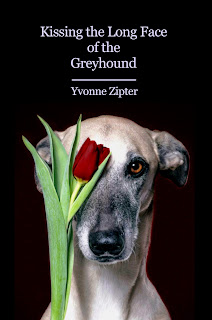 The following is the eleventh in a series of brief interviews in which one Terrapin poet interviews another Terrapin poet, one whose book was affected by the Pandemic. The purpose of these interviews is to draw some attention to books which missed out on book launches and in-person readings. Dion O'Reilly talks with Yvonne Zipter about discovery in poetry, dealing with difficult topics, poetry and religion, and finding solace in poetry.

Dion O’Reilly: Nature, or what we now call The Living World, is a prominent feature in your poetry. Do you consider yourself an eco-poet?

Yvonne Zipter: I’ve never actually thought about it, but I think that’s a fair label to apply to my work. If ecopoetry explores “the relationship between nature and culture, language and perception,” as Forrest Gander posits in The Ecopoetry Anthology (eds. Ann Fisher-Wirth and Laura-Gray Street), then it makes perfect sense to apply that term to my work. Kissing the Long Face of the Greyhound, for instance, is organized roughly as a dialogue between the natural world and humans, the intent being to show how they—we—are interrelated. But I tend to agree with Naturalist Weekly that “labels can be challenging for readers and writers. They have a tendency to limit our ability to see the world. One of the things I really appreciate about poetry is that any given poem may produce different meanings to different people. . . . Any poetry that gets you to think about your role or place in the natural world is beneficial and . . . the labels we give them are only helpful if they contribute to the joy of the audience.” That said, I would be honored to be thought of as an ecopoet.

Dion: Do you strive to take turns in your poems, what we call voltas or peripeteia? In other words, do you seek a deeper layer, what Robert Frost called surprise and what many poets call discovery?

Yvonne: For me, part of the joy of writing poetry is discovering what the poem is about as I’m writing it. That surprise or discovery, to my way of thinking, is an important component of a compelling poem, not only for me as the poet but for the reader as well. The delight I feel when an out-of the-ordinary perspective emerges regarding some ordinary thing—I want the reader to feel that delight as well. A poem for which the significance of the subject remains opaque to me is never successful. I end up trying to force a revelation, and the resulting poem feels empty, too glib, uninspired—boring. What I aim for in my poems is being able to take the reader along with me in the process of seeing something in a new way that might ordinarily be taken for granted. Well, that’s not quite true—I write for myself, for the joy of learning something I knew but didn’t know I knew. It’s only afterward that I think about the reader.

Dion: How do you feel poetry should deal with what some call, perhaps unfairly, darkness—topics like death, pain, "the slings and arrow?"

Yvonne: Pain, death, and adversity are common to every living being and are thus topics that should be universally relatable. As a poet, writing about these difficult topics has not only given me solace but has also been a way for me to find beauty and/or poignancy about some of life’s least pleasant moments. The hope is that such poems can allow readers to think about their difficult moments in a new way and/or help them process their own pain or grief. At the very least, poems on topics such as these let people know they are not alone in what they’ve been through.

However, much as with love poems, poems about pain and death are hard to write without falling into abstractions and clichés. I often have to let months or years pass before I can write a poem about something dire that has happened before I can focus on the kinds of details that will let me tell the reader “this was awful” without telling them that.

Dion: You have a few poems which could be interpreted as having a theme of religion versus spirituality—"Still Waters" and "Manners of the Flesh" come to mind. Is this a theme you grapple with?

Yvonne: Religion, in my poems, functions as a sort of shorthand—like myth, in a way—to convey a lot about a subject without having to elaborate in great detail because the themes, terms, et cetera are well-known. I think of myself as a spiritual person. When it comes to traditional religion, I consider myself to be an atheist, but I was raised going to church (three different denominations, actually—Lutheran, Methodist, and Unitarian) and my wife is Catholic, so despite my beliefs, I am nevertheless steeped in this culture. But because I use religious imagery so often in my poems, my wife sometimes teases me that I’m the worst atheist ever. “Manners of the Flesh” was actually written for a friend of mine who has struggled with his own relationship to religion, especially during the time his sister was dying, hence the ambivalence about heaven, prayer, and so on, whereas in “Still Waters” I use the terminology of religion to express my reverence for nature and the awe I often feel in its presence—in other words, as a way to put spirituality on the same plane as religion.

Dion: Danusha Lameris talks about poets having a solace and an irritant. The irritant feels broken or off-kilter and inspires them to speak. But poets also often experience a solace, a relief from that irritant. It appears that the Living World (nature) and your dogs are a solace for you. Would you say that is true? And what is your irritant?

Yvonne: You’ve hit the nail right on the head: nature, including pets, is definitely a place of refuge for me. When I’m looking at a Cooper’s hawk in flight or hugging the dog, I’m not thinking about the precarious nature of our democracy or inequities of race and class. As a kid, I immersed myself in nature, haunting the nearby creek for frogs and garter snakes, climbing trees, and chasing bumblebees and fireflies trying to catch them in a jar so I could watch them up for a while close. But as I got older, I drifted away from the natural world. There was always so much else to do—studying, reading, learning what it was to be a feminist, to be queer. But as things began to slow down a bit, with a steady job and long-term relationship, I found myself drawn to nature again.

As for an irritant, I have a few, from racial inequities to political skulduggery. But these irritants overwhelm me in a way that, for the most part, makes it hard for me to write poetry about them without sounding shrill and prosaic. But then, that gives me something to work toward.


Sample poem from Kissing the Long Face of the Greyhound:

—for Easton, Zooey, and Nacho

Cancer loves the long bone,
the femur and the fibula,
the humerus and ulna,
the greyhound’s sleek physique,
a calumet, ribboned with fur
and eddies of dust churned to a smoke,
the sweet slenderness of that languorous
lick of calcium, like an ivory flute or a stalk
of  Spiegelau stemware, its bowl
bruised, for an eye blink, with burgundy,
a reed, a wand, the violin’s bow —
loves the generous line of  your lanky limbs,
the distance between points A and D,
epic as Western Avenue, which never seems to end
but then of course it does, emptying
its miles into the Cal-Sag Channel
that river of waste and sorrow.
I’ve begun a scrapbook:
here the limp that started it all, here
your scream when the shoulder bone broke,
here that walk to the water dish,
your leg trailing like a length
of   black bunting. And here the words I whispered
when your ears lay like spent milkweed pods
on that beautiful silky head:
Run. Run, my boy-o,
in that madcap zigzag,
unzipping the air.

Yvonne Zipter was born in Milwaukee, WI, and following sojourns on both coasts, has replanted herself firmly again in the Midwest. She lives in Chicago with her wife and a long succession of retired racing greyhounds. She is the author of the poetry collections Kissing the Long Face of the Greyhound, The Patience of Metal (a Lambda Literary Awards finalist) and Like Some Bookie God; the nonfiction books Ransacking the Closet and Diamonds Are a Dyke's Best Friend; the novel Infraction; and the nationally syndicated column "Inside Out,"which ran from 1983 to 1993. Her poems have been published widely in periodicals.
www.yvonne-zipter.com

Dion O’Reilly’s prize-winning book, Ghost Dogs, was published in February 2020 by Terrapin Books. Her poems appear in Cincinnati Review, Poetry Daily, Narrative, The New Ohio Review, The Massachusetts Review, New Letters, Journal of American Poetry, Rattle, and The Sun. She is a member of The Hive Poetry Collective, which produces podcasts and radio shows, and she leads online workshops with poets from all over the United States and Canada.
www.dionoreilly.wordpress.com