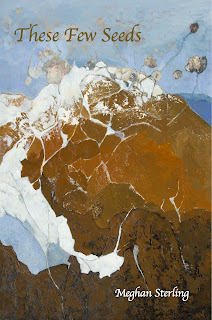 The following is the twelfth in a series of brief interviews in which one Terrapin poet interviews another Terrapin poet, one whose book was affected by the Pandemic. The purpose of these interviews is to draw some attention to books which missed out on book launches and in-person readings. Robb Fillman talks with Meghan Sterling about poetry and place, poetry and parenting, the function of titling, and poetry and form.


Robert Fillman: Thank you, Meghan, for taking a moment to chat with me about your ambitious debut collection, These Few Seeds, which I loved! The book covers a lot of ground—Brooklyn, London, Greece, California, New England, Texas—was your intention to evoke place (and a range of places) when you set out to write this collection? Or did you have some other governing principle in mind?

Meghan Sterling: It is a whirlwind, isn’t it? A big part of my life has been traveling the world—it was actually in Peru that I decided to have my daughter. As my first collection, I wanted to give it the breadth of my life, all that came before that delivered me to my daughter, as it were, that made me the person who could be her mother, who could mother at all. Traveling also gives me a broader sense of grief about what we are losing to climate change. And she may not take after me, but if she does, I hope she can travel a world that still has sacred and pristine spaces.

Robb: So many of the poems in These Few Seeds are tender representations of motherhood. And yet, they are often textured by an awareness of the environmental crises that threaten to upend intimate moments with your child. Could you talk about the feelings you are working through as you bring these themes together?

Meghan: There is a sharpness in intense joy that sometimes carries the resemblance of intense grief with it. When I was pregnant with my daughter, the wilderness around Asheville, NC, where we were living at the time, was on fire, and Asheville was a bowl of smoke. Australia was on fire, California was on fire, and the Amazon was on fire. The world was on fire. It has been on fire in every way since that time. With my daughter's tender growing comes the grief and uncertainty that this world deserves her, or that the parts that do will survive long enough to become part of the landscape that shapes her. And I write into that fear and sorrow and love.

Robb: I appreciate that the phrase "these few seeds" (which is, of course, the title of the book) appears in the last line of the final poem. It keeps the reader in suspense, waiting for that revelatory moment! Would you walk us through how you arrived at the title of the book and how you see that metaphor operating for the collection as a whole?

Meghan: Oh, titling. I went through so many titles. It took me months. I went from long titles to one word titles—I tried everything. By the end, I knew I wanted something that was three words and contained assonance. I had been inspired by my friend and fellow poet Suzanne Langlois’s chapbook titled, Bright Glint Gone. I loved the clean brevity of it, and the sound of it.  Diane Lockward (publisher of Terrapin Books) and I worked together to search through the manuscript for just the right three-word phrase—and she found it!

Robb: I admire a poet that embraces different forms. Free verse clearly dominates the book, but each of the five sections of These Few Seeds experiments with line and stanza length. In fact, it is rare to see two poems in the collection adopt an identical form. Can you explain how you arrive at the formal structures of your work?

Meghan: I love playing with forms. I started out as a formal poet who has branched into the world of free verse and modern sonnets. However, I love to play with the way a poem looks on the page. One criticism I got early on was that my poems were just blocks of text on the page, so I am sensitive to create space and variety.

Robb: I loved so many of these poems: "Morning Prayer," "The Absence of Birds," "Man Subdues Terrorist with Narwhal Tusk on London Bridge," "Adeline," "Apology After the Fire." I could go on! If you had to pick a single poem from the book that means the most to you (for whatever reason), which would it be—and why?

Meghan: I have a few. “Still Life with Snow,” “Jew(ish),” and “All That I Have is Yours” are some that jump to mind, but my very favorite is probably “Weaning.” It captures some of the raw feeling, the intense physical love between a mother and child, that I really didn’t know existed until I had my daughter. That deep, powerful, physical love has changed me utterly. That poem captures the anguish at each layer of losing a closeness with her. It was the first one—weaning her. There have been more since, and so many more to come. But when I read that one, I cry a little, every time. And that makes me feel like I got at the truth of something, which is, ultimately, why I write poems.

Sample poem from These Few Seeds:

It fell away, that slant of light
that followed us across the North Sea,
across a stable yard, hoofmarks
sunk into the frozen mud. The way the barn
cut the night in two, the hay steaming,
the chickens soft in the roost. I had dreamt
us before we ever came to be, clutching the cold
like a talisman against the bruising of old dreams,
against the inevitable age that would grip us
in its fulsome mouth, a dog in the stable yard
mawing its one mean bone. And what sky was left
was hollowed moon and piecemeal as a memory
of what I thought I could be if only love would
find me, traveling the Arctic of my heart,
gnawing its white bone.

Meghan Sterling’s work was nominated for four Pushcart Prizes in 2021 and has been published in Rattle, Colorado Review, Idaho Review, SWIMM, Pinch Journal, and elsewhere. She is Associate Poetry Editor of the Maine Review. Her first full length collection These Few Seeds (Terrapin Books) came out in 2021. Her chapbook, Self Portrait with Ghosts of the Diaspora (Harbor Editions) will be out in 2023.
www.meghansterling.com

Robert Fillman is the author of the chapbook November Weather Spell (Main Street Rag, 2019). His poems have appeared in such journals as The Hollins Critic, Poetry East, Salamander, Sugar House Review, Spoon River Poetry Review, and Tar River Poetry. His criticism has been published by ISLE: Interdisciplinary Studies in Literature and the Environment, CLAJ: The College Language Association Journal, and elsewhere. He holds a Ph.D. in English from Lehigh University and teaches at Kutztown University. His debut full-length collection, House Bird, was published by Terrapin Books in February 2022.
http://www.robertfillman.com