Bits and Pieces of This and That 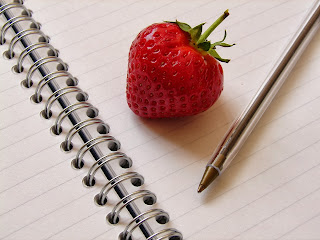 It must be fall. Writing news is coming in.

First, the local The Alternative Press (TAP), an online newspaper, did an article about my new book, The Crafty Poet: A Portable Workshop. Read it at TAP.

Then along came two very nice reviews of the book. The first, by Martha Silano, appears at Blue Positive. This is a thorough review of the book. I especially like how Martha, herself a fantastic poet, describes how she has been putting the book to use. She received the book just as she was beginning a poem-a-day challenge, so the timing was perfect. It made me happy to know that the book has provoked some new work from Martha's pen. Martha says ". . .this is a poetry exercise/craft tip book poets (and English instructors) only dream about. . ." Read the review at Blue Positive.

The second review is by Kelli Russell Agodon at Book of Kells. Kelli says, "What I like about this book is that it offers you poems, prompts and even interviews." Referring to the subtitle, she says, "The book is definitely a portable workshop that you can use by yourself or with a group." Good, that's just what I intended it to be. Read the review at Book of Kells.

I'm happy to have a poem in the new issue of Rose Red Review. This journal is in its second year and puts out three issues per year. Editor Larissa Nash does a very nice job with the journal which focuses on fiction and poetry related to fairy tales and magic. My poem is The Color of Magic.

I also have a poem in Prime Number Magazine. This online journal posts a very limited number of poems every other month, then gathers them into a print volume at the end of the year. The poetry editor is Valerie Nieman. My poem, By the side of the road, is followed by a one-question Q&A.

Posted by Diane Lockward at 11:41 AM No comments:

Calling all NJ poets and poetry lovers! Please join us this Sunday, September 29, for this Poetry Reading. Two NJ poets, Sandra Duguid and Charlotte Mandel, will read work from their new books. The books will be available for sale and signing. I'll be providing the introductions.

If that's not enough for you, there will be a Reception following the reading. With refreshments! 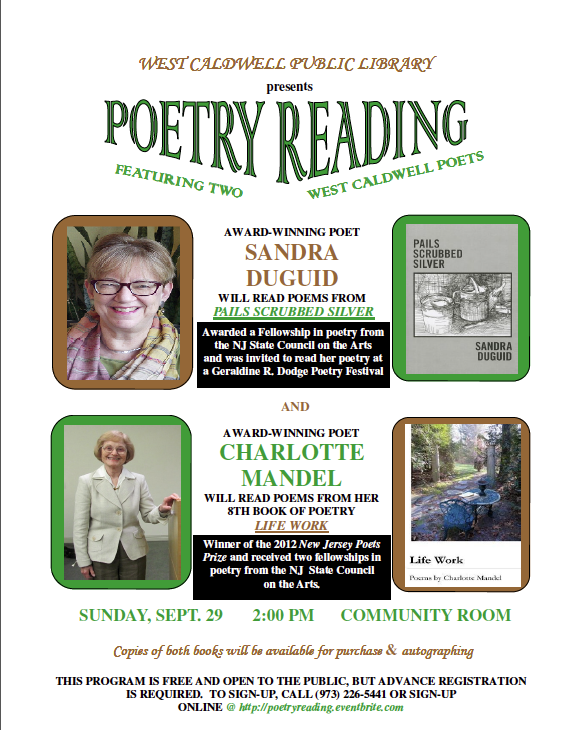 Posted by Diane Lockward at 10:19 AM No comments: 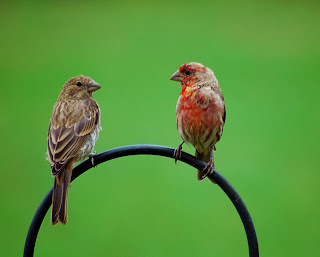 Kwame Dawes, the editor of Prairie Schooner, has penned a blog piece entitled Memos to Poets: A Twitter Journey. This is a fantastic list of 110 tips for poets, all of them full of wisdom. I jumped on #4:

Only one poem about writing poems a year. They are all the same poem written when we have nothing to say.

I could not agree more with this. I am so sick of poems about poems. So many of them have been written that each new one feels like a cliché. Each time I come across yet one more, I groan, Oh no, not this again. I often just move right to the next poem.

Two offenses that particularly bug me:

Violation #1: The poem that titles itself with the word "poem." For example, we might find "Poem about Birds." What a lazy title! Such a title is evidence of a poet with a disengaged imagination. And am I such a stupid reader that I won't know this is a poem unless I'm told? Can't I tell just by looking at the poem that it's a poem? Isn't the appearance, the shape of a poem one of its distinguishing characteristics?

So what's this poet supposed to do with his or her dull title? Brainstorm a list of better titles.

Alternatives to "Poem": Meditation, Song, A Theory of, Musings, Contemplation, Daydream, Reflections, A Study of, Pondering, Ode to, In Praise of, A Curse Against.

Just constructing such a list might suggest new ideas for the poem as well as for the title. Perhaps the poet will decide, for example, that "Birds" is rather vague and focus the poem instead on Robins, Goldfinches, or Mourning Doves.

A few examples from the past: "The Lark Ascending" (George Meredith), "To a Skylark" (Shelley), "Ode to a Nightingale" (Keats).

John Frederick Nims got away with titling a poem "Love Poem." And what a great poem it is. But he did it, so you shouldn't.

Violation #2: The poem that appears to be about one topic, then towards the end announces itself as a poem. For example, the poet is writing a lovely poem of description. He's evoking the setting so well I almost feel transported. And then comes something like this: And that's why I decided today to sit here and write this poem about blah, blah, blah.

What a cheap way to end a poem. What an evasion. What a disappointment. What laziness. It's like one of those short stories that instead of offering a real resolution ends with the main character waking up from a dream.

This poet needs to continue to write that poem. Get into the spot where the flop begins and write some more. Spend days, weeks on it. No stopping until something is zinging and singing.


I should perhaps confess that my best traveled poem has the word "Poetry" in the title. Having done that once, I will never do it again. Why not? Because I've done it. Dawes allows you one poem about writing poems a year. I allow you one in a lifetime.

Posted by Diane Lockward at 8:37 AM 4 comments: 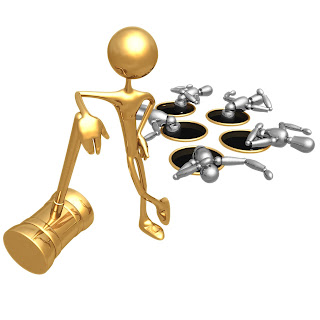 Posted by Diane Lockward at 9:49 AM 2 comments: