Years ago I attended a reading for the poet Charlotte Mandel. That was the first time I'd met her or heard her read. I was at the beginning of my own writing of poetry. Charlotte was in the midst of her long career as poet and publisher. After that first meeting, we met over the years at other poetry events as we're both NJ poets and lived close to each other. Since then, she has moved to the same town I live in and we often attend events together. It is my great pleasure to now call her my friend.

Yesterday I attended a book party for Charlotte's latest book, To Be the Daylight, her tenth collection, a book I was happy to blurb. The reading was held at our local library and was well attended by relatives, people who live in Charlotte's residential complex, students from the local university, and old friends. We all enjoyed a wonderful reading as Charlotte read both form poems and free verse ones—she is equally adept at both.

Here's one of the poems she read, a favorite of mine from her book and which I was proud to first publish in my craft book, The Crafty Poet II: A Portable Workshop. The form is called Rimas Dissolutas. See if you can figure out its rules.

Of Clocks and Love

The radio reports conceptions of time—
that two clocks traveling at different speeds
can vary by seconds, minutes and hours.
Physicists surf waves on cosmic oceans.

A poet poor in math, I feel stymied
when scientists operate by creeds
near to religion, aiming telescopic power
to digitize mysteries of creation—

as the universe expands, space/time
swirls in a blender, milky ways bleed
ancient fires, one black hole devours
another.  What simple harmonic motion

set off this wild yo-yo we call sublime?
4.3 babies are born every minute. I meet
with joy a great-grandson—and with fears
of drought-shriveled fruits, earthquake implosion.

Still, I cross off calendar days, set a time
the radio sings me awake.  Little one, reach
out your arms to those who will adore
the beauty of your body/soul's creation.

I took some pictures and hope they will give you a sense of the reading. 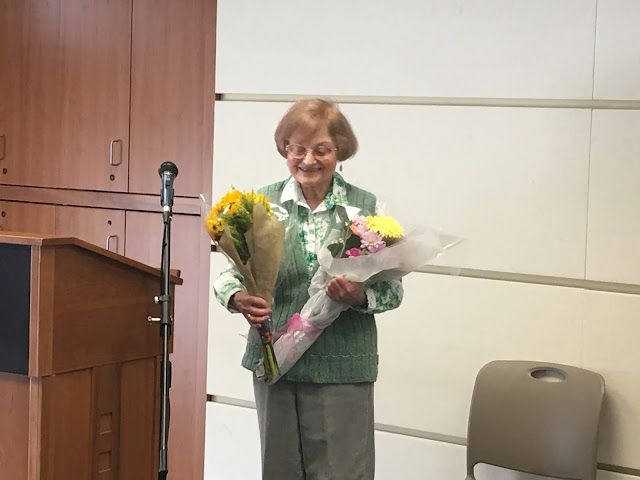 After the reading, Charlotte was presented with two bouquets,
one from her family, one from the library 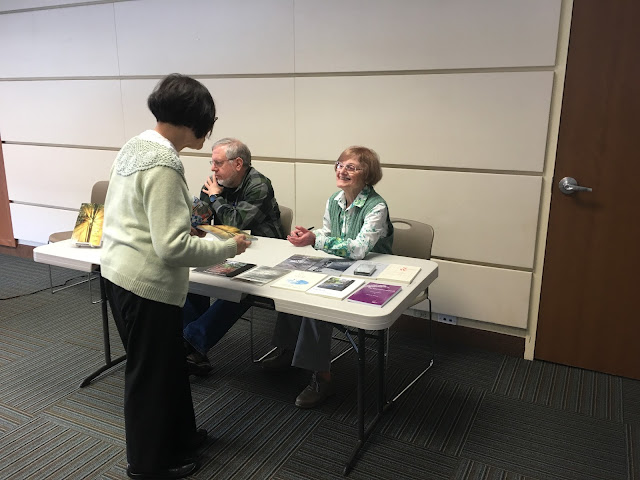 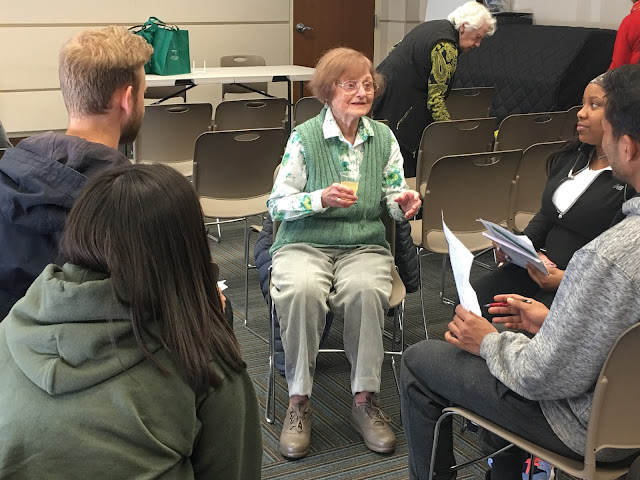 After the event, Charlotte graciously met with a group of students
from Caldwell University and was interviewed by them.

This was a lovely day and a wonderful reading. It was a privilege and a pleasure to be in the audience.

Email ThisBlogThis!Share to TwitterShare to FacebookShare to Pinterest
Labels: charlotte mandel, kelsay books, poetry reading, to be the daylight

Several years ago eBookit.com made an ebook version of my first print craft book, The Crafty Poet: A Portable Workshop. I was very pleased with their work and would happily recommend them to anyone in need of the services they provide. They are efficient, communicate well with their clients, and provide great work. I was, in fact, so pleased that I also used eBookit for the ebook version of The Crafty Poet II.

Recently, eBookit branched out into offering conversion of print books into audiobooks. It never occurred to me that I might want that, but one day they contacted me and said that because my ebook had been a consistent bestseller with them, they would like to do a complimentary audiobook of The Crafty Poet.  Of course, I said, Sure!

A month or so later the audiobook was finished. The recording was done by Lily Ricciardi, one of eBookit's professional readers. She has a beautiful voice and did a great job. The book is reproduced in its entirety except, of course, for the Table of Contents, the bio notes, and the Index.

I wondered initially how someone might use an audiobook of this sort, as opposed to, say, a novel. But it seems that people are enjoying it as they go walking and as they pound away on the treadmill. Some listen and learn in bed. Someone told me she begins her morning writing session by listening for 10 minutes; what she hears then inspires her writing that day. Excellent! Others listen while traveling in the car or plane. Obviously, I had a lot to learn about audiobooks.

This audiobook of The Crafty Poet is available at Amazon. It's free along with an additional free audiobook if you sign up for a free trial of Audible. If you just want to buy it outright, it's priced at $17.46. Odd price, but that's it.  Of course, the print book is still available if you don't yet have that. Either way, print, ebook, or audiobook, you get lots of craft tips by some of our finest contemporary poets, model poems and prompts, bonus prompts, and Q&As about individual poems with the poets who wrote the poems.

Visit any of The Crafty Poet pages to hear a sample of the audiobook.

Posted by Diane Lockward at 11:38 AM No comments:

Some Revision Ideas for Poetry Month

I'm posting here the Craft Tip I contributed to my craft book, The Crafty Poet II: A Portable Workshop. You might find it helpful as you work on new poems this month. You might also find it useful for working on poems you wrote months, or even years, ago. Enjoy! And prosper!

During revision discussions, we poets hear a lot about compression, reducing clutter, and cutting out the non-essential. Who hasn’t sat in a poetry class or workshop and been told that less is more? So when someone tells us to add more, to expand, to keep going, we might be hesitant to pay attention.

But we should pay attention. The less-is-more principle is often good advice, but it’s not always good advice. As I once heard Mark Doty say, Sometimes more is more.

Too often we start revising and hacking away at the poem before it’s even fully written. We quit before we’ve given the poem life, before we’ve discovered its full potential, before we’ve found its real material.

Stephen Dunn addresses the topic of revision in a 2007 interview in The Pedestal Magazine:

A fairly new experience that I’ve been having is revision as expansion. Most
of us know about revision as an act of paring down. Several years ago, in
looking at my work, I saw that I was kind of a page or page and a half kind of
poet, which meant that I was thinking of closure around the same time in every
poem. I started to confound that habit. By mid-poem, I might add a detail that the
poem couldn’t yet accommodate. That’s especially proven to be an interesting
and useful way of revising poems that seem too slight or thin; to add something,
put an obstacle in. The artificial as another way to arrive at the genuine—an old
story, really.

Before you begin to strip down your poem or abandon it as no good or decide it’s good enough as it is, first consider how you might expand your poem. The following expansion strategies just might help you to discover your poem’s true potential and arrive at the genuine.

1. Choose a single poem by someone else, one that has strong diction. Take ten words from that poem and, in no particular order, plug them into your own draft. Make them make sense within the context of your poem, adjusting your context as needed. Or let the words introduce an element of the strange, a touch of the surreal.

2. Find the lifeless part of your poem. This is often the part where your mind begins to wander when you read the poem aloud. Open up space there and keep on writing in that space. Repeat elsewhere if needed. Remember that freewriting can occur not only while drafting but also while revising.

3. Find three places in the poem where you could insert a negative statement. Then go into the right margin of your draft and write those statements. Add them to the poem. By being contrary, you might add depth and richness to the poem.

5. Put something into your poem that seemingly doesn’t belong, perhaps some kind of food, a tree, a piece of furniture, a policeman, or a dog. Elaborate.

6. Add a color and exploit it throughout the poem. This is often a surprisingly effective enlivening strategy, one that can alter the tone of the poem.

8. Look up the vocabulary of an esoteric subject that has nothing to do with your poem. The subject might be mushroom foraging, astronomy, cryogenics, perfume-making, bee keeping, the Argentinian tango, or zombies. Make a list of at least ten words. Include a variety of parts of speech. Import the words into your poem. Develop as needed.

9. Pick any one concrete object in your poem and personify it throughout the poem. For example, if there’s a rock, give it feelings, let it observe and think, give it a voice. As the object comes alive, so may the poem.

10. Midway or two-thirds into your poem, insert a story, perhaps something from the newspaper, a book you’ve read, a fable, or a fairy tale. Don’t use the entire story, just enough of it to add some texture and weight to your poem. Your challenge is to find the connection between this new material and what was already in the poem.

Now go into your folder of old, abandoned poems, the ones you gave up on when you decided they just weren’t going anywhere. Then get out some of your recent poems that feel merely good enough, the ones that never gave you that jolt of excitement we get when a poem is percolating. Finally, return to some of the poems that you’ve submitted and submitted with no success, those poor rejects.

Mark all of these poems as once again in progress. Now apply some of the expansion strategies and see if you can breathe new life into the poems. Remember that this kind of revision is not a matter of merely making the poem longer; it’s a matter of making the poem better.