Finding the Right Cover Art for Your Poetry Book 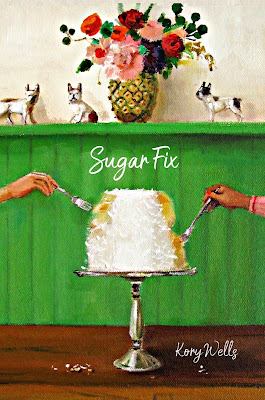 I like to work collaboratively with my Terrapin poets on cover design. Once a manuscript has been accepted, I ask the poet if he or she has any initial ideas in mind. Some know immediately what they want and have already selected a piece of art. If I like it too, we go with it. Other poets have no idea, but most are somewhere in between. That’s when we begin the hunt for the perfect cover. The hunt usually takes some time, but it’s an enjoyable, exciting process. Following is a Q&A with Kory Wells whose poetry collection, Sugar Fix, was recently published by Terrapin Books. I’ve invited Kory to talk with me about our search for her perfect cover.

Diane Lockward: Most poets begin to imagine a cover for their book as soon as the manuscript is accepted. When you learned that Terrapin Books had accepted your manuscript, what cover images came into your head? What expectations did you have for your cover?

Kory Wells: While I was still revising the manuscript, I had the idea that I might like the cover to include or somehow suggest an image of a red velvet cake, after one of the poems in the collection. I'd also caught a bit of inspiration from the photography of Jill Wellington, whose stock images I've used to promote some individual poem publications on social media.

Despite these ideas, at the very beginning of the process with Terrapin, I was trying to keep my expectations largely in check! I'd had some frustrations working with the publisher of my chapbook to arrive at a cover we both liked. For Sugar Fix, I was thrilled that you wanted my ideas and confident that even though I might not get my first pick, I’d ultimately get a cover I was happy with since Terrapin has consistently produced attractive books. Of course your covers are on your website, but I'd purchased several Terrapin titles before I ever submitted to you. As an author, I think it's imperative to know a press produces a book you'll be proud of.

Diane: How did you go about searching for a good image?

Kory: First of all, I pulled books of all genres from my shelves to consider what really stood out to me. I realized I wasn't against using a photo, but I gravitated more toward some sort of painting or collage.

Next I made a private Pinterest board to share with you some of these images and other cover ideas. I made notes on what I liked about certain covers: the collage on Cecilia Woloch's Carpathia, the fonts and whimsy of Kim Sunée's A Mouthful of Stars, and the intriguing surreal painting on Ashley Seitz Kramer's Museum of Distance, just to name a few. Although my cover doesn't look particularly like any of these, I see now how they informed our path.

Diane: I recall that the first image we seriously considered for the cover of Sugar Fix was a single slice of red velvet cake on a plate floating in air. It initially seemed perfect for your book which several times references red velvet cake. We both loved that image. I enhanced the colors, then muted them. I worked up several sample covers. You did too, but we ended up not using the image. Tell us why we had to abandon it.

Kory: I am quite taken with the work of Charles Keiger, and as you say, his red velvet cake was so tempting to use. On his blog he even says that the painting to him is about nostalgia and longing, two themes that  occur in Sugar Fix. Ultimately, though, the image didn't pass my gut check. Although some of the poems in the book turn toward darkness, the painting felt too moody for the collection as a whole. Some might consider this a poor aesthetic, but I wanted a cover that simply made me feel happy when I looked at it.

Diane: I recall that you next zeroed in on the art of Janet Hill. What attracted you to her work?

Kory: I'd discovered Janet Hill not too long ago when I was adding images to my Pinterest board "The Art of Reading," paintings that show people engaged with books. To me, much of Hill's work is a delightful combination of romantic and quirky; they feel vintage and yet contemporary. Her paintings have a charm that seems very Southern (although Hill lives in Ontario) and are at times darkly comic. I like to think all those same descriptions apply to Sugar Fix.

Diane: You found a kitchen image by Janet Hill that we liked, but I felt it was too similar to the cover of another book that Terrapin had just published. Then there was another one we liked, but when I contacted the artist we learned that it was no longer available. How did we finally arrive at the image we used?

Kory: I confess I still think about that evocative kitchen scene with a teal refrigerator (teal is my favorite color)! But I totally understood Terrapin's need for a different look. I used Canva to make mock-ups of our two final choices, printed and trimmed them to actual book size, and road-tested on my family members. You made some mock-ups with your cover software. Neither of us could argue with the results: the coconut cake on that vibrant green background caught everyone's eye!

Diane: Once we’d settled on the image and obtained the artist’s permission to use it, how did we arrive at the final design? 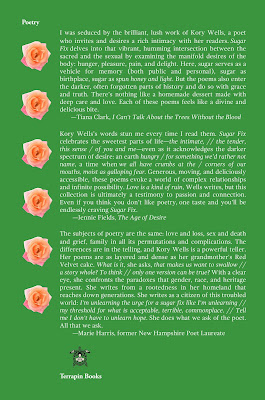 Kory: The painting itself more or less pointed us to the position of the title and other text; I think deciding the font for the cover was the most important decision. All along I'd leaned toward a script, and you sent several choices. Again, I was printing out options and laying them on the kitchen table to "live with" for a bit. The back cover was all yours—and though the graphic element is a rose, it's delightfully close to a buttercream rose!

Sugar Fix is available at Amazon, B&N, and the Terrapin bookstore.

Posted by Diane Lockward at 2:14 PM No comments: