Terrapin Books Is Open for Submissions

I am happy to announce that my poetry press, Terrapin Books, is currently open for submissions of full-length poetry manuscripts. Please note that our submission period closes on February 28, 2018.

Be sure to read our Guidelines before submitting. Please note that we request both a bio and a descriptive statement with your submission. Be sure to include both. Most questions are answered in our FAQs, so be sure to read that page also.

Our Guidelines ask for a manuscript of approximately 40-55 poems for a book of approximately 90-110 pages (count includes poems, front and back matter, and section pages). Please note that your book will be longer than your manuscript. If you have 40-55 poems, go ahead and submit. Let us worry about book length.

Here's some general information about the press:

We publish only poetry books, primarily single-author collections but also an occasional craft book or anthology.

Terrapin Books is committed to publishing outstanding books of poetry by outstanding poets. We intend to fully support our poets. We will edit your manuscript and work with you on revisions. We expect our poets to actively engage in promoting their books. We require our poets to maintain a dedicated website and to be a member of Facebook.

We are committed to publishing accepted titles within six months of acceptance. We do not maintain a long list of books-in-waiting.

We offer a standard contract, a generous number of author copies, a substantial discount on additional copies purchased by the author, and an annual royalty payment.

We welcome submissions from poets at any stage in their career. Some of our poets have a long publication history with multiple books. A few of our poets have two books out. And we are very proud to be the publisher of two debut collections.

We look forward to reading your work.

Posted by Diane Lockward at 11:28 AM No comments:

To Resubmit or Not to Resubmit: That Is the Question 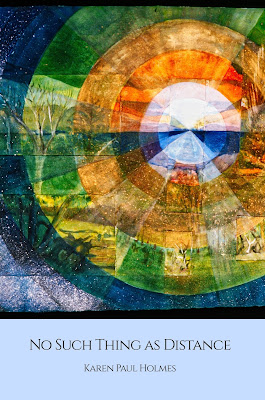 As the publisher of Terrapin Books, I am frequently asked this question or some variation of it: If my manuscript was submitted to your press and rejected, should I resubmit it? Does it make sense to do so?

It occurred to me that it might be useful to have a discussion about this subject, so I invited Karen Paul Holmes, who once asked me this question, to participate in a Q&A. Karen’s new poetry book, No Such Thing as Distance, will be published by Terrapin Books with a release date of February 1, 2018.


Diane:   You submitted a manuscript to Terrapin Books during the first open reading period in January 2016. When it was rejected, were you given any actionable feedback? If so, what was it?

Karen:   Yes, and I really appreciated it. You suggested that the manuscript should not be frontloaded with my childhood and parent poems, but rather, those themes should be braided throughout. Other suggestions were to enhance the music/dancing motif and to include more poems that weren’t in first person.


Diane:  Did you follow those suggestions at the time? Why or why not?

Karen:  I revised and re-ordered the manuscript many many times, and yes, I took the advice before submitting to other presses.


Diane:  You did not resubmit to Terrapin for the following two open reading periods. During that year, were you submitting your manuscript elsewhere? If so, what was the outcome of those submissions?

Karen:  I submitted to a few more contests and open reading periods. I had no feedback with the rejections except from one editor, who also said that re-ordering the poems was needed. (He had seen an earlier version similar to the one I sent Terrapin the first time).


Diane:  What made you eventually decide to resubmit to Terrapin?

Karen:  I had seen what a good job Terrapin had done to publicize its books. I admired your own poetry and The Crafty Poet books you edited. I also respected your dedication to publishing good poetry and looking after your poets. I knew you read the submissions yourself, and that was important to me, as well as the fact that you’d actually edit the book rather than just accepting what I submitted.


Diane:  How did you revise the manuscript? Were poems added or removed? Were structural changes made? How satisfied were you with those changes?

Karen:  I added and removed poems many times so that I probably ended up with about 15 versions of the manuscript. It continued to evolve as I wrote new poems and tried different approaches to the whole.

I totally re-thought the structure from many angles. I even tried to make it a chapbook at some point, but just couldn’t pare it down that far. I made a spreadsheet listing each poem’s voice, theme and subtheme, narrative chronology, and form (prose vs couplets vs no stanzas, etc), so that I could consider how the poems related to each other in different ways. I wanted a somewhat logical narrative flow without it being too predictable nor having jarring jumps between poems. I was using recipes as section dividers, so the order within the sections needed to make sense.


Diane:  When you then resubmitted to Terrapin, what happened?

Karen:  It got accepted very quickly!


Diane:  Following acceptance, what process did your manuscript go through?

Karen:  As you will remember, you and I went back and forth on some line edits and other specific changes. I can’t say this wasn’t somewhat stressful for me, because, you know, those lines were sometimes my darlings! But I wanted an editor like you and appreciated your dedication to making it as good a book as possible.

You deleted nine poems that you felt weren’t as strong as the rest, and I was okay with that. You also asked me to add a couple of my poems that you’d read in journals. The order didn’t change much, but you wanted the recipes to be in the back of the book, and I liked that idea. You also gave me written instructions on how to list and format the acknowledgments for poems that had been published elsewhere. While revisions were being made, I asked for blurbs, and three poets were willing to provide them rather quickly.

Once the edits were complete, it was time for the interior layout of the book. You were very quick, and I found very few errors when proofreading the formatted manuscript. I loved the font and style you chose. I also had a trusted friend proof it for me. You and I discussed cover art, and when I suggested a painting by my sister, you enthusiastically agreed. Then we went back and forth on the cover design until a final design was chosen.

As we were wrapping up final details, my beloved dog died. Then, even worse, 10 days later, my life partner had a fatal heart attack. Needless to say, I couldn’t carry on very well. You were kind and moved the publication date to almost two months later, so that I could have a chance to get my bearings. Needless to say, the launch of my book is bittersweet. My beloved was a huge believer in my work, and he was as excited as I was for my second collection. I will be buoyed up by his faith in me as I do readings and other promotional activities.


Diane:  Given your own experience, what advice would you give to someone considering resubmitting to a press that previously rejected the manuscript?

If no feedback was given, I’d urge the poet to be sure to put strong and unusual poems in the front, but also to make sure there are strong poems throughout. Since poets often have a hard time determining which poems are strongest, getting feedback from others helps.

It’s also wise to have someone else read the manuscript, paying attention to whether the order works. The weaving of like-themes throughout the book is very important, because it adds interest and pulls the reader through. I think we poets tend to want to lump like poems together, and that was my first impulse, but I became convinced otherwise.

I have heard that poets should re-submit to presses that have different readers during the next open reading period or contest, because the manuscript might appeal to these new readers. Whether or not there are different readers, the competition will be different each time—a poet’s manuscript might stand out from the pack when it didn’t before, especially if it’s been revised with care. One hears stories over and over of writers who sent their books out for years before being published—perseverance definitely pays.


Karen Paul Holmes is also the author of Untying the Knot (Aldrich Press 2014). She is a past recipient of an Elizabeth George Foundation writing grant and was named a “Best Emerging Poet” by Stay Thirsty Media in 2016. Her work has appeared in such journals as Prairie Schooner, Crab Orchard Review, and Poet Lore. She is the founder and host of the Side Door Poets in Atlanta and the Writers’ Night Out in the Blue Ridge Mountains. Following a corporate career in marketing communications, she now works as a freelance writer. She lives in Georgia.


Karen's book, No Such Thing as Distance, is now available for Ordering.

Please read our Guidelines and our FAQs.

Posted by Diane Lockward at 11:39 AM No comments: