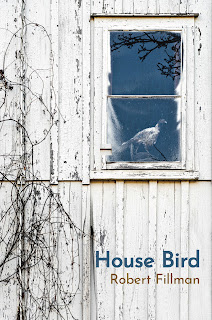 The following is the tenth in a series of brief interviews in which one Terrapin poet interviews another Terrapin poet, one whose book was affected by the Pandemic. The purpose of these interviews is to draw some attention to books which missed out on book launches and in-person readings. Meghan Sterling talks with Robb Fillman about masculinity and poetry, parenthood and poetry, ordering poems in a manuscript, and more.

Meghan Sterling: The poems in House Bird, which are lovely, have a thread of masculinity/an examination of men and manhood running through them, both painful and yearning. Can you talk about how you came to a place of writing about manhood? What do you feel is most urgent about doing so?

Robb Fillman: To be honest, I don’t believe it was a conscious act. In other words, I did not set out to write about masculinity per se. I think I started writing poems about the relationships I had with the people around me—my wife, my children, my father, my grandfather, my uncles, my childhood friends, and so on—and I started thinking about what it means to be a father, a husband, a son, a brother. And it wasn’t until well into writing that I noticed that I was actually trying to speak the words that had been, for whatever reason, difficult for me to express in conversation.

Sometimes, I think men and boys feel as though they can’t talk openly about their feelings, so we talk around the "thing" we wish to say, or we don’t talk at all. And I suppose, one of the reasons I started writing poetry was because I felt inarticulate. In that way, the poems could speak for me. And really, it was after I had children when I began to think: I don’t want my kids not knowing what their dad thought or felt. I want them, when they are older, to have a map, to know I was (and still am) a "work in progress." I never want them—my son or my daughter—to be afraid of their own feelings. Poetry opens up that space.

As I was beginning to say, becoming a parent changed my entire outlook. Until I had children, I don't think I was nearly as reflective as I am now—in my poetry, or just in my daily existence. After having kids though—playing with them, caring for them, reading to them, witnessing their facial expressions, listening to what they say (and don't say)—I came to realize that even the slightest interaction, no matter how insignificant it may seem at the time, affects them. Every experience they have is a discovery.

So becoming a father got me circling back to my own childhood and the people who influenced me. I was very lucky to have nurturing and generous caregivers. But we are all human, so we are flawed and subject to human frailties. I try to be mindful of those complexities in my poetry. If anything, writing about the important people in my life has only made me appreciate them and their experiences more.

Meghan: These poems deal a lot with the intimate spaces of home—in regards to one’s original home and the one we create as adults. How do you approach writing poetry that is located in the familiar, physical spaces of the past and the present?

That's a great question! One of the dangers a writer faces when writing about the familiar is that you very often have to face those spaces (and those people) day in and day out. As a poet, fortunately I have the freedom to play with details in the world of a poem. What I try to honor most are the feelings associated with the experience. When I write about a childhood memory, or a loved one's presence in the home, or something that happened at the breakfast table two days ago, I don't want my thoughts or feelings to be separate from the text I am creating. I want the emotion that I am experiencing at that moment (or about that person) to leach from every corner of the text. To allow that to happen, I have to give myself permission to know that my feelings are momentary, and likely to change ten minutes later. If I didn't allow myself that "out," so to speak, the understanding that what I am writing at any given time is only a snapshot of a situation, and an incomplete one at that, I don't think I would be able to get up the nerve to write about things close to me at all.

Meghan: Which is the poem you feel closest to in this collection?

Robb: That is such a difficult question, though a great follow-up! As you know, every poem contains a part of the writer, so it’s almost like picking which part of yourself you like best.  There are poems I am almost certain to read at readings: “House Bird,” “The Bones,” “Superstition,” “For Snowflake,” “The Blue Hour.”  Like many of the poems in the collection, these are syllabics that unfold accretively and quietly and build in intensity, so they were all very much written in the same headspace. But if I had to pick just one from the bunch, I would say “Superstition.” To me, this poem represents a turning point in my career as a writer. “Superstition” was the first poem I wrote in which, upon its completion, I was 100% satisfied with the results. I wrote myself out of the idea suddenly and decisively. From the moment I placed the final punctuation mark, I knew that was the poem I was supposed to write that day—and it was at that moment that I started to gain confidence in my ability as a writer.

Meghan: House Bird looks closely at childhood, adolescence and adulthood, and the poems are woven thematically instead of ordered chronologically. How did you choose the poems for this collection and then choose the order—how did you make the choices you did to construct the narrative arc?

Robb: Another great question! I really admire poets who think in terms of an entire book manuscript. They seem to know intuitively what a collection needs, what's missing, the order of things. I haven't been able to do that. I write what I write-- which is a lot of individual poems. And it is only after some distance-- and looking back on what I have created-- that I can begin to see what I've done-- which themes I keep returning to, which voices tend to dominate, which subjects I can’t let go of.

House Bird had many iterations: it was four sections; it was five; it was organized chronologically; it was ordered according to the seasons. It took a lot of shuffling, and it wasn't until Diane Lockward (Terrapin Books publisher) made some excellent suggestions about re-ordering that I was able to see the collection's potential. Rather than create a straightforward narrative, we opted to abandon a linear "plot" or organizational formula and instead create a collage, or maybe several mini collages—a kind of mosaic of experience in which images, and words, and subtle through-lines reveal themselves gradually, building enough resonance to give the reader, by the end, a sense of a uniform whole.

I wanted House Bird to be an excavation of memory, to work the way the mind does, shadows coming and going, hazy outlines sending the reader backwards in time, the familiar drawing them back into the present.

as he pulled apart bits
of smoked whiting he bought
from the market downtown.

He sat in the kitchen
most of the afternoon,
working over headless

glistening flesh, picking
through the soft pink insides
without a knife or fork,

offering my brother
and me a horse-radished
peck now and then. We stood

by his side and waited,
listened to him humming
along with Merle Haggard

between long sips of beer.
He was always careful
with the giving, his hands

like a slow, warm current
feeding another. That
cold fish with its many

bones. Dad never let one
slip past. It was all smoke
and silver scales, the tang
of root wet in our mouths.

Robert Fillman is the author of the chapbook November Weather Spell (Main Street Rag, 2019). His poems have appeared in such journals as The Hollins Critic, Poetry East, Salamander, Sugar House Review, Spoon River Poetry Review, and Tar River Poetry. His criticism has been published by ISLE: Interdisciplinary Studies in Literature and the Environment, CLAJ: The College Language Association Journal, and elsewhere. He holds a Ph.D. in English from Lehigh University and teaches at Kutztown University. His debut full-length collection, House Bird, was published by Terrapin Books in 2022.
www.robertfillman.com

Meghan Sterling’s work has been nominated for 4 Pushcart Prizes in 2021 and has been published or is forthcoming in Rattle, Colorado Review, Idaho Review, Radar Poetry, The West Review, West Trestle Review, River Heron Review, SWIMM, Pinch Journal, and others. She is Associate Poetry Editor of the Maine Review. Her first full length collection These Few Seeds (Terrapin Books) came out in 2021. Her chapbook, Self Portrait with Ghosts of the Diaspora (Harbor Editions) will be out in 2023.
www.meghansterling.com