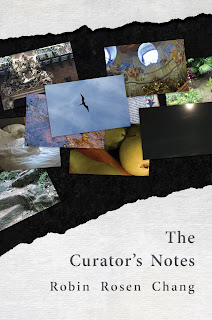 The following is the thirteenth in a series of brief interviews in which one Terrapin poet interviews another Terrapin poet, one whose book was affected by the Pandemic. The purpose of these interviews is to draw some attention to books which missed out on book launches and in-person readings. Diane LeBlanc talks with Robin Rosen Chang about the role of a prefatory poem, the use of myth in poetry, manuscript organization, and the function of form.

Diane LeBlanc: The first poem in The Curator’s Notes, “My Mother Was Water,” introduces some of the collection’s central motifs: water, a mother/daughter relationship, origin stories, exile, survival. It serves as a preface or frontispiece. I always wonder if poets choose a poem with great weight for that position in a book, or if a poem gathers force when situated alone before a series of sections. What can you tell us about that poem and about its place in the collection?

Robin Rosen Chang: “My Mother Was Water” was actually the working title of my collection. However, I felt that, as a title, it incorrectly implied that the collection was all about the mother figure. On the other hand, the poem works well as a prefatory poem because it introduces many of the book’s themes. Through this poem, the reader is presented with the importance of stories—origin stories, stories we inherit, stories we adapt, stories we ourselves curate—as well as the types of relationships that are prominent in The Curator’s Notes, namely those between mothers and daughters and between women and men. It also serves as a launching point for my own origin story, while foreshadowing some of the turbulence that ensues.

Diane: We just touched on origin stories. You begin the book with your origin story. Then, poems such as “Bleeding into the Garden,” “The Creation of Adam,” “Apple,” “The Snake,” and one of my favorites, “Motherless, Eve,” return to the Biblical creation myth to contemplate origins of human beings, paradise, sin, loss, grief, even stories themselves. What draws you to the Garden of Eden story in these poems?

Robin: I’m not sure what initially impelled me to write the Creation poems, but in retrospect, I’m sure I intuited there was something crucial about the figure of Eve. “Bleeding into the Garden” was the first one that I wrote, and in it and the other Creation poems, I begin to interrogate stories that have been handed down to us. For example, why should it be taken for granted that Eve was the first to be disobedient? Why would Eve and Adam be ashamed of being naked? It was exciting and liberating for me to be able to write poems that felt so different from my usual preoccupations, but also, interrogating those stories empowered me to think more critically about my own story. When I began to reflect on how the Eve poems related to the poems I had written about loss and about the speaker’s mother, I realized that Eve was literally motherless. That understanding prompted me to delve into what being motherless would really mean. Imagining Eve and Adam together also gave me a way to explore relationships between women and men.

Diane: Knowing that you had several poems in dialogue with the creation myth, how did you determine their placement in the book? I can never decide if I should group similar poems or weave them throughout a collection. The dispersed effect in The Curator’s Notes is powerful. The myth becomes increasingly integrated into the world of the book until the real and mythical, the ancient and the contemporary, are interchangeable in “After Eden.” What can you tell us about organizing the collection?

Robin: Organizing the collection was a challenge. The collection started as my thesis for my MFA from The Program for Writers at Warren Wilson College. I had always wanted the Creation series to be part of the thesis, but I didn’t know how to integrate them into the collection. My advisor, Rodney Jones, suggested that they could be interspersed and in conversation with the other poems. That’s when I started understanding the relationship between Eve and the speaker. Still, deciding where to place different poems was difficult because The Curator’s Notes has other threads related to nature, art, language, and Spain. I first experimented with placing the narrative poems in chronological order and strategically placing the lyric poems among them. When Diane Lockward began working with me to bring the book to fruition, she suggested I let go of chronology since this book deals with curating stories and also with memory. That opened up lots of options.

Diane: Let’s talk about form. Your poems vary in terms of the number and pattern of stanzas, line lengths, and alignment. That variation creates appealing use of negative space. I’m particularly interested in what I call the skinny couplets of “Futility,” “Ashamed,” and “Holding On.” The lines are two to three words long with a lot of white space to their right. Do you have an influential poet’s work in mind or does a certain kind of content inspire those spare lines? I’m curious how a poem’s appearance on the page influences your form and language choices.

Robin: William Carlos Williams is of course well known for some of his very spare poems like “The Red Wheelbarrow” or “This Is Just to Say.” Rae Armantrout, a contemporary Language poet, is also masterful with short lines. While Williams, Armantrout, and others use short lines in different ways, parceling information into small chunks and offering only the most essential bits, surrounded by white space, intensifies the impact of what is there. It pops and takes on more meaning, while what is not said is almost ghostlike and still felt.

The poems you mentioned—“Futility,” “Ashamed,” and “Holding On”— are among the most difficult poems I wrote because they intimately and directly deal with loss. They address a loss that is not mitigated by distance, but one that is immediate and acutely painful. In these three poems, the speaker’s mother is dying, and the speaker’s feelings are complex and raw. Because of this, the only way I could write these poems was by uttering what I felt I had to say. Thus, the content led to the form of these poems, while the form also acted upon the content. In this sense, these poems are very organic. I have to add that concise poems like these are incredibly difficult to write. Each word must be earned, and their placement on the page and every line break becomes crucial.

Diane: The poems in your collection raise timeless questions. In the book’s title poem, you recognize the tension between extinction and survival in species and in family. Since other poems explore the relationship between knowledge and responsibility, I’m wondering about “the curator’s” responsibility to the dying and the living. At what point in writing the poems in this book did you realize you were living with these questions?

Robin: You’re correct that a lot of the poems in The Curator’s Notes deal with survival, whether it is of individuals, families or entire species. This only became evident to me during the process of revising some poems with an eye to making the collection more cohesive. “Great Green Macaw,” the final poem in the second section, is one I had always been fond of, but I could never find the proper closure for it. While revising that poem, the line “[t]ell me how you survive/this perishing world” came to me. That’s when it became clear to me that survival is the underlying subject of this book. But also, recognizing beauty and love, even when it appears in unusual places and unrecognizable forms, and curating one’s own story are essential for being able to live in this world.


Sample Poem from The Curator's Notes:

In amber, the thin, articulated vertebrae of a Coelurosaur,
feathered landlubber, festooned with thousands of wispy fluffs
resembling leaves—rachis with pinnules, chestnut-color on
top, colorless on the bottom—probable cousin of the “chicken
from hell.” Neither destined to endure—

Like the rodent, Bramble Cay Melomys, recently extinct. Or
the Darwin Fox, numbers dwindling as earth, once recovered,
gets increasingly inhospitable. Our generations will also
shrink. The Formicidae will prosper, a most dubious hero—

The ant. One glows in the amber resin. Its multi-chambered
spine—head, thorax, bloated abdomen. Six legs, each bends
in three places—eighteen joints that motored him through ferns
and conifers, under lumbering big-headed dinosaurs and
tiny-brained armored grass grazers, between the legs of
cockroaches. The species marched 100 million years to the
other side of the K-T mass extinction, dropping small white
eggs on its way, colonizing almost every landmass. Survivors.
At any moment, 10 quadrillion walk the planet—

And in her bed, my mother. Her bowed back, its protruding
spinous process, like a nautilus’ chambers, spirals inward
toward oblivion. The archivist, I note the world disappearing
before my still-good eyes, and wish I could change nature’s
course—uncurl her.

Robin Rosen Chang is the author of the full-length poetry collection, The Curator’s Notes (Terrapin Books, 2021). Her poems appear in Michigan Quarterly Review, The Journal, Diode, Verse Daily, Poet Lore, Valparaiso Poetry Review, Cortland Review, and other journals. They have also been included in Terrapin Books’ A Constellation of Kisses and The Strategic Poet. She is the recipient of the Oregon Poetry Association’s Fall 2018 Poets’ Choice Award, an honorable mention for Spoon River Poetry Review’s 2019 Editors’ Prize, and a 2020 and 2021 Pushcart nominee. She has an MFA from the Program for Writers at Warren Wilson College.
www.robinrosenchang.com

Diane LeBlanc is a writer, teacher, and book artist with roots in Vermont, Wyoming, and Minnesota. Her books include The Feast Delayed (Terrapin Books 2021) and four poetry chapbooks. Her poems and essays appear in Bellingham Review, Cimarron Review, Green Mountains Review, Mid-American Review, Sweet, and other journals. Diane is a certified holistic life coach with emphasis in creative practice. She directs the writing program and teaches at St. Olaf College in Northfield, Minnesota.
www.dianeleblancwriter.com