The Poet on the Poem: Deborah Bogen

I've often admired Deborah Bogen's poems in journals. I was delighted when I learned that she had a new book out and also delighted when she agreed to be this month's poet for The Poet on the Poem. 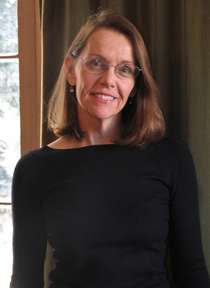 Deborah Bogen's poems and reviews appear widely in journals including Shenandoah, The Gettysburg Review, The Georgia Review, Margie, Poetry International, and Field. Her work has been featured on Poetry Daily and Verse Daily. Her full-length collection, Landscape with Silos, won the 2005 X.J. Kennedy Poetry Prize (judged by Betty Adcock) and was released by Texas Review Press in August 2006. Her new book, Let Me Open You a Swan, won the 2009 Antivenom Prize from Elixir Press. She's a former California girl, now living in Pittsburgh where she runs free writing workshops in her home.

Today's poem comes from Let Me Open You a Swan. 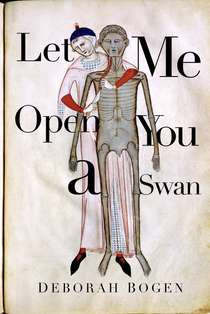 The Rudest Gesture is the Phone That Rings in the Night

Grant to my brother
that he come here unharmed.
Grant safe passage, that he arrive whole

Grant him a moment's ease when the song spinning
in his skull is released,
when his throat softens and opens,

and although I am neither the honey nor the bee,
I ask that you grant me this:
. . . . . a dispelling of smoke for my brother
who has been homeward bound
for years.

Grant that he come, penniless or resurrected.
Raise before my face his scarred
and ink~stained palm.


DL: Your poem strikes me as a prayer for a brother’s return and resurrection. Tell us about the nature of the resurrection and your use of implied biblical allusions.

DEB: I had a stepbrother who I met for the first time when I was 15 and he was 11. Despite our ages we were almost immediately bonded as siblings – we were that kind of personality match, I guess. We were close and we always knew the hour of our first meeting.

When I was writing this poem, he was dying of complications of Hepatitis C. He had been on the liver transplant list for some time, and I found out later was denied a new liver because he had continued to drink. I was sad, but I actually understood the transplant committee’s decision. Anyone who keeps drinking with a failing liver does not actually want the transplant. My brother didn’t. That was a hard pill to swallow. I wanted him to stay with me on this planet, to be “resurrected” with a new liver but he had been sick a long time. He wanted to let go.

The biblical allusion falls out of the Christian claim of Jesus’ resurrection, of course, but the idea of coming back, of some sort of rebirth precedes Christianity. I was raised in a Christian Church and the part of that I loved was the exposure to the King James version of the Bible. A lot of that language is gorgeous — spell-binding you might say. When I found myself falling out of the religious life, when I was unable to take a great deal of it seriously, I still loved the language and I simply refuse to give it up.

DL: Your title seemingly has no connection to the poem, yet I feel it powerfully. Was there ever a point in your drafting when a phone was in the poem, when its ringing disturbed the night?

DEB: Every Monday night I write with a group of poets and fiction writers in a workshop in my living room. We all write together to a prompt and then read that work out loud. I run the group and sit by the phone. It is my job to remember to turn it off. But the phone itself is right there and in my mind as a potential disturbance. One night the prompt included something about “gesture” – to use gesture in the writing, perhaps to define or develop a character, I can’t quite remember. In any case I found myself writing “The rudest gesture is the phone that rings in the night.” The possible implications are obvious, but I found that the phrase itself kept coming back to me. It took months to realize it was related to my fears for my brother, to my desire to not get the call I knew had to be coming.

DL: I’m interested in your use of anaphora to structure the poem. “Grant” begins four lines and is embedded in two additional lines. The repetition adds rhythm and a tone that is both demanding and begging. Talk a bit about the craft decision that went into the use of this deceptively simple device.

DEB: It might be fair to say there was a decision to let that language stay in, and even overtake, the poem, but it came on its own in the first draft when I was writing freehand with a pen in a notebook. You are quite right to call out the demand and the begging which I think are part of our most desperate hours, when we are half imploring and half stamping our feet as if some kind of tantrum might turn the tide. I was worried about it sounding too Christian, too prayerful, but I used the repetition to invoke the casting of a spell. Can I cast that spell? Can I hypnotize the universe into supporting my project? Probably not but that impulse has fueled magic and religion for a long time. It is a deeply human to wish to do it, I think.

I also used it to allow a heart heavy outpouring, a saying and re-saying. It was meant to allow a river of feeling to flow without apology or justification. When we have to let go of a loved one, all our usual attempts to appear rational and grownup, even artful, seem ineffectual. We are the child again wanting it please, please, please.

DL: The poem has beautiful and intriguing images. Tell us about “his scarred/and ink-stained palms” and the final stanza’s “that river music flow.”

DEB: I was surprised to find myself using “palms” but at some level I wanted to invoke a resurrection again, that late in the game when I should have been able to just let him go. Jesus’ palms were scarred by his crucifixion in all the images from my childhood. I also wanted the palm raised up before my face, as in a goodbye gesture, a gesture that might soften the jangling of the phone with the bad news and give us one last moment of communication and understanding. One thing my brother and I both did was write songs so the ink was right there. He was a guitar player and somehow I always found those chords, his music, a wonderful wave, a flow of sound. Riverlike.

DL: The poem invites an oral reading, but I hear its music in my head. How much attention did you pay to the music? How did you achieve it?

DEB: You notice all the things a poet hopes will work. The music in the poem hopes to claim the music in prayers, in rituals, in spells. As I worked on it, I spent a lot of time saying it aloud, and revising. That kind of sound rehearsal is something you cannot do enough of, and I am always sorry when I read something in public that seemed quite good on paper and hear something that lets me know I sent it out before I had done all the work. It hurt to read this out loud, over and over, of course. I kept finding myself reaching for the Kleenex box and trying to stifle the tears as I worked. When I could read it while I was alone without being overtaken by emotion, I read it to my husband, and found myself struggling again. When the words move through the body, we find things out.

You didn’t ask this, but I want to say that not too long before my brother died we got to spend a day singing, playing guitar, being our best selves together. He was tired and I knew I should go, but we played on because we both knew we were singing together for the last time. We were privileged to know the hour of our last parting and to say the goodbye my poem seeks. It doesn’t fix everything or avoid pain, but it is a worthwhile thing to do. I hope that someday in our society we will be able to look death more squarely in the face so we can have our goodbyes in a setting that honors the lives we seek to lead and the loved ones we are lucky to have known. It’s a hard thing to do. But then, most good things are.

Posted by Diane Lockward at 1:50 PM

Email ThisBlogThis!Share to TwitterShare to FacebookShare to Pinterest
Labels: deb bogen, let me open you a swan, Poet on the Poem, poetry