Don Sheehan and The Frost Place

When I began writing poetry, the second summer conference I attended was at The Frost Place in Franconia, New Hampshire. I returned for the next 7 summers and then moved on to the Seminar there. I attended other conferences, other workshops, but The Frost Place always held a special place in my heart. I don't think I'd be too corny if I said that it has been one of the most significant influences on my life and who I am. From the first time I stepped foot on the grounds, I knew I was in a special place. I was greeted by a man with a long flowing white beard. That was Don Sheehan, the director. Don was the soul of the place. Everything good there flowed out from him. So I was so sorry to learn of his death this week. He died, age 70, at home in South Carolina on Wednesday morning, May 26.

David Graham posted a lovely tribute to Don on Facebook. With his permission I am reposting it here. I think it will give you a sense of just how special Don was. And will continue to be. 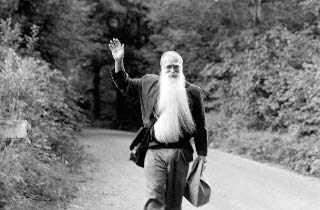 I was very sorry to learn yesterday about the death of Donald Sheehan, founding director of The Frost Place in Franconia, NH. For over a quarter of a century Don ran the programs at The Frost Place, including the Frost Festival, the Frost Museum, and the Poet in Residence program. Not a poet himself, Don was a legendary teacher and scholar of English, Russian, and classical literature. He was immensely knowledgeable about and supportive of the art of poetry.

Even more importantly, he set the tone of the Frost Place and its programs: non-hierarchical, community-minded, informal but serious and rejuvenating. At the Frost Festival each summer Don usually made a short speech in the beginning asking everyone to agree NOT to make any life-altering decisions for at least six months after the week in Franconia ended. He emphasized that the Festival was a special place and time, and was not "real life." I gather that he felt obliged to make such a disclaimer because so many participants went right home afterward and quit their jobs, initiated divorces, and so forth.

There was virtually no Po-Biz at The Frost, and any celebrity poets who put on airs or otherwise did not enter into the spirit of the place were not asked back. Everyone who ever went there came away realizing that Don was as responsible for its special quality as anyone. As Donald Hall put it, The Frost Place has always been dedicated not to poets but to poetry. Don Sheehan was a quiet, deeply religious and humble man, so it's hard to describe what a magnetic personality he had. As Sydney Lea remarks, "when Don entered the room, the atmosphere calmed and people began to behave better."

I first attended the Frost Festival as a student in 1980, and returned a number of times over the years as a faculty member in various programs, or just to visit the place and friends who were there. One of the highlights of my life was being asked, in 1996, to live in Robert Frost's farmhouse for the summer as a Resident Poet. I got to walk Frost's woods, sit in his writing chair, enjoy the amazing White Mountains scenery, and soak up the atmosphere where he wrote some of his best early lyrics. But by far the best part of the summer was coming to know Don and observing at first hand how he directed the place and its programs. My teaching and my poetry were forever changed as a consequence.

I have always loved what Don would say every summer when introducing the workshop at the Festival, which I'll take the liberty of quoting below; it seems to me to have a lot to do not only with the art of poetry, but with teaching and living one's life in a healthy way. I am sorry that I can't discover where I found the text of his remarks originally--

"The heart of the conference is the workshop. Thus, you will need to work from the heart. There is a natural urge to hide: a swarm of anxieties, both our own and others' that we pick up on. Above all, there is an overwhelming 'need'--a false hunger--to be praised, coupled with a hair-trigger impulse to envy anyone else whose work seems immediately praiseworthy. Thus you are likely to find yourself whipsawed between the hunger to be admired and the impulse to envy those who are admirable.

You will need to recognize and acknowledge all of this--in order to reach the key that unlocks all truth: taking very great and very deliberate care with each other.

This taking-care, which is a form of love, increases the quality of the intelligence. If you must make a flash choice between sympathy and intelligence, choose sympathy. Usually these fall apart--sympathy becoming a mindless 'being nice' to everyone, while intelligence becomes an exercise in contempt. But here's the great fact of this Festival, for twenty-seven years now: as you come deliberately to care about another person's art (and not your own), then your own art mysteriously gets better.

Thus, your work at this conference is to make the art of at least one other person better and stronger by giving--in love--all your art to them."

The official obituary from the website of The Frost Place can be read here.

Posted by Diane Lockward at 8:31 AM