The Poet on the Poem: Patricia Fargnoli

I first met Patricia Fargnoli online at the Wompo listserve. Later, I met her in person when she was resident faculty at The Frost Place. She is a wonderful poet and teacher of poetry. Poet Laureate of New Hampshire from 2006-2009, she is the author of six collections of poetry, including two chapbooks. Her first book, Necessary Light (Utah State University Press, 1999) was awarded the 1999 May Swenson Poetry Award judged by Mary Oliver. Her most recent book is Then, Something (Tupelo Press, 2009). 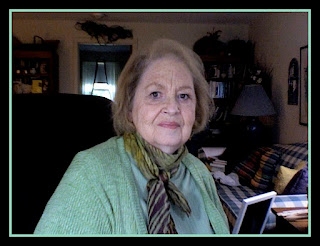 I found today's poem in the current issue of Poet Lore, one of my favorite journals. I was reading the journal recently in New Hampshire to give a reading. When I came across Pat's poem, I knew I wanted to invite her to discuss it here. Then as Fate would have, who should show up at my reading later that day? Pat! So I immediately lassoed her. By the way, Pat is the kind of poet who shows up at other poets' readings. She is truly a model of how we should support each other.

Will the Cows Come Home?

When the river freezes over and the pot boils
When the cat leaves the corner, when the tulips leave the bed

Where the village is sleeping, the cows will come to the barn
Swishing their long tails, nodding their heads

If you have been waiting too long, the cows will come for you
If you believe in cows, they will come to your hand

If you hold out sweet grass in late afternoon's last hour
From the greener pastures, they will surely come to you

When you say the right sounds, they will hear you
When your house is made of glass and stones, they will see you

When what has gone around must come around,
They will come home

Be careful what you wish for; if something can go wrong it will
But where there's a will there's a way

Go with the flow of the river. The cows will come home
After your actions have spoken louder than words

The cows will come home

All things come to those who wait
Cometh the hour, cometh the cows

Better late than never, everything in its own good time
The cows will come home

To your barn shaking their bells
They will come home to you.


DL:  What led you to choose cows as a topic for a poem? As the poem progresses, they seem to become more than merely cows. Was that your intention?

PF:  I had just been to buy raw milk from a local dairy farm (as I often do), where I'd stood at the fence talking to the Holsteins and loving their broad innocent faces. So I thought why not write another cow poem (I've written a few). And the phrase "when will the cows come home” came into my head. But I haven't a clue where the idea came from to answer the question by playing with sayings. The muse was on the job that day, I guess. But the next thing I did was, with the help of Google, make a long list of popular sayings. Then (and when I had the rhythm) the poem almost wrote itself. Which, I might say, is much different than my usual “struggle over months or years” process.

And yes, of course, the “cows” become more than merely cows…though I don't know that I realized that at first. They are, perhaps, whatever we wait for. Though I don't know if that's it exactly either. One of the early lessons I learned when I was learning to write was this: If one writes exactly enough about a specific thing/object/image/event, sometimes it gathers a deeper meaning (or another level of meaning) beyond that exact description. I think that is true in this case.

DL:  You violate one of the first rules taught to novice poets: Avoid clichés. Instead, you embrace them—and to great advantage. What made you decide to take this risk and what do you think makes it work?

PF:  I wasn't thinking of these as “clichés” exactly but mostly as sayings: aphorisms, platitudes, proverbs that have been around for a long time and which have been used as “lessons” for humans about life. What's changed here, of course, is that I've made them apply to cows—a shift in perspective. Anyway, I love breaking “rules” in poems and getting away with it (the latter part of that sentence, the important part). An early poetry teacher, Brendan Galvin, taught me that “what works” is the only final rule.

DL:  Your use of anaphora adds music, structure, and meaning. How hard did you work on that technique? Also, the refrain, “The cows will come home,” or a slight variation, adds such power to the poem. How conscious was this?

PF:  It was very conscious. I read somewhere that Stanley Kunitz once said that when he had the rhythm of a beginning poem in his head, the poem could be written. Well, I may be remembering that wrong, but he said something like that and it struck me as being true.

And the refrain and anaphora keep the poem focused and glued together. The repetition builds power as it goes, I think.

DL:  In the third to last stanza, you say, “Cometh the hour; cometh the cows.” That change in diction immediately grabbed my attention. But why “cometh”?

PF:  The saying I was playing with and paralleling here is “Cometh the hour; cometh the man.” This is my favorite line, precisely because of the surprise of the change in diction—and because of its rhythm.

DL:  a) Tell us why there's no punctuation at line ends.

PF:  There's no end punctuation at all except for the final period. That just seemed intuitively right to keep the flow going. I let capital letters and line and stanza breaks substitute for punctuation.

DL:  b) Tell us why each line begins with the formality of a capital letter.

PF:  Because I felt that each line was almost an end-stopped sentence—or at least a sentence fragment and I wanted them to be read that way. Again, this was intuitive and seemed right.

Posted by Diane Lockward at 3:41 PM

Email ThisBlogThis!Share to TwitterShare to FacebookShare to Pinterest
Labels: patricia fargnoli, Poet on the Poem, then something, will the cows come home?