Give the Gift of Poetry 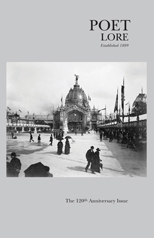 I have an early gift-giving suggestion for you: A subscription to the print journal, Poet Lore. At 125 years old, Poet Lore is the oldest literary journal in this country. It is also one of the best, turning out outstanding poetry in issue after issue. I've been a subscriber for years. Other journals I subscribe to I sometimes drop for a while and move onto other journals, perhaps later returning. I wouldn't consider dropping Poet Lore, not even for one issue.

Here are some reasons why you should treat yourself and the people you love to a subscription:
1. A subscription is only $10. Really, what other gift of such value can you get for that price? That price, however, is going up on January 1, so act now. Do not procrastinate.

2. The journal comes out twice a year, spring and fall. There's enough in each journal to keep you happy for many hours, yet not so much that you feel overwhelmed by the size of the issue.

3. This is one of the few print journals that is exclusively poetry. You're not going to have to flip through the short stories and essays to get to the poems. It's all poems. I have nothing against prose, but I love having this one journal that's such a feast of poetry.

4. The selection of poems is eclectic. If you like well-written poems in a variety of styles, poems that tell stories, poems that touch the heart, poems that take some risks while not sacrificing clarity, then this is your journal.

5. Each journal is organized in much the same way that a poetry book is, i.e., with the poems strategically placed rather than in alphabetical order or according to some other arbitrary plan. This means a big investment of time and brain power on the editors' part, but provides enormous pleasure for the reader. Each issue is like a quilt, each poem fitting in just the right place and adding to the overall design.

6. The back section of each issue contains a generous number of reviews of recent poetry collections.

So what are you waiting for? Hop on over to Poet Lore and place your order.
Posted by Diane Lockward at 1:18 PM