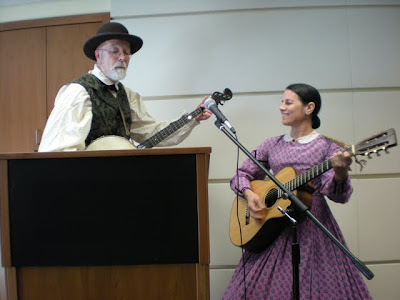 This past Sunday I participated in a tribute to Abraham Lincoln in honor of his bicentennial. The event was held at my local library with the support of a grant from the NJ Council for the Humanities. It was a surprisingly wonderful program. It began with a brief lecture about Lincoln's life and presidency. This was delivered by Dr. Larry Greene, history professor at Seton Hall University. Then various dignitaries—a congressman, assemblymen, local mayor, school superintendent—read Lincoln's speeches. Other people read poems about Lincoln. I was asked to read Edwin Markham's "Lincoln, The Man of the People" and an excerpt from Bayard Taylor's "The Gettysburg Ode."

Also included were two musicians, Chuck Winch and Lisa Godino, known as Plum Run. They were dressed in authentic clothing from the period and sang a number of Civil War songs. My favorite song was "The Vacant Chair," about a boy killed in the war. His family anticipates the first Thanksgiving dinner without him: "We will meet, / but we shall miss him. / There will be one vacant chair." I found a wonderful video of the song:


After a local councilman read the poem, "Three Hundred Thousand More," Lisa addressed him and told him how touched she'd been by the poem. Boys and young men going off to war is a topic she often writes about. As she spoke, she began to cry. I think she did not know that the man to whom she was speaking had lost his son this year, in the war against cancer. For those of us who did know, her tears were all the more poignant.

Lisa got herself together and was able to sing her song, "Chaplain," about a boy going to war and wondering what will happen to him and what he will have to do to others and where will he go if he dies. I could not stop thinking about how relevant the speeches, the poems, and the songs are to our lives today as young men continue to go off to battle. Here's Lisa singing the song which she wrote:

Posted by Diane Lockward at 2:00 PM