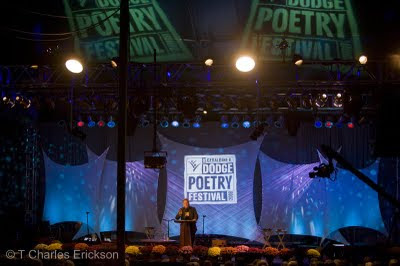 The Star-Ledger, New Jersey's largest newspaper, announced this week that the Dodge Foundation has selected Newark as the location for the 2010 Geraldine R. Dodge Poetry Festival. It had been previously announced that the 2010 festival would not take place due to serious funding issues with the Foundation. Also, Waterloo Village, the site of past festivals, was no longer available. Of course, the loss of the festival was met with great dismay. People wanted it back. People began to think of alternatives, other ways of funding, other locations.

Montclair suggested forming a partnership with Dodge. They offered funding and their town with its close proximity to NY and transportation and hotels, with its cultural history, its museum, its university campus. The idea appealed and Dodge began to consider the possibility. Then they invited other towns and cities to offer themselves as possible locations. Several did.

Recently the contenders were narrowed down to Montclair, Newark, and Trenton. Now Montclair has been thanked for providing the original idea, but the prize goes to Newark. Mayor Cory Booker is happy. The Star-Ledger quotes him as saying, "Newark is the state’s center of arts and culture and entertainment and having the festival in Newark is a testament to its spirit."

Newark once was a great city. I used to go there all the time when I was a kid. All the big department stores were there. I loved Newark and felt safe there. But in recent years Newark has been known as the car theft capital of NJ. And don't I know it. A few years ago, when I was poet-in-residence at a charter school, my car was stolen in broad daylight right off a main street. It was located later that day, abaondoned and left still running in Irvington. It had extensive damage, thanks to the thief having driven from Newark to Irvington in first gear. I was without that car for six weeks and out many dollars for the repair and car rental.

But I like Cory Booker and I hope he can restore Newark to what it once was. And why not? There's a fabulous library system, several museums, remarkable architecture. Just clean up the crime. I know the Mayor is trying to do that. Let's hope that poetry can help. I believe it has the power to work miracles.

This past week Newark has also received some attention from late-night talk show host, Conan O'Brien, who mocked the city! Booker immediately took to the airways and posted a video to YouTube. It only made me like him more. Take a look:


Just too bad he didn't add something about Newark also now having the Dodge Poetry Festival.

At the end of his video, Conan mentions that part of Newark Airport, from which Booker bans him, is actually in Elizabeth. Oh dear. I once had a car stolen in Elizabeth.

But I remain undaunted and will definitely be in Newark for the 2010 Dodge Poetry Festival. I will miss Waterloo with its bucolic setting, but it will be interesting to see how the festival works in a city setting.

Posted by Diane Lockward at 9:27 AM