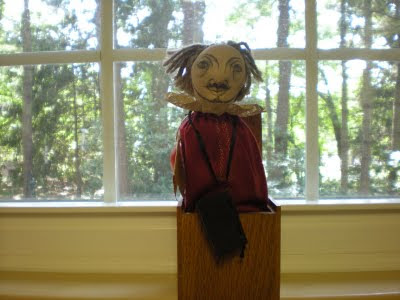 Shakepeare is watching you. Be careful.
On Wednesday of this week I read Shakespeare's Sonnet 71 as part of the Our Daily Sonnet project. I saw this project highlighted a few months ago at Line Break. I checked it out and thought it would fit right in with my current project of becoming more audio/video savvy. I contacted Adam Tessier, the creator of the project, and offered to record Sonnet 29. Of all 154 sonnets, that was the only one that had been spoken for. Not to be discouraged, I then proposed sonnet 30. I got the green light on that one and proceeded to make my movie.

On the day of my debut, I discovered that someone named Bob had also sent in a video of the same sonnet. And he'd sent not one but two versions of the sonnet. When I pouted a bit—already a prima donna—Adam invited me to do another movie. I proposed yet another sonnet, but it turned out that someone else had already spoken for that one and planned to swallow a sword during his reading. I then proposed Sonnet 71.

Adam's project is to get a video of all 154 sonnets and to post them at the website. Three cheers for Adam for making Shakespeare cool and fun. Some of the videos have been recorded in coffee shops, some on street corners, some in beds, some in office chairs. One gets the feeling that some of the readers were simply accosted with a book of sonnets and told to read! These are casual efforts minus costumes, at least for the most part. People have been caught during cigarette breaks, while awakening, while walking down the street.

I love the idea of Shakespeare popping up in all these random places. And as a former high school English teacher, I thought immediately of the possibilities for incorporating a similar project into a course of study.

I made my video with my new computer. As you can see, I was assisted by the Bard himself. How about some of you offering to make a video of another sonnet? There are plenty left. The contact information is at the site on the About page.

Posted by Diane Lockward at 6:34 PM