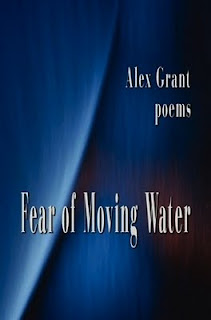 I'm sure I would praise this collection even if it hadn't been published by my own publisher, Wind Publications. But I'm glad that it was published by my publisher as I'm enormously proud to share shelf space with this poet. This is a sophisticated collection, all the more impressively so when we consider that this is Grant's first full-length collection. Perhaps, though, the level of sophistication and the beauty of Fear of Moving Water should come as no surprise as Grant is well-published and has had two award-winning chapbooks as well as numerous other awards.
The collection consists of 39 poems divided into four sections, each preceded by a prose poem which serves as a prologue. There's not an ounce of fat in the collection, not one poem that I wish had been removed, not one space where something seems to be missing. This quality of tightness is also found in the poems.

There is much to admire here. First, there's an appealing range of subject matter. Clearly, Grant is attracted to the animal world. We find the poems populated with turtles, beavers, a mouse, an old dog, a cuckoo. Even the small ugly things of this earth merit his attention—the cockroach, the garden midge, the spider. Grant is also drawn to other forms of art. There are poems based on photos and paintings as well as poems about artists such as Van Gogh, actress Lillian Gish, haiku master Issa. The collection is subtly sprinkled with literary allusions to such people as Neruda, Sartre, and Simone de Beauvoir. Several poems reveal a fondness for the culinary arts, for example, "Hamish Samey's Turnip Soup."

Then there's the pure poetry of these poems. Here's a poet who luxuriates in language, who has a talent for the odd word, the just-right word, and an ear for the music of the words. Listen to the lovely ell-sounds in "Black Moon": ". . . the dry doggerel / of mackerel scales and filament // of a season ended, to the water. / The sand flays the last flakes / of paint from the boat's hull . . ." Note, too, the a-sounds. Here's another example of Grant's diction and musicality, this one from "Fuel": "We spend the morning burning / oleander brush. Shards of sunlight / slash the canopy, cleave pathways // through pungent smoke-shrouds, // fuel clumps of emerald sphagnum."

Grant's mastery of craft is also seen in his use of imagery and figurative language. Note the sensory appeal in this triple simile from "Neruda's Suicide Note": ". . . you cover / your face with your hand, / and it sticks to your skin / like confetti, like phosphorus / launched from a Greek warship, / like the skin of a plum / peeled by a broken nail." While most of the poems are, like this one, written in free verse, there is a formal elegance to them. And Grant makes a nod to formalism in the collection's five sonnets, a villanelle, and a solo renga.

Here are two poems from the collection which represent it nicely and which should whet your appetite for the entire collection.


And here's one that's as frightening as it is lovely.

Posted by Diane Lockward at 6:50 PM