My Poem Goes to Portugal

Several months ago I was contacted by Francisco Craveiro, a mathematics professor from the University of Coimbra in Portugal. It turned out that in addition to things mathematical he also enjoys poetry and translation. He especially likes poems with math-related subject matter. From time to time he gathers such poems together, translates, and compiles them in a chapbook which he reproduces and distributes. He had come across my poem, "The Mathematics of Your Leaving," from my first book, Eve's Red Dress. I don't know where he found the poem, but it first appeared in Rattle. Now while Rattle is a print journal the editor had also posted the poem on the journal's website, so perhaps that's where Francisco found it.

A few days ago I received a copy of the chapbook. Eight poets are included. There I am right after Charles Simic! I have no knowledge whatsoever of Portuguese, but it's a kick to have my poem translated into that language. I love how poems make their way around the world and end up in unexpected places.

And here's the original poem in English:

THE MATHEMATICS OF YOUR LEAVING

Today I remembered my algebra book
flying across the room,
my father shouting I was stupid,
a dumb girl, because I couldn’t do math–
and all because you are leaving,
I’m calculating numbers,
totaling years, even
working out equations:
If x + 1 = 2, what is the value of x alone?
All day I’ve been thinking about
word problems: If a train travels west
at the speed of 60 miles per hour
against a thirty mile per hour wind, how fast
will you be gone?
Today I’ve added and subtracted,
multiplied and divided. I’ve mastered
fractions. Even that theorem
I could never understand–plus 1
plus minus 1 equals zero–is perfectly clear.
Then just when I think I’ve finally
caught on, a whiz kid now, a regular
Einstein, suddenly the numbers
betray me. No matter how many times
I count the beads on the abacus, work it out
on the calculator, everything comes
to nothing.
Mute and fractured, a dumb girl again,
I sit alone at my desk, staring
out the window, homework
incomplete. A square root unrooted,
I contemplate infinity.
–from Rattle #11, Summer 1999

And now here it is in translation: 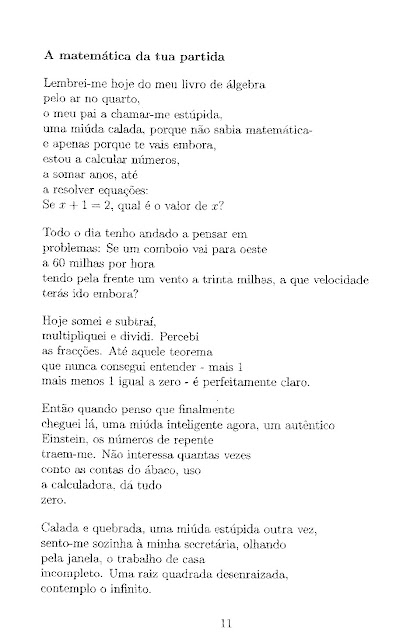 Posted by Diane Lockward at 3:58 PM