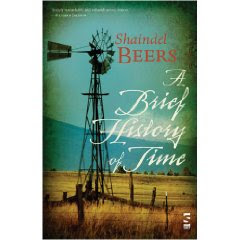 A few months ago I was invited to participate in a "blog tour" with poet Shaindel Beers whose first collection, A Brief History of Time, was about to be published by Salt Publishing. Since I'm interested in new ways that poets can promote their books and especially interested in ways the internet can be put to use, I quickly agreed. The publisher then sent me a complimentary copy of the book. My task was to read the book and prepare 3-4 interview questions for the poet.

The tour consists of a total of thirteen stops at a wide variety of blogs. I'm Shaindel's fifth stop on her journey through cyberspace. Check out the complete schedule here. What a great way to bring the book to the attention of a whole new audience scattered across the country.

It was a pleasure to read Shaindel's book and to participate in her tour. It's also my pleasure to recommend the book to you. (Click the above cover image to get to Amazon.) And now the interview.

Diane: What made you choose "A Brief History of Time" as your title poem? What made you decide to place that poem first in the collection?

Shaindel: To be honest, my publisher made “A Brief History of Time” the title poem. Titles are hard for me. I went through two different working titles during the few years I was sending this collection out to publishers before Salt picked this book up and titled it for me. The first title (which is so embarrassing I won’t even admit what it was here) was a phrase from a poem in the collection, and, at the time, it seemed like a good enough title because I couldn’t come up with anything better. One of the years I sent the collection to Tupelo Press’s Dorset Prize competition, I got a personalized rejection from Jeffrey Levine (which, in itself, was an honor), and one of the suggestions he gave me was to choose “a more evocative title” so that my collection would get more attention. From there, I changed the working title to Last Train from the City, which, I think, has a nice ring to it and is metaphorically fitting, but if you ask anyone to name their favorite poem from the collection, that probably wouldn’t be it. I mean, I wrote the poem, it made the cut into the collection, and I like it, but it’s definitely a lesser poem than “A Brief History of Time.”

I think “A Brief History of Time” is probably the strongest poem I’ve ever written. It was definitely my first long, ambitious poem, and I feel like it’s all-encompassing—or at least tries to be. So it’s an appropriate beginning for a book, especially my first book. It’s a grand entrance into the world of poetry for me, whereas the first working title I had for a book would have been like tripping into the foyer of a fancy party, and the second title would have been like showing up in business casual for a black tie event.

Diane: I noticed several sports metaphors. For example, "A Brief History of Time" ends with these lines: "That same moon I liked to picture as a baseball, years earlier, / a baseball hit so hard and far that nothing could ever bring it back." Tell us about your attraction to sports as a source for images and figures.

Shaindel: That’s interesting. The reference you mentioned, I would have thought of off of the top of my head, but I actually had to go back and look at my own poetry collection to find the other sports metaphors. It looks like baseball dominates the sports metaphors, and baseball was pretty much my religion, growing up. I really thought at one time that if I practiced hard enough, I would be the first woman to play Major League Baseball. And we’re talking when I was really young—like nine or ten. I loved being the girl on my street who could hit the ball out of the yard every time. It impressed boys more than anything else I knew how to do, and I think it scared them a little. Home runs are something amazing. On the one hand, it shows immense strength, but then, it sort of lets you off the hook; you don’t have to hustle around the bases if you’ve knocked it out of the park. There’s something romantic about that lazy kind of power.

I think in the case of baseball, which I still see as the American pastime, it’s a useful tool for metaphor because it’s common enough everyone will know what you’re talking about; it’s a form of shorthand. I had a discussion about this with Wayne Miller when I was interviewing him about his translation of Moikom Zeqo’s collection, I Don’t Believe in Ghosts. There’s a portion in one of the poems that goes, “I want to kick the planet like a soccer ball / into the open goal of the future.” In Albania, where Zeqo is writing, soccer is the national sport, so it would be the same type of shorthand baseball is here. That is one of Zeqo’s younger poems; he was about twenty-three when he wrote it, and Miller was about the same age when he translated it. I think there’s a youthfulness about the sports metaphors that adds energy.

As far as the gym and kickboxing mentioned in “A Study in Weights and Measures,” I worked part-time as a fitness instructor when I was writing that poem, and I still work Saturdays as a fitness instructor. My minor is in dance, and I feel like I should do something to use all of those anatomy and kinesiology lessons from college, and I get a free gym membership for working four hours a week. Part of me is tempted to go on about the balance of mind, body, and spirit, which I truly believe in, but the other part of me knows that I’m not very disciplined, and being employed by a fitness center is one way I know to make sure I’ll work out.

Diane: One of the virtues of your collection is its variety, not simply in subject matter but also in forms. You alternate free verse with formal poems such as the sonnet, villanelle, sestina, and ghazal. You have poems with very long lines and ones with short lines. You have poems in a single stanza, others in multiple stanzas, and others in sections. How consciously do you strive for variety when you are writing? And did you consciously strive for variety when selecting the poems for the collection and when organizing them?

Shaindel: First of all, thank you. This is my first collection, and one of the beauties of that is that most of these poems were written during my MFA program, so I was trying a lot of things, and I had four different graduate advisors—one each semester—and each one was a different type of influence on me, and I was constantly trying everything they told me to try. (I’m one of those spaniel-like students who will do anything a teacher asks.) So, I tried all kinds of form poems and different line lengths and experimentation with line breaks, and I read widely as far as poems and poets and literary theory.

I really don’t think I consciously strive for variety. I think it’s a part of my personality. During my first years teaching college, I had a radically different hair color each semester. I do remember that when I turned in a list of books to my advisor that I wanted to study during a particular semester, I had a number of books by one very well-respected poet, and my advisor said, “You don’t need to read four books by her; she’s been writing the same book over and over since the 1970s.” I do know I don’t want anyone to say that about me. When selecting poems for the collection, I pretty much picked what I (and my final graduate advisor and post-graduate advisor) thought was good enough to make the cut. I organized them into what I felt was a narrative (and largely chronological) arc. I think it’s mostly my good fortune that the variety worked out the way it did. But I do hope always to be growing as a writer. 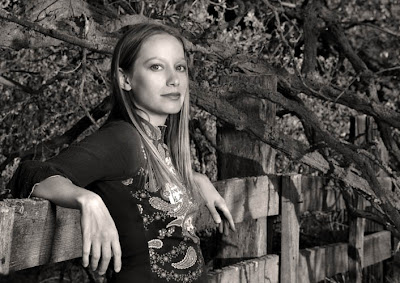