A Nice Knock at My Door 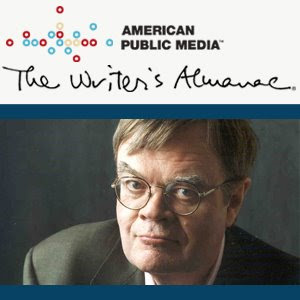 Much to my great delight, Garrison Keillor is featuring another poem of mine on The Writer's Almanac. The poem, After the Ice Storm My Son Does Not Come Home, is from my book, What Feeds Us.

I am again reminded how much patience poetry takes. My publisher sent the book to Mr. Keillor right after the book came out in October 2006. Now more than two years later, long after I stopped hoping to hear from him, I hear from him. And then hear from him again. This makes me hugely happy!

This is a poem I wrote, not surprisingly, during one of those beautiful but terrifying ice storms when the trees are weighed down with ice, when everything glistens, when the roads are a sheet of danger. I had three teenagers, each with a driver's license. Need I say more? You may have been there, too, awake, waiting for everyone to come safely home so you could go to sleep.

The poem was written as four separate, unrelated pieces of fast writing. Then I fused the parts together, found the link among the four parts. That, for me, is one of the most exciting parts of writing poetry, i.e., finding connections among things not apparently connected. The poem went through many, many drafts. It's a fairly simple poem, but one that I hope captures the beauty and terror of parenthood.