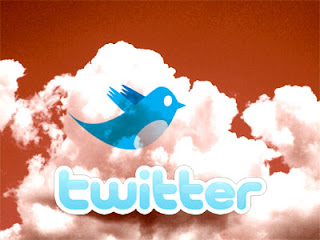 All I hear about these days is Twitter. Twitter, twitter. It seems like everyone is twittering. Politicians keep their constituency advised about hair appointments and dinner plans. News anchors ask viewers to twitter responses to stories. Even Oprah is now twittering. As soon as she signed on, she had thousands and thousands of followers. Now really, I thought, how could Oprah possibly have time to twitter? Maybe she has a staff person twitter for her. A scam twitterer?

There's even an article in the May / June issue of Poets & Writers. According to author Sarah Weinman, there are now more than six million users of Twitter. Many of them are writers. Some of the writers' blogs I visit have Twitter links and buttons.

I've been wondering what advantage might accrue. Apparently, the idea is to gather followers who then receive all of your "tweets." There's a limit of 140 characters to a tweet which might contain news, a link, daily drivel, etc. Even publishers have flocked to Twitter as a quick, easy, and free way of connecting with readers. Weinman says that authors use Twitter to provide links to work published online, to post reading schedules, and to offer submission guidelines. Sounds sensible. But then novelist Tayari Jones is quoted as saying that Twitter is "a crazy time-vampire." That's what I've been wondering—a good use of time or a waste of time?

Weinman's article does not draw any conclusions. She is unsure if authors are maximizing the possible uses of Twitter or if they should bother trying.

So how about it? Do you twitter? Has anything good happened as a result? Is this a good way to network? A good form of free pr? Or a time-vampire?