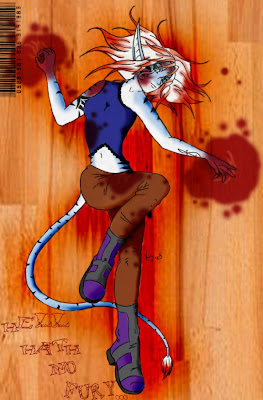 On Monday, October 13, I posted a link to my poem, "My Husband Discovers Poetry," which was featured at the Ars Poetica site. Thanks to everyone who read it and sent me a nice note! I was happy to see yesterday that fellow blogger and poet Elizabeth Kate Switaj had posted the link at her blog and done an analysis of the poem. Is there anything cooler than someone looking really carefully at your poem?

Elizabeth does me the honor of comparing my poem to James Joyce's short story, "The Dead." She ends her discussion by saying, "Now, I have no evidence that reading Joyce directly influenced the writing of Lockward’s poem. Joyce was hardly the first, last, or only one to depict the man as the artist in a couple. Comparing these specific pieces of literature, however, helps to throw light on how narratives change when women do the writing."

I'll shed some light on this. I've never read "The Dead." So I definitely was not influenced by that work. Nevertheless, as Elizabeth suggests, the couple in my poem does include an artist, a poet, but it's the woman who takes that role. And it's a woman who knows how to get even. Even though I can't claim Joyce as an influence, Elizabeth's comments have had me thinking all day about Conrad's Heart of Darkness, Kurtz and his Intended. And I remembered that Kurtz was once a poet before he became hollow at the core. Still I don't think of myself or that poem as following in any particular tradition. But then I wonder if we ever consciously follow in a tradition? Or if that's something that critics uncover? Certainly, the same issues and thus themes persist over time.

I don't usually like to talk about the personal details that went into a poem, but because I'm so often asked about this poem and because I think of it as an ars poetica, this is one poem I've been happy to talk about.

But the question I'm most often asked is "How does your husband respond to this poem?" People assume that the man in the poem is my real husband. They feel sorry for him. If he's in the room when I read the poem (which isn't very often), people turn to look at him, to gauge his reaction. Or they think he must be a creep and I'm well rid of him; they assume that I divorced him. One woman, I've been told, said to a group of people talking about the poem that I, me the poet, had to be a "mean-spirited" person to have written that poem. Now that's a woman who's never met me. Maybe I am mean-spirited, but she'll need better evidence than my poem. I have poems in which "I" am really quite nice.

This question was asked in an interview that appeared in Valparaiso Poetry Review. I'll excerpt that part:

Question:  I love the irony of "My Husband Discovers Poetry," the way it combines humor with gravitas. The wife has been spurned; now she spurns her husband. In the act of discovering poetry, the husband is tortured. Many have wondered if this happened or if it is part of your metaphorical life. Can you talk a bit about how the poem came about?

Response:  What touched off the poem was a conversation with a group of women poets I had just met. They were talking about husbands and boyfriends reading and responding to their poetry, and I stupidly said that my husband never read my poetry. There was an intake of breath and the women, one by one, expressed their disapproval of my husband. They thought it was terrible that he wasn't interested in my poetry, so then I felt I needed to defend him, but they weren't having any of it — they insisted he wasn't interested in my soul. As I thought about the conversation throughout the day, I found myself getting annoyed at my husband for putting me in that awkward situation, and I started asking myself why the heck he wasn't reading my poetry; at the same time, I had to acknowledge that I liked that he didn't read my work because I could write anything and not worry about his reactions. Then I started thinking I could say anything about him and he'd never know. I asked myself how such a wife might get even with such a husband, and the poem began to take shape. So to some extent, this is a kind of revenge poem. I also think of it as an ars poetica. It seems to be autobiographical, as first person poems often do, but by the time the reader gets to the end of the poem, hopefully he or she realizes that there has been some fabrication going on. That's what the wife does; that's what the poet does. But you're right — readers often assume that the poem is entirely autobiographical, and they are embarrassed and sorry for my poor husband. Actually, it's his favorite of my poems. Or should I say his favorite of the ones he's read?

Posted by Diane Lockward at 2:22 PM

Email ThisBlogThis!Share to TwitterShare to FacebookShare to Pinterest
Labels: poem