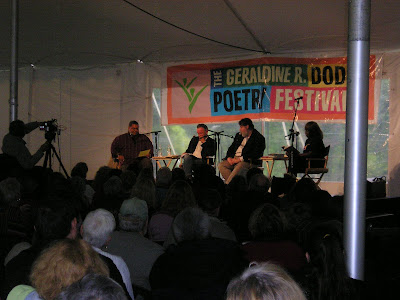 Saturday morning I arrived in time to catch the final minutes of Conversation: Poetry As Disruptive Seed, Poetry As Centering Force. Poets above are Chris Abani, Robin Robertson, Martin Espada, and Patricia Smith. The poets were asked, "How do you deal with poetry when there is evil?" Martin replied, "I don't." He said the evil produces the poems, creates the tension that fuels the poetry. Patricia added that poetry brings peace, is at least a start. It helps us and others confront what's bothering us. 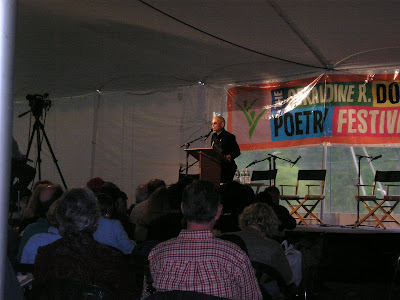 Then I remained in the same tent for a real powerhouse of a reading with Jan Beatty, Patricia Smith, and Joe Weil. With each one I thought that I sure wouldn't want to go next. But each of these poets completely held the stage. Jan's poetry is delivered in a fairly soft voice but is hard-edged, tough stuff. I liked the contrast between delivery and subject. 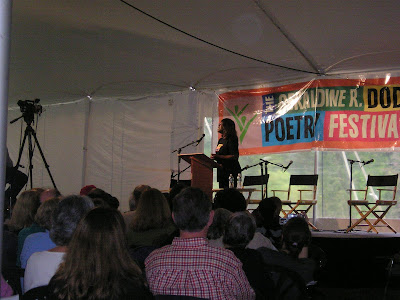 Patricia Smith is a past National Slam champion. She recites entirely from memory and is like a stick of dynamite! She read several persona poems, each in a different voice. Very convincing. 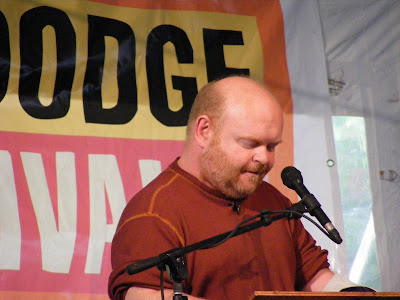 Joe Weil was the final reader. Thanks to Anthony Buccino. You can find photos of many other poets as well in Anthony Buccino's album. These three poets received a standing ovation from what looked like several hundred people in the audience.

One thing I don't get is why anyone would go to an open reading and miss the readings by the poets who are part of the festival. And yet I heard that most of the opens had more readers than could be accommodated. 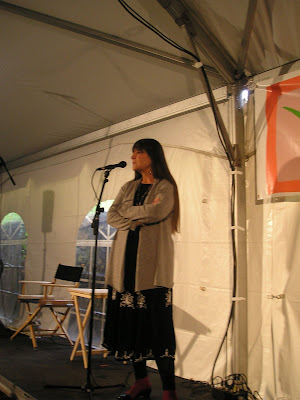 My first assignment of the day was introducing Dovie Thomason, a storyteller. Then after lunch I went to the Main Tent to hear Linda Pastan, Chris Abani, and Sharon Olds. 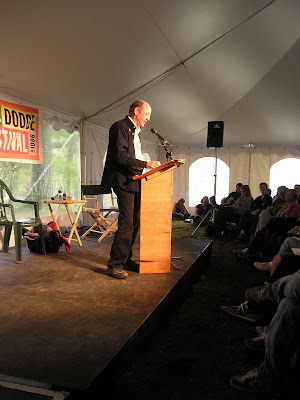 Then off to introduce Billy Collins in another of the Conversations on Craft. He delivered a well-organized list of tips on what makes a good poem. He qualified that: "That is, if you want to write poems like mine." Here are some of Collins' tips:

1. For a lyric poem the maximum number of occupants is two—"me and the reader." This creates intimacy.
2. Begin with something any reader can accept. Then he's willing to accept something more challenging later. Start at the shallow end and lead the reader in.
3. The wastebasket is your friend. The saved line won't be useful elsewhere. Start fresh. (Do I hear voices of disagreement?)
4. The idea is not to be emotional but to cause emotion in the reader. (Can you have one without the other? I think he means the poet must restrain, control the emotion.)
5. Begin a poem by backing it up to its impetus. (And yet how often is that the very thing I, and perhaps you, cut out of subsequent drafts?)
6. Keep titles simple.
7. Let a noun speak for itself. ("The road to Hell is paved with adjectives.")
8. Think in stanzas. Think in lines. (Not this poet, not until numerous drafts in.)
9. Let surprise enter the poem. (Yes! yes!)

I probably missed something along the way, but the above gives you something to think about. Collins also advised front-loading contest manuscripts. (Aren't judges onto that strategy?)

I was interested to hear Collins say that he writes a poem in one sitting. He gets the next line before he moves on. He revises as he goes along. This is definitely not me. My first drafts are all over the place. And there are many drafts. I don't look for form until I'm pretty well along. But in spite of several points on which I disagreed, this was an interesting conversation and gave me much to think about.

Posted by Diane Lockward at 3:21 PM