I had no assignments on the last day so was free to pick and choose. My plan was to go to "Conversation: The Poet As Citizen" with Chris Abani, Lucille Clifton, Robert Hass, and Ted Kooser. But that turned out to be the plan of a lot of people. By the time I arrived at the tent, it was packed. I had to stand at the periphery of the tent, outside and subject to the rain that was starting to fall. So I decided to just head for the nearest tent and take whatever was there as long as there was a roof overhead and a chair below . I landed at "Conversation: Going Public with Private Feelings" with Franz Wright, Linda Pastan, and Martin Espada. 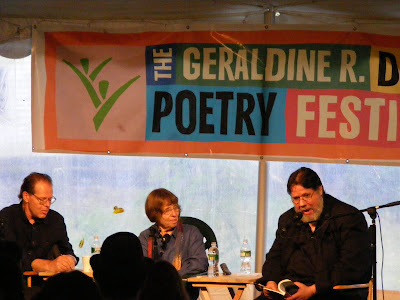 This picture came to me courtesy of Anthony Buccino. My move from one tent to another turned out to be fortuitous. This was a terrific session. As I arrived, Martin was saying that as a lawyer he values privacy, but as a poet his responsibility is not to his particular family but to the human spirit. It was obvious from the audience's questions that there's excessive concern about offending people. One of the panelists pointed out that most of the people you worry about offending won't ever read your poems.

Wright spoke about the struggle with self-consciousness and our desire for attention. He spoke of his unique position as the son of a famous poet. He shared his recollection of wondering if his father's poems were about him, and he acknowledged feeling some pain about that. 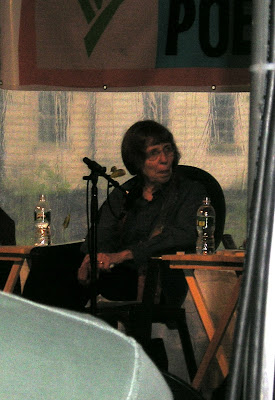 Pastan said there are no poems that she won't write. All agreed that the standard for going public is the poem itself. The final decisions are more technical than personal. I agree completely with this observation.

Someone asked if more things happen to poets than to other people. Pastan replied that she's lived a very ordinary life. She claimed to be more daring in her poetry than in her life. That resonated with me. I've said very much the same thing about my own life and poetry. 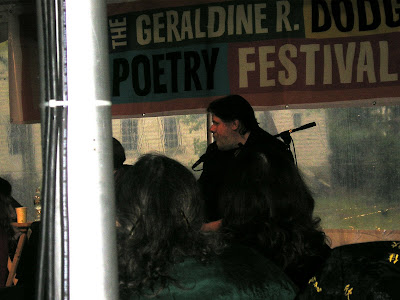 Someone who had previously met Pastan and been disappointed to learn that the facts in her poems are not always real facts said that she now understands more fully that poems aren't autobiographies. Martin added that poets make up stuff in the service of truth. I loved that as a closing point. This is an ongoing subject of debate among poets. I always get annoyed by the people who assume that the poem is and must be full of facts. Seems to me that's not their business. Their business is the poem. 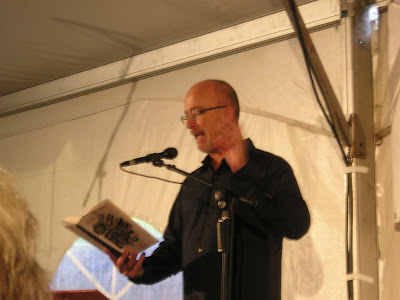 I then ended with a reading with Mark Doty 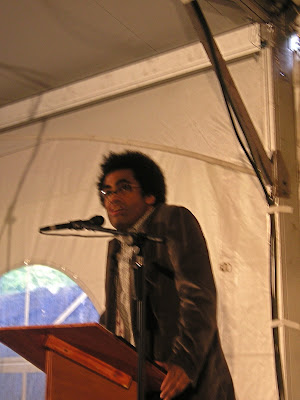 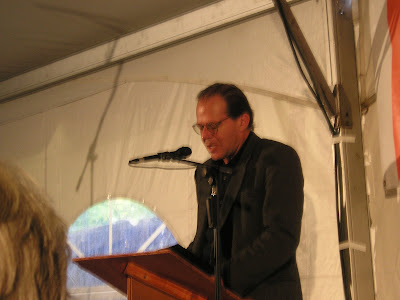 and Franz Wright. A terrific reading!

Had my last lunch in the Meeting House and headed on home with a long list of books to buy.
Dodge has now posted a number of videos at YouTube. These are readings from past festivals. This video library will grow. It's an amazing resource for teachers, poets, poetry fans. And everyone else. Here's a sample:

Posted by Diane Lockward at 2:15 PM