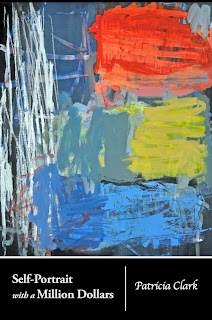 The following is the eighth in a series of brief interviews in which one Terrapin poet interviews another Terrapin poet, one whose book was affected by the Pandemic. The purpose of these interviews is to draw some attention to these books which missed out on book launches and in-person readings. Hayden Saunier talks with Patrica Clark about manuscript development, the function of a title poem, the selection of cover art, and more.


Hayden Saunier:  I’m fascinated by how poetry manuscripts develop. In Self-Portrait with a Million Dollars was there a central idea or proposition or moment that these poems gathered themselves around? A series of explorations that you return to again and again?

Patricia Clark: These poems that became a manuscript that came to be named Self-Portrait with a Million Dollars are not poems of a project, or an agenda. I can’t work that way—with an aim at a project defined ahead of time. I want to write out of my obsessions and, over time, see what results. What are the threads that unite these poems? Feasts, pleasures, and the falling away, the inevitable loss of such pleasures. The longing for connection with others, with ourselves, and with the world. The elegiac thread of loss, lost moments and chances, and also lost loves and selves, missed connections. The awfulness of flux. We want stability—but stasis is a horror—and we get only fragments, of course. Robert Frost’s description of a poem, each one as “a momentary stay against confusion.” Brief, yes, but such great moments and fragments!

Another way of looking at the poems gathered in the book is to note the epigraph at the book’s front by Elizabeth Bishop: “It is like what we imagine knowledge to be: dark, salt, clear, moving, utterly free.” Each poem included here is a bit (a micro bit) of knowledge, knowledge of living in our world. And I love her adjectives. Be ready for some cold, even frigid, North Atlantic water: “dark, salt, clear, moving, utterly free.” Brilliant. Finally, maybe each poem included here is a self-portrait but not called that, as the title poem is. Moments of living, moments of memory.

Hayden: The title poem appears toward the end of the collection and seems to explore the gap between expectation and reality—but I especially love how it also snapshots your family in a moment before “anyone was sundered,” a richness and wealth that we rarely recognize when we possess it. Could you comment on this?

Patricia: Yes, you put your finger on it: the difference or gap between expectation and reality. I don't mean the poem and the experience's end results to be such a letdown—it wasn't really. The buildup was so good, the vision I had was so spectacular, that of course no reality could ever live up to that. Still, I have the great memory of being there with my father, who took the time to bend to my wishes, and so I have/had it all—just not a glimpse of the coins. Well, until later. I did see them in a pile at the fair in Seattle. Memory has preserved it all, fabulously, and the sweet moment with my father. My goal in choosing a title was to have it be memorable, yes, and also to fit the book. I think it does.

Hayden: Tell me a little about the cover of this book. I’m drawn to its primary colors and abstraction but also to the texture and sense of scribble, the reworking and balancing of the shapes, all of which sounds like a writing process. So perhaps I am projecting my own process here. What drew you to this image?

Patricia: I have met this painter, the painter of "Darn"—Mary McDonnell—she's a Michigan painter from Saginaw, Theodore Roethke country. I love her work. Lots of bold abstractions and lots of marks on the canvas as you describe. She works on canvases on the floor, as I've heard her describe it, and she walks round and round the work trying to figure out the orientation, which edge is up. Yes, to me, the painting seems to reveal a process, quite similar to working one's way through a poem, the confusions, the attention to craft and to letting the "meaning" develop on its own almost. The painting is a record of an exploration—in paint, but very similar to a writer’s exploration in words. I was captivated by the boldness of the images and colors and maybe those primary colors speak, especially, to childhood and youth. Maybe the poems inside the book are, after all, primary experiences of dipping one's hand in cold water, as Bishop describes. And one feels something, an icy jolt. Wow, that's knowledge, huh? I like it. I hope my poems take the reader into such a primary experience—with seeing an owl, or walking in a garden.

Hayden:  “Feasting, Then” opens the first section with a call to attention to the small marvels and gifts surrounding us in the natural world. “And the Trees Did Nothing” is a poem that confronts our romantic notions about that natural world as the human one literally collides with it—there’s an icy jolt of “knowledge.” These are two examples, but all through the book, your attention and your language focus our eyes and ears on vivid, resonant details of both worlds. How did you develop this keenness of observation?

Patricia: Thanks for the compliment on "keenness of observation." I'll say right off, it has taken me years. And I'm still not really satisfied. How does one describe what one sees: whether a sky or a tree? Impossible. The real sight still escapes one, I think. What I am up to, I believe, is trying to tell the truth about something I see in the physical world. When I get stuck in the poem, I return to that, over and over. What was there? What else was there? Was that everything? And don't make it too beautiful? what was on the ground? Some trash? some dog poop? Let the "divine details" (Nabokov's words) speak. And they will and the poet can step out of the way. And back to another poet, William Carlos Williams—"No ideas but in things." I have no "idea" what a poem is up to—I want to let the details speak and tell the story, tell the moment. If I can do that well, I've done my job, I believe. And it's not easy, even then. If I get the “small” picture right, the big picture of the poem (its meaning, its thoughts and movement) should take care of itself.

Hayden: Often, a poem doesn’t find a first publisher before being included in a book, a poem that we, as writers, adore and are baffled by the fact that the poem never found a home in a journal.  Do you have a favorite poem from this book that was ignored or homeless that we can give its full due now?

Patricia: I honestly don't remember the poems and their publication history. I could look it up but won't. I’ll pick out a poem that appeared first in Galway Review in Ireland, a place I love. “After the Darkest Year” only made the journey out one time and it was accepted by the magazine right off, and published very quickly. I pick it out for a few more moments of attention because I wish readers would take the time (if they don’t already) to read poems out loud. This poem is one that I think gets on a particular linguistic, sonic roll. And it’s basically all one sentence. I was trying to just describe and describe and not worry at all about where the poem was heading. Just give the horse its head and let it run! So that’s what I did. Is the darkest year just winter, or something more? Oh, let the reader open to whatever thoughts come to him/her. All of those are in there and are correct. Happy reading!

Sample poem from Self-Portrait with a Million Dollars:


After the Darkest Year

Out of verdant and lush,
oak leaf, Virginia creeper vine,
blackberry wild as today’s wind,
sumac, invasive honeysuckle,
each different leaf a knuckle, earlobe, or palm
of the hand,

in thirty days no less, from dormant
to swaying, leaves shivering and trembling,
one side grayer, one side slick,
shiny on top,

and what gets through of sunlight
dappled and shade-crazed,
sunburst down to a single blade
standing tall on ravine-floor,
leaf-pile, leaf mold, crackle
of still dried stalk and spent
blossom trundled from the yard,

an ancient process, green
to done, down, trampled on, spent,
left here to vegetate, pack deep
under snow, decompose,
and then all starts again,

warbler time just after dormancy breaks,
bud swell and pencil point unfurling
of green, each blossom and ear leaf
sparking in its time—trillium, may-
apple, redbud, lilac, more—
and the welcome scents
[cont’d; no stanza]
lively on the air, fresh and new
as any flower, note of honey,
jasmine, vanilla, lemon, bark,

till all is filled, unfurled, spread wide
and out—umbrella canopy, wand of
Solomon’s seal with berries white,
dangling, ripe—and whose mouth
will surround, pull them off to eat?

So sudden you could blink, miss it, lose
sight of dame’s rocket imagining it
phlox when it’s not, lavender, white,
and pink covering a slope, a hill,
an elevated bank by the creek
or by the busy road usually all dun
and trash, dirt, dust, but now
a gorgeous swell, in bloom, so brief.

Hayden Saunier’s most recent book, A Cartography of Home, was published in 2021 by Terrapin Books. Her work has been published in numerous journals, featured on Poetry Daily, The Writer's Almanac, and Verse Daily, and awarded the Pablo Neruda Prize and the Rattle Poetry Prize. She is the founder and director of No River Twice, an interactive, audience-driven poetry performance group. www.haydensaunier.com

Posted by Diane Lockward at 6:46 PM