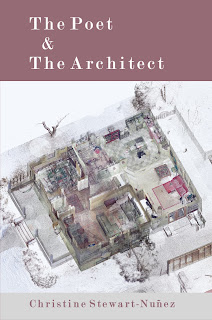 The following is the seventh in a series of brief interviews in which one Terrapin poet interviews another Terrapin poet, one whose book was affected by the Pandemic. The purpose of these interviews is to draw some attention to these books which missed out on book launches and in-person readings. Ann Fisher-Wirth talks with Christine Stewart-Nuñez about book organization, marriage to another creative person, motherhood and poetry, and being a state Poet Laureate.

Ann Fisher-Wirth: In one poem toward the end of The Poet & the Architect, “Map and Meaning,” you write of the difficulty of learning to make “one’s own map” rather than relying on the maps created by others, and you say that the map you eventually created “marked the spirals of stops along my path.” The book itself is structured into four “Rings,” and each section page that announces a new ring has a little drawing of a spiral. So I’d like to invite you to tell us about spirals. What do they signify to you, both in organizing this book and—perhaps—in organizing the “map” of your life?

Christine Stewart-Nuñez: I’m so glad you asked about the spiral! It’s long been a symbol I’ve used. I kept some of my writing from grade school, and spirals abound in the margins of that saved work. Even now, I use the symbol to show “insight” when I’m annotating the margins of a text. In The Poet & The Architect, besides existing as an image in some of the poems, it also serves as an organizational strategy. The spiral helped me conceptualize how poems could return to earlier themes, picking up images introduced in those poems and broadening or expanding them. I decided to start each ring with the most intimate poems and move outward from there. For example, the first poems are short and set both spatially and temporally before the meeting of the poet and the architect. Next the poems move outward from the intimacy of new coupledom to establishing a family and experiencing life together. “Credo,” which employs syllabic lines based on fractal integers, gathers fractal images from life, nature, and architecture, and ends the book with an invocation of time and space in a much broader context. I think ultimately the spiral captures my sense of time—moving forward yet reaching back to a central core. For example, “Credo” ends by connecting the birth of my son Xavier, the death of my sister Theresa, and divine light.

Ann: The Poet & the Architect is a book about a poet who is a wife and a husband who is an architect. Both are creators, and both are engaged in the fundamental work of building a home. What do these two callings share? What have you learned from each other’s work?

Christine: I didn’t really understand myself as an artist—as a maker of things—until I met Brian. Through our conversations, and through my observations of the way he works, I realized that the processes of writing and designing are so similar; I reference that several times in the book, but most specifically in “The Process of an Architect’s Thinking.” By identifying as a literary artist, I give myself permission to experiment more, to play more.

From Brian, I’ve learned a lot about how to engage buildings and places as products of design (or lack thereof). Until recently, I’ve seen myself only as a consumer of buildings—I vastly underappreciated what kinds of work went into creating them. When I asked Brian what he’s learned from my work, he said: “I have found that architecture and poetry have more in common in conveyance than any other form of writing. Architectural drawing, according to Nelson Goodman, is at once sketch, score, and script. It depicts the project, it constructs the project, and it programs the project. Poetic writing at once gives one an image, presents how to say it, and delineates meaning in a way that is analogous to architectural communication.”

Also, I didn’t anticipate learning how energizing it feels to apply the lessons of “process” to building a life together as a couple and as a family.

Ann: Motherhood is a central focus in your book. There are poems about LEGOS and gingerbread houses, a little boy’s fascination with wildfires and typhoons, and also poems about your older son’s seizures and other health problems, poems that add to the developing body of disability literature. In your writing, what are some ways you have found to approach this latter, intensely personal material?

Christine: My approach to motherhood poems comes from a similar emotional space as my other poems: I sense a tension that I want to think more about. Whether it’s a confounding event, an interesting juxtaposition, a pairing of words, or an emotional knot—I want to explore it through sounds, imagery, and (often) metaphor. Even before my oldest son was diagnosed with a rare epilepsy syndrome that caused him to lose his ability to use and understand language for several years, I wrote about him learning to talk. As a poet and mother, I wanted to think more about how my child would learn—and use language in particular. So when these skills began to regress, I needed to explore it with the tools I possessed; most of those poems are in Bluewords Greening. Now, though, I’m interested in exploring how my relationship to parenting has shifted and changed as a result of this experience. In The Poet & The Architect, the poems inspired by Holden are largely speculative; I wonder what his future holds.

That said, I reflect a lot on the ways I represent personal material after the poems get drafted. Within the constraints of the genre, there’s not space for explanation. Because of this, personal experience can transform into something that reads far more abstract, or it gets reduced to one of its many facets. Both can be problematic. I also think a lot about shame, and the reasons that embodied realities like seizures and the behaviors associated with them are stigmatized. When I speculate about what happens to Holden’s memories when impacted by seizure activity, for example, I push against the stigma of epilepsy—naming it, exploring it, discussing what it can do. Of course, my understanding is limited; I can observe and read about seizures, but I’ve never had one.

Ann: You were recently Poet Laureate of South Dakota, and it seems that some of your poems reflect that public engagement—for instance, “Research,” “Marker of Medary,” “Mall Manifesto,” “A Good Building.” Though still personal, they turn outward to consider towns, buildings, history. Please tell us about the relationship between your laureateship and your poetry; did being a poet laureate lead your work in particular directions?

Christine: I often write about place—especially places new to me, places where I’m there, in part, to learn and observe. But it took a decade of living in South Dakota before a South Dakota poem tumbled out. Most of the poems in The Poet & The Architect were drafted before I was appointed poet laureate—influenced by seeing the landscape and architecture through Brian’s eyes. But the laureateship did give me me a stronger sense of citizenship, of wanting to make that place a weightier thread of the book.


Sample poem from The Poet & The Architect:


My husband and I were midnight whispering
in the moment the soul opens after the body’s
sated, that moment when everything’s laid bare
and imagination, past, and present collide—
everything compossible—when he tells me
he helped design a project that still haunts him.

The clients? New Yorkers. Creepy, slick, budget
unlimited. The elder, founder of the lingerie
store housed in every American mall, introduced
the younger client to the team, and he requested
a cabin, a picnic place for models featuring baskets,
bearskin rugs, and a fireplace for cold desert nights.

A glass wall overlooked a vista in New Mexico;
the road-facing wall was windowless save a few
narrow slits. Silk against skin. They shook hands.

How close can one get to evil before it tarnishes?
My husband’s heart skittered across history: architects
who designed concentration camps and gallows.

He wondered how much they knew and when
and how they felt about knowing. He wondered
if design could help men to do bad better. At 55,
he can draw that cabin from memory—the same one
he drew at age 32, the year his daughter was born,
the year a surgeon scraped out a tumor from his knee—
and he can still feel that post-meeting handshake.
That cabin made the news this week: Predator. Sex
trafficking. Hundreds of girls. Now nightmares cross
my husband’s midnights: his hand erases walls, line
after line, page after page until, as he rubs the last angle
away, the cabin returns. Over and over, he begins again.

Christine Stewart-Nuñez, South Dakota’s poet laureate from 2019-2021, is the author and editor of several books, including The Poet & The Architect (2021), Untrussed (2016) and Bluewords Greening (2016), winner of the 2018 Whirling Prize (literature of disability theme). Her poetry has been the basis for international, cross-artistic collaborations with colleagues in music, dance, visual art, and architecture. She recently joined the faculty of arts at the University of Manitoba, where she teaches in the women’s and gender studies program.
christinestewartnunez.com


Ann Fisher-Wirth’s sixth book of poems is The Bones of Winter Birds (Terrapin Books, 2019). Her fifth, Mississippi, is a poetry/photography collaboration with Maude Schuyler Clay (Wings Press, 2018). With Laura-Gray Street, she coedited The Ecopoetry Anthology (Trinity UP, 2013). A senior fellow of the Black Earth Institute, she has had Fulbrights to Switzerland and Sweden, and residencies at Djerassi, Hedgebrook, The Mesa Refuge, and Camac/France; next October, she’ll be in residence at Storyknife, in Homer, Alaska. Her work has received two MAC poetry fellowships, the MS Institute of Arts and Letters poetry prize, and the Rita Dove poetry prize. She teaches at the University of Mississippi, where she also directs the interdisciplinary environmental studies program. For many years, she taught yoga in Oxford, MS.
www.annfisherwirth.com

Posted by Diane Lockward at 1:25 PM