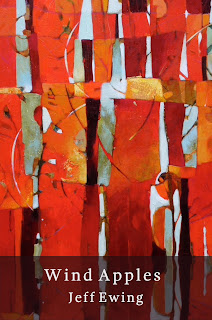 The following is the sixth in a series of brief interviews in which one Terrapin poet interviews another Terrapin poet, one whose book was affected by the Pandemic. The purpose of these interviews is to draw some attention to these books which missed out on book launches and in-person readings. Lisa Bellamy talks with Jeff Ewing about what's it's like to write in multiple genres, his use of point of view, and his unique writing process.

Lisa Bellamy: Jeff, Wind Apples is such a memorable poetry collection! I was delighted to have the opportunity to read it. Your biography notes it is your first, and that you’ve written and published in other genres. What led you to poetry, specifically?

Jeff Ewing: Hi Lisa, and thanks for that. I’m really glad you enjoyed it. It is my first poetry book, but it’s been quite a while in the making. I’m not sure whether I came to poetry first, or if—as seems likely—I started with stories, but it was very early. I do like variety, and have been unable, or unwilling, to settle on a single genre. I jump back and forth between poetry, fiction, and nonfiction, with the occasional short play thrown in to round things out. What draws me to poetry is that it lets me play with language more freely, and to tie images and ideas together with a sort of finer thread. I was exposed early on to poetry that seemed far different from the customary grade school assignments. My father was a big Robert Frost fan, and he used to recite his poems as if it were the most natural thing in the world. Not the usual ones; he tended toward the epics. He could sail effortlessly through “The Death of the Hired Man,” but I remember “Mending Wall” and “Birches” making an early impression too. He really loved them, and the effect they had on him was eye-opening. They became a part of him, almost as if he’d helped write them. I think poetry can give you that feeling of participation, that your own thoughts have been captured and refined by someone else.

Lisa: Given that you write in several genres, could you talk about your process? What guides you to knowing whether you’ll work with material in poetry, rather than in one of your other genres?

Jeff: Most times an idea presents itself early on as what it’s going to be—a poem or story or a play. Essays are pretty easy to isolate, since they necessitate sticking to the facts. With other ideas—it may be a phrase or an image or a situation—I look to see what aspect of it calls for treatment. Conflicts or journeys, for instance, usually (though not always) are best suited to fiction. Phrases and very distinct images probably suggest a poem; playing with the language, following one line to the next by practiced guesswork. Many of my poems seem to cascade in that way, by sound as much as sense. Not to say they’re necessarily abstract, just that sound in a poem is very central for me. It’s what separates poems most clearly from the other forms. It’s hard to sustain that kind of music in a story or a play, though they can certainly feature that. And there have been times I’ve changed course in the middle of writing—realizing that a poem should have been a story, or the other way around, or a story would be better reduced to dialogue alone. A few times I’ve explored the same idea in several genres, written a poem over again as a story, or whittled a story down to a poem. It’s fun to play with those things. That, by the way, is a central part of why I write in the first place. The fun and thrill of watching something come out of nothing.

Lisa: Wind apples is such an evocative phrase. I know the meaning—windfalls—but the phrase invites the reader to a wider meaning, a metaphor. And of course, it is the title poem. Is there more you could say about that?

Jeff: The poem really originated from the notion of the mnemonic quality of a smell drifting on the wind. “Wind apples” in that sense, imaginative apples (rotting, tellingly) acting as a trigger. Like the taste of a madeleine, famously. The image of the windfall apples (“the last scrimped fruit”) are a concrete bridge to that idea, to memories stumbled across after their prime. Apples evoke a great deal for me, I’m not sure exactly why. But they can stand in for any common, tangible thing that opens the floodgates. The image seemed apt to the collection, where memory is often both a comfort and a burden, or a taunt.

Lisa: In some poems, the narrator views characters from a different perspective, as in “As the Crow Flies,” or from a third-person perspective, as in “On the Death, by Trampling, of a Man in Modoc County.” What does this change-up do artistically for you, as a writer?

Jeff: It’s very freeing to get away from the constant “I.” Seeing the scene from an abstracted point of view—in “As the Crow Flies”—or a third person, really does allow me to put myself at that vantage. To get a wider, more objective view of the action. The default “I” point of view of a lot of poems—mine included—does convey a certain intimacy, but it’s also constricting. Claustrophobic. I get itchy and anxious after a while. It’s clearly the point of view a writer has the most authority over and experience with, but there’s a danger of coming to see it as genuinely authoritative. As a reader, it makes me suspicious and a little resentful. Like most people I get tired of myself, and it’s a relief sometimes to break out of that.

Lisa: The varied stanza constructions in your collection fascinate me! Each poem has its own “stanza strategy,” so to speak. How do you build your poems? What choices do you make? What is the process?

Jeff:. I wish I could say I have a process. I write when I can—I’ve always had jobs with no connection to poetry or imaginative writing. It’s made my output less than it might have been, but it’s also allowed me to retain a level of excitement at the prospect of sitting down. I think it’s common to feel a little lost at the beginning of each new project, but it’s not unpleasant for me. Each poem is a fresh start. I become something of an amnesiac; suddenly I’ve never done this before and have to dive in blindly. A framework of some kind can help. Occasionally I’ll set out to use an established form, a villanelle or a sestina maybe, but often I’ll devise my own purely arbitrary structure. A given number of lines per stanza, for example; or a visual layout, two lines flush left, one line indented; a single stanza without punctuation carrying a head of steam all the way through. Anything, really, that eliminates a range of options and forces me to focus on manipulating what’s left. It really opens doors for me. That said, a form might change completely during revision, when the plan I’d started out with forces unnatural line breaks or kills the pace. But as a starting point, I find it very helpful. Poems can too easily become uncontrolled and indulgent, and a little bit of a fence—"something there is that doesn’t love a wall” notwithstanding—can corral it before it runs off into the brush.


The orchard, ghosted
in fog, rises in ranks
toward Orion.

The last scrimped
fruit thuds to ground
like footsteps

myself coming back
when I can’t sleep
and the trees—

with remembered harvests.
When the smell of
cider on caught

breath and the spill of
light ripening on
moon-washed skin

drags me uphill again.
One leg stiff with
cold and wear,

my blood thick as
winter sap, I find
our old spot

and eat myself sick
on wind apples,
lug after lug,

carried in unforgiving
gusts down from
the gray crest.

Jeff Ewing is the author of Wind Apples (Terrapin Books, 2021), and The Middle Ground: Stories (Into the Void Press, 2019). His poems, fiction, and essays have appeared in publications in the U.S. and abroad, and his plays have been staged in New York, Los Angeles, and Buffalo, New York. He has lived in Chicago, Santa Cruz, and Bergen, Norway, working variously as a technical writer, editor, newsroom PA, copier repairman, forklift driver, longshoreman, and salad boy. He now lives in Sacramento, California, where he grew up.
www.jeffewing.com/

Lisa Bellamy studies poetry with Philip Schultz at The Writers Studio, where she also teaches. She is the author of The Northway (Terrapin Books, 2018) and a chapbook, Nectar (Encircle Publications chapbook prize, 2011). She has received a Pushcart Prize, a Pushcart Special Mention, and a Fugue Poetry Prize. She is working on new collections of poetry and beast fables. She lives in Brooklyn, New York, and the Adirondack Park with her husband.
www.lisabellamypoet.com