Countdown to Publication: The Cover Story

Before my first book, Eve's Red Dress, came out in 2003, I admired the cover art on the book of another poet I knew. When I attended the book party for that poet, I met Brian Rumbolo, the artist, and asked if he'd be interested in doing my cover art if my publisher agreed. He said Yes and my publisher agreed. I loved the cover that resulted. So when the manuscript for What Feeds Us, my second book, was together, I asked my publisher if we could again use the same artist. Again, he agreed. Again, I loved the result. So when the third book—okay, you get the picture. Yes, my new cover is by Brian Rumbolo. I think he's an amazing young artist.

I sent him the title poem and a handful of others that I thought captured the essence of the collection. He then sent me one piece. I loved it, but since Brian had in the past sent me several sketches to choose from, I asked for one more. I was asking for trouble as I loved that one too. (No, I don't love everything! I'm really not that easy to please.) I vacillated for a few weeks. I made the mistake of asking for other people's opinions. I say "mistake" because the votes were 50-50. But my publisher favored the first one and so did I by that point.

Then someone said, "Oh, that's Hiroshige's Wave." I didn't know who or what that was, though it turns out that I should have. I did a Google search and the first thing that came up was the exact image of MY wave. 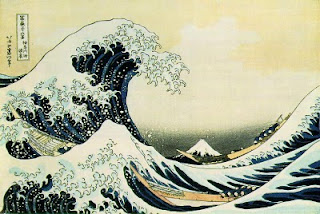 I thought, Oh no, now I can't use that one. But I did some more research and learned that Hiroshige himself had borrowed the wave from his teacher and that it has become a practice and a tradition for other artists to create their own renditions of the wave. I liked that sense of history. Other artists have put boats, trees, flowers inside the wave. I liked my piece even more now with its insertion of a woman—and there's a woman in the title poem, a woman who wants to walk into the sea. I also learned that this tradition is associated with Japanese haiku. Poetry and Art. Furthermore, my title poem is an ekphrastic one, based on Matisse's Open Window. So I was back in love again. When I later asked Brian if he'd used Hiroshige's Wave, he replied, Oh yes, it's my favorite image. Mine too now.

And so my mind was made up. Then onward to the layout—the publisher's job. I asked him, though, to leave as much of the art work visible as possible. Thus the name bar at the bottom instead of my name somewhere in the midst of the art work.

Posted by Diane Lockward at 1:14 PM