Praise for a Teacher 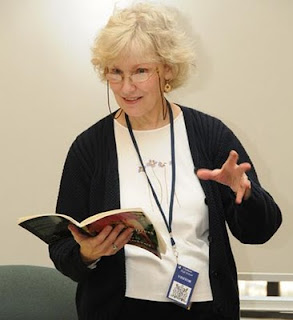 Two weeks ago I spent time at Chatham High School as the visiting poet for Mrs. Lori Roper's English classes. On both Monday and Friday I spent one hour with a group of seniors and then one hour with a group of freshmen. We talked a bit about poetry. Then I took the kids through two different writing activities. They were such terrific groups! They read their poems, and I was very impressed. But no surprise, really, as that's what happens when a teacher brings poets and poetry into her classes. There is simply no better way to get kids thinking creatively and playing with language. So kudos to Lori Roper for initiating the Guest Writers Series at her school.

When Mrs. Roper began teaching at Chatham High School, she inherited the school's dormant literary magazine. She held an Open Mic night and brought the journal back to life. Then she went a few steps beyond and applied for and won an Unsung Heroes Grant. With the money which is given for her discretionary use, she began the Guest Writers Series and a Poetry Festival. Not one festival per year, but two! One in the fall and one in the spring. It was my pleasure to be part of last Friday's spring Poetry Festival.

The event was held in the auditorium which was packed with approximately 500 students. Students came in for a single period as they were able to be excused from classes and/or during free periods. Each one-hour session included students who had signed up to read poetry or sing. The poetry could be something the student had written or simply something the student liked by someone else. The music was a wonderful addition to the festival. There were individual singers, duets, and groups. Lots of instruments. And in the background was a large screen where student art was projected. What a wonderful mixture of poetry, music, and art. My role was to read 3 of my own poems. It was quite thrilling to read for such a large audience—as well as a bit terrifying, especially in a dark room where I could not see any faces.

I loved being Chatham's Guest Writer and then reading at the festival. I hope the administration and students realize how fortunate they are to have Lori Roper on the faculty.

The Chatham Courier ran an article about my visit.

Here's the poem read by Mrs. Roper at the festival:

Out of the night that covers me,
Black as the Pit from pole to pole,
I thank whatever gods may be
For my unconquerable soul.

In the fell clutch of circumstance
I have not winced nor cried aloud.
Under the bludgeonings of chance
My head is bloody, but unbowed.

Beyond this place of wrath and tears
Looms but the Horror of the shade,
And yet the menace of the years
Finds, and shall find, me unafraid.

It matters not how strait the gate,
How charged with punishments the scroll.
I am the master of my fate:
I am the captain of my soul.

Posted by Diane Lockward at 6:23 PM