The Poet on the Poem: Ed Byrne

You may already know Ed Byrne as the editor of Valparaiso Poetry Review, one of our better online journals. You may also know Ed through his blog, One Poet's Notes. You may already also know him as a poet. If not, here's a chance to fill in that gap. It is a particular pleasure to put the spotlight on a poet who, in his other capacities, so often puts the spotlight on other poets. 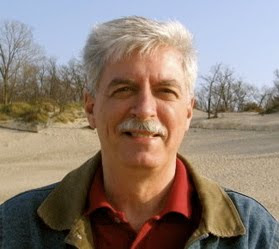 Edward Byrne is the author of six collections of poetry, most recently Seeded Light (Turning Point Books, 2010). His poems have appeared in numerous journals such as American Poetry Review, Missouri Review, and North American Review. His essays of literary criticism have been published in various journals and book collections, including Mark Strand (Chelsea House Publishers), edited by Harold Bloom, and A Condition of the Spirit: The Life and Work of Larry Levis (Eastern Washington University Press), edited by Christopher Buckley and Alexander Long. He is a professor in the English Department at Valparaiso University, where he edits Valparaiso Poetry Review. 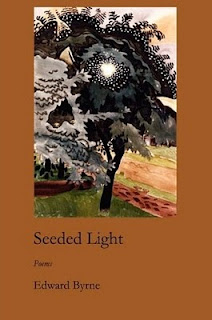 Before breakfast, passing below the blank
. . . . .windows of lovers' hotel rooms, we walked

toward the harbor. At the end of a steep
. . . . .cobblestone street, we could see the water's

edge, its morning mist still lifting
. . . . .like a vague gray veil and dissipating

as if in some deliberate act of abandonment,
. . . . .although the horizon line was yet nowhere

to be seen. A few boys in black coats
. . . . .huddled together against the still chilly

spring weather. Beside the low wall
. . . . .along the wharf that now seemed bleached

white by an early light, hands cupped
. . . . .for shelter from the wind, they smoked

they'd told before. Alone among rows
. . . . .of umbrellaless cafe tables, you wrote

notes home on a picture postcard
. . . . .addressed to your sister, while I bought

fresh fruit and flowers at the market,
. . . . .even though I could not find the yellow

Returning, we moved through the public
. . . . .park, its thin trees and clusters of lilac

As we followed the red brick path
. . . . .all around a reflecting pool, we listened

to the shrill whistle of an overnight
. . . . .train finally arriving at the railway

terminal, and we heard the slow toll
. . . . .of cathedral bells calling parishioners

for morning Mass, both of us believing
. . . . .each sound offered its own form of warning.


DL: The title of this poem is a good example of the power a title can have. Yours colors the reader’s understanding of and emotional response to the poem. Did it come before or after you wrote the poem? Did you set out to write a poem about a miscarriage?

EB: I never decide upon a title for a poem before the end of writing a first draft, especially because my method of writing does not allow for me to know what the poem will concern until I am somewhat into the process of composition. I almost always begin with only an image or phrase that I regard as interesting, which initiates a discovery of other lines describing scenes and actions, one leading to another. I remember that this poem initiated with the following simple thought and straightforward opening statement: “Below windows of hotel rooms, we walked toward the harbor.”

I frequently comment that my poems begin with an image or incident, seek out a conflict, and arrive at a resolution, whether stated or suggested by the close of the poem. When I wrote this poem, I didn’t know what the topic would be until I was two-thirds of the way through the original draft. At that point I realized I was wondering about the emotional state of a couple that has felt a sense of loss.

The poem is not autobiographical or documentary. Indeed, after the book was published, my wife had to assure friends and relatives that she’d not kept from them the secret of a miscarriage. Instead, I drew inspiration from those I have known who have been through such a situation. I also considered how my parents might have felt after a sister of mine died in her infancy when I was young. In addition, I might have been reflecting an emotion felt when my own son was diagnosed with autism—representing an initial awareness parents of autistic children often experience, that the individual they had envisioned growing up and inhabiting a certain kind of imagined future had somehow been taken away from them.

DL: In addition to the work done by the title, your details provide an understory, a sub-text. For example, “boys in black coats,” “Shrill whistle,” “slow toll / of cathedral bells,” “morning Mass,” and “its own form of warning” convey an untold story and heighten the emotional intensity. How do you manage to balance the lyric and narrative impulses?

EB: My style of writing seems to naturally combine lyric language and ingredients of narrative or implied narrative subtexts. I feel comfortable with this mixture. Indeed, I intend that the two parts complement one another. Most of the details you mention were added in revisions (although all of them come from specific memories I have about various actual instances) after I had established the context of the poem, and each was inserted in order to create an ambiance supporting the subject matter or as a contrast to the position in which the couple find themselves.

My personal history includes interest in film studies, a topic that I have taught over the years and about which I have written extensively in the past. As my wife can verify, when watching films I’m always conscious of the many minor components within the frame of the screen. Directors making movies are aware of the contribution subtle background atmosphere (natural scenery, weather, sounds, actions, set decorations, and extra actors populating the area) can add to a film moment’s dramatic tension and emotional tone, even offering possible undercurrents or sub-plots. In my poetry I try to think cinematically and inject images or elements evoking various senses, as well as objects that mirror the kind of attention to detail I observe in effective movie scenes.

DL: What attracts you to the 2-line stanza?

EB: I have always believed the opening and closing lines of stanzas receive added attention from readers, and perhaps this form similarly forces such a concentrated focus on each line in the poem. Also, since my lines tend to be longer, the added white space between the many couplets serves to lessen the weight the poem might appear to have if the stanzas were shaped into large black blocks of print. I like to think of the stanza breaks as the leaven, substances that lift or transform what otherwise could be a heavy and doughy passage burdening the poetry.

I like the way the two-step form gives an illusion of order and a feeling of regular pacing throughout the poem, while the language remains a more relaxed and familiar free verse, presenting a tension between an apparently arranged stanza pattern and the casual flexibility within the lines. I am a big fan of jazz musicians, particularly those figures from the bebop era who used riffs from a standard song as a starting point around which they improvised and wound inventive solos. I like to think that in a small way the free verse two-step stanza imitates that method.

DL: Tell us about your use of syllabics.

EB: In the past I would write first drafts of poems in syllabic form: for instance, counting 8 or 9 or 10 syllables per line, sometimes simply for fun as an exercise. Then in the revisions I would add or subtract syllables as I sought more exact words or inserted more lyrical choices. Therefore, the final draft would contain only a rough resemblance to the strict syllabics in the original version. Still, the ghostly sense of syllabic form would somehow remain when readers encountered the poem.

In fact, even though I didn’t attempt to preserve the syllabics, and I thought the lines in final drafts always varied from the initial composition, occasionally the syllabic pattern would withstand the revisions. When one of my colleagues once asked me about a poem in one of my books that he taught to his class as an example of syllabic form, I had to confide to him that I was surprised because I thought I’d lost the true syllabic form when I had made many emendations in revision. In fact, I’d never counted the syllables after the first draft and didn’t realize the syllabic count had survived my revisions.

DL: You have a wonderful ear for the music in language. I find internal rhyme, assonance, consonance, and alliteration. To what extent do you labor to make use of such sonic devices? At what stage in your drafting do they enter in?

EB: If there were an aspect of my poetry that I find myself enjoying the most, the musicality of the work would be a primary candidate. As you indicate, I like to employ various devices that more subtly assimilate sound as a central element: internal rhyme, near rhyme, alliteration, assonance, or consonance. I enjoy adding onomatopoeic words as well. At times, I even playfully place words that are anagrams within lines of poems just for the ways they resemble one another in the reader’s eye and maybe the reader’s ear (i.e., “form” and “from,” “trace” and “crate,” or “grown” and “wrong”).

I’m also aware of purposely trying to have the speaker’s voice group similar sounding words or phrases and use vowels or consonants that imitate the tone of the content in the poem, perhaps contemplative or combative—whether with soothing softer sounds or the introduction of harder and harsher notes. Again thinking cinematically, I compare such an aural motif to soundtrack music that echoes the mood in a movie.

I regularly remind my students that writers must love words for their denotative meanings and connotative suggestions, as well as for their historic or cultural associations. I know I do. Moreover, they should be prepared to exploit the musicality of the language, appealing to the ear as well as the eye. If our selections are accurate and effective, each facet of the perfect word in any line of a poem could contribute to the overall goal of evoking emotional and intellectual responses from readers.

Posted by Diane Lockward at 8:30 AM