The Poetry Party went really well. I was sort of nervous about the turnout as it was day 2 of Rosh Hashanah and there were two other readings going on not too far away, both with popular poets.

But we had 25 poets and a handful of people who were there just to listen. The theme, "When Arts Collide," worked very nicely. A few people even wrote and read poems just for the occasion. Others had a good time finding something that would fit. So we had poems about music and one that included some singing. Several poems based on paintings. A handful about the fine art of cooking. A few about dancing. All in all, a very interesting mixture.

One poet, Ray Brown, sent me a note prior to the reading saying that he'd written a poem that had been inspired by my poem, "Organic Fruit," and a poem by Anthony Buccino. So we read those three poems, one after the other, with Ray last. How's that for a collision among poems?

We went in two rounds with each poet reading one poem in each round. This method kept things moving right along. This also meant that all poets had the full room for at least one of their poems. Most poets stayed the entire time. In fact, I noticed only one leaving after she read her second poem. I kept the poets to a one-page maximum poem length. And I was strict! One poem each round, no more than one page each. And don't argue with me!

Our poets ranged in age from 10-80! Some had been at the May Poetry Party. Others were first-timers. One was so anxious to read that he arrived a full day ahead of time. Fortunately, he returned a day later. Many of our poets were well-acquainted with the podium. One read for the very first time in public.

Several stayed for dinner after the reading which was a fun way to end the day.

I'm going to admit here that I often want to pull out my hair at an open reading. If I'm not the featured poet, I usually leave before they begin. If I am the featured poet, I almost always stay, but sometimes to my regret. If the host fails to enforce the time limits. If someone blabs on and on before, during, and after the poem. If readers are permitted to read more than two poems, regardless of how many readers have signed up. And especially if I see open readers in the audience working on their own poems while I'm at the front of the room reading! More especially when open readers arrive just as I'm finishing, just in time to be an open reader.

But I know that poets want and need places to read. I've got a place. So I invented the Poetry Party and must say I've enjoyed both and plan to do another. 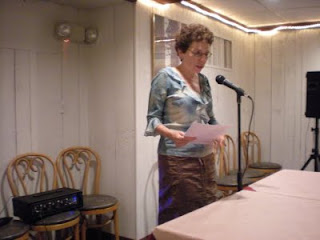 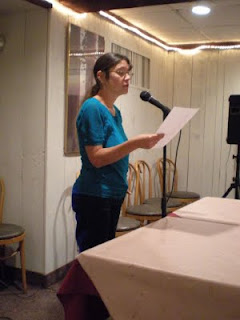 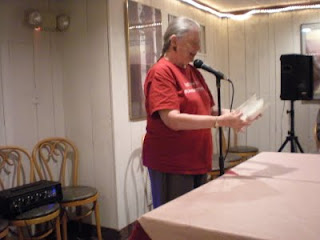 Posted by Diane Lockward at 3:09 PM