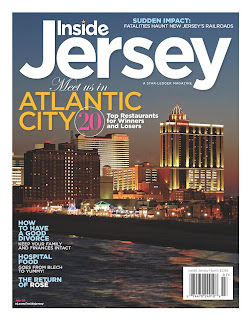 The most widely circulated newspaper in New Jersey is the Star-Ledger. Recently the paper initiated a monthly magazine, Inside Jersey, which is distributed to all paper subscribers and is available also by regular subscription. The July issue of the magazine begins what will become a monthly feature, a spotlight on a NJ writer or artist. I was delighted when several months ago I was invited to be the subject of the first such feature. I submitted five poems, two of which were selected. Both "A Murmuration of Starlings" and "Stripping the Lemon" appear in the current issue of Inside Jersey.

One of my missions in life is to widen the audience for poetry. Most publications of my work make me happy, but this one especially pleases me as the magazine will reach many people who might not otherwise read poetry. I hope they'll linger for a while with my poems and perhaps think they might like to try some more poetry.

"A Murmuration of Starlings" makes reference to something that happened recently in a nearby community and received quite a bit of attention in news outlets. Apparently the starlings had become a problem in Franklin Township, so the decision was made to poison their feeding spots. The unwitting birds ate the poisoned seeds, flew away, and then died mid-flight. I read in the paper that the mayor said, "It was raining dead birds." That line, that image, haunted me and shortly thereafter became the poem.

"Stripping the Lemon" I began last summer in an all-day workshop with Dorianne Laux and Joe Millar. Participants were asked to bring along some interesting object. I brought a print-out of a painting by artist Jeff Hayes. "Strip-tease" struck me as a very sexy image of a fruit. It seemed metaphorical. That metaphorical aspect generated the poem, a comparison between peeling the lemon and stripping off one's clothes. I had a really good time shaping the poem. I wanted to capture in my lines the sinuous curves that Hayes captured on his canvas. So once I felt that I had the words right, I labored over the shape. It took me hours to get it just right, but in the end I was pleased with the results. 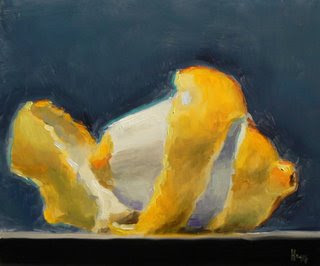 Posted by Diane Lockward at 1:30 PM