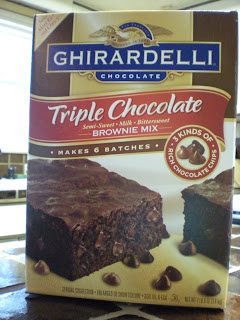 Like Seinfeld's Kramer, my husband loves the Price Club. And like Kramer, he tends to overbuy when he goes there. Recently I asked him to pick up a box of Ghirardelli brownie mix. He came home with the above pictured box. I have enough brownie mix to last a few years. But maybe not as these are without a doubt the absolute best brownies. I will never again bother to make brownies from scratch (not that I have in recent years) as these are better. The particular mix I have (there are others) contains three different kinds of chips. The brownies are sweet, gooey, fudgy, and loaded with chips.

I have just two problems with the brownies: 1) I can't stop eating them, and 2) I always seem to burn them just a bit around the edges. I know you can't help me with the first problem, but can anyone recommend a pan that eliminates the overdone edges problem?

Anyhow, for some reason this large box of brownies got me thinking about excess in poetry. I remember hearing Mark Doty at a Dodge Festival say that he's a "more is more kind of poet." I know that Doty is sometimes criticized for going on too long, for being too expansive, and yet it seems to me that while his poems are often long they flow seamlessly. Generous and lavish and gorgeous. I recall Doty also saying something about reaching that point where he thinks the poem is over but then instead of stopping, he asks himself what more could be said and he keeps on going.

I tend to blab on too long in my poems, so my revision work is often a matter of trimming off the overdone edges. When I feel that a poem hasn't found its real subject, I write out in the margins, then often import that material into the poem. But then I also cut out some stuff. I seem to focus more on cutting than on expanding. I'm trying to think of some other poets who are expansive without being long-winded and flabby. Any suggestions?

I'd like to offer you some brownies, but here's a delicious poem by Mark Doty instead.

Clear sac
of coppery eyebrows
suspended in amnion,
not one moving–

A Mars,
composed entirely
of single lips,
each of them gleaming–

this bag of fish
(have they actually
traveled here like this?)
bulges while they

acclimate, presumably,
to the new terms
of the big tank
at Fish R Us. Soon

they’ll swim out
into separate waters,
but for now they’re
shoulder to shoulder

in this clear and
burnished orb, each fry
about the size of this line,
too many lines for any

bronzy antique epic,
a million of them,
a billion incipient citizens
of a goldfish Beijing,

a Sao Paulo,
a Mexico City.
They seem to have sense
not to move but hang

fire, suspended, held
at just a bit of distance
(a bit is all there is), all
facing outward, eyes

(they can’t even blink)
turned toward the skin
of the sac they’re in,
this swollen polyethylene.

And though nothing’s
actually rippling but their gill,
it’s still like looking up
into falling snow,

if all the flakes
were a dull, breathing gold,
as if they were streaming
toward–not us, exactly,

but what they’ll be . . .
Perhaps they’re small enough
–live sparks, for sale
at a nickel apiece–

that one can actually
see them transpiring:
they want to swim
forward, want to

eat, want to take place.
Who’s going to know
or number or even see them all?

They pulse in their golden ball.

Posted by Diane Lockward at 2:27 PM