I Do a Good Deed 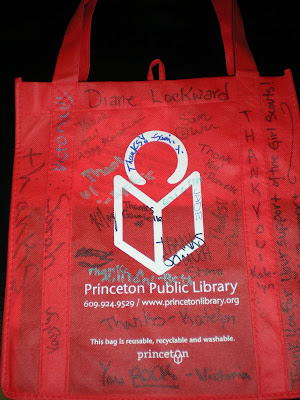 A few months ago I received an email from a high school junior named Izzy, an Ambassador Girl Scout. She was working on a big-time badge, the Girl Scout Gold Award, the highest achievement in Girl Scouting. Her project was a community service one called “The Written Word Sleepover Workshop,” a two-day event that focused on the proverb, “The pen is mightier than the sword.” The event took place at the Princeton Public Library which is 50 miles from my house. The girls who participated slept overnight in the Library which they had all to themselves.

In designing her project, Izzy's goal was to give young girls in fifth to eighth grades the tools they need to facilitate social change in a peaceful and effective manner: through writing.

The project will culminate with a book of the stories, plays, and poems written by the girls during the workshop weekend. The book will be distributed to libraries and congressional offices nationwide "to ensure that the attendees’ voices are heard and that other young people across the country are inspired to write for what they believe."

Izzy's resourcefulness was revealed early on as she set about locating authors. I don't know how she found the others, but she found me via an online search. When she learned that I work as a poet-in-the-schools, she decided to invite me to participate. I was joined by two playwrights and a fiction writer.

My job was to give a brief reading to a dozen 5th and 6th grade girls. Although I'd initially been asked to read poems that had some kind of social message, when I learned that all my girls were that young, I decided to read poems about the lives and family relationships of girls. I read one about my grandmother, another about my mother, and one about my daughter. Then I met one-on-one with each girl to offer some feedback on the poems written during the program.

I was happy to participate in Izzy's project as I was so pleased to see someone design a project around writing. Also, I hope Izzy is right when she suggested that I would be contributing to a "workshop that promotes nonviolent protest and that fosters the communication skills of tomorrow’s leaders."

There was no remuneration for my participation, but I was presented with the bag you see above, an "earth-friendly" bag, signed by each of the girls. Note the note at the bottom: "You Rock." Indeed I do. A box of Thin Mints would have been nice, but I was nourished in other ways.

Posted by Diane Lockward at 2:37 PM