This Saturday's reading, "Girl Talk: A Celebration of Women's History Month," was wonderful. When I organized this event last year, I thought it would be a one-time thing only. But my local library wanted to host it again, and many people asked to have it back. So I used the same format, sent out invitations to a few dozen women poets, and let the pieces fall into place. Some of last year's poets read again; some of the poets were with us for the first time. I wish I could include everyone, but that's not possible. We ended up with 28 but had 3 cancellations due to illness.

I asked each woman poet to read one woman-related poem. Nobody gave a long speech. Nobody hogged the floor. There was no male-bashing. Instead, this was truly a celebration of womanhood, of sisterhood, of poetry. We heard poems about grandmothers, mothers, sons and daughters, husbands. We heard a poem about sending off a son to serve in the military on foreign soil. We heard a poem about going back home after years of absence. We heard a poem about the fear of falling. We heard funny poems and poems that wrenched our hearts. Some poems did both.

We had a fantastic audience. The room holds 80 and it was full. Many were returning from last year. Some were new. There were a few people who'd never been to a poetry reading before. They plan to go to more. One poet-listener from Princeton brought her childhood girlfriend who turned out to be the sister of my childhood girlfriend who was my blood sister! One woman drove two hours from Connecticut to be with us. One poet-reader brought her 10-year-old daughter who'd selected the poem she wanted her mother to read.

After the reading we had a tea party with lots of delicious homemade cookies baked by the poets who volunteered to bake. We sold some books, though not as many as last year, I'm guessing as a result of the economic conditions. 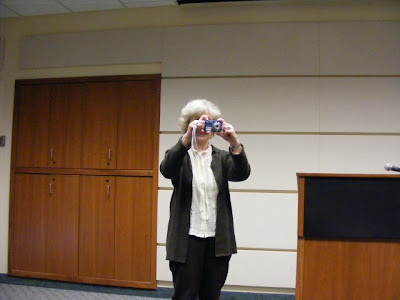 Picture of me taking a picture of the crowd. Photo taken by Anthony Buccino. Click the link to see a slide show of the poets. 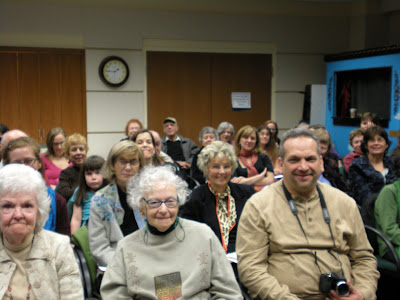 Picture of the crowd. Isn't this a beautiful sight, to see all those chairs filled? Front row is Anthony Buccino with his trusty camera. Third row back is the afore-mentioned 10-year-old girl with her mother, poet Nicole Cooley.

Posted by Diane Lockward at 4:33 PM