The Poet on the Poem: Susan Laughter Meyers

I am happy to feature Susan Laughter Meyers as my guest on The Poet on the Poem. I am confident that you will enjoy her poem and her comments about it. 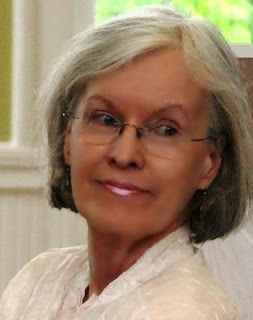 Susan Laughter Meyers is the author of My Dear, Dear Stagger Grass, released in August 2013 as the inaugural winner of the Cider Press Review Editors Prize. Her first book Keep and Give Away (University of South Carolina Press, 2006) received the South Carolina Poetry Book Prize, the Southern Independent Booksellers Alliance (SIBA) Book Award for Poetry, and the Brockman-Campbell Book Award. Her chapbook Lessons in Leaving (1998) won the Persephone Press Book Award. Her poetry has been published in numerous journals, including The Southern Review, Prairie Schooner, and Crazyhorse, as well as on the online sites Poetry Daily, Verse Daily, and Ted Kooser’s American Life in Poetry column.

When the wind gets up and the water rises,
those who live on higher ground, at a distance
from the pinched smell of pluff mud,
from spartina marshes and swamps of cypress knees,
upland from the tannin-black tributaries
where through the bottoms, among the wet-footed
spider lilies, one barred owl
calls another, one to the other till there’s little left to say,
upland from the cottonmouth and the brown water snake
coiled and rooted by the tupelo
and the alligators logging across the slough,
upland from the deer hound pens full of yelps—
full of naps and pacing, full of cedar-thicket dreaming—
and the dirt yard’s milling of gray cats
and striped kittens yawning by the palmettos,
upland from the sea sky sea—the horizon
a fine line polished away—
from the shrimp boats shrinking smaller and smaller
on their way to their serious work of gathering,
from the smooth, quick balancing act
of the sun—heavy and orange—riding the waves,
upland from salt myrtle and the season’s second growth
of trumpet honeysuckle, those who live at a distance
from the band of quick, dark clouds blooming at sea,
upland from the bang and whirl, clatter
and shake of the wind when it’s up,
those who live on higher ground ask
of those who live by the flats and shoals,
the shallows and bogs, Why, and again, Why, O why.


DL: The diction in your poem is wonderful, e.g., pluff mud, spartina marshes, wet-footed spider lilies, salt myrtle, trumpet honeysuckle. How did you acquire all these succulent words? Did they appear in your first draft or did you add them to the poem during revision?

SLM: From the poem’s inception I knew during the whole process of writing it that I would be knee-deep in language and sound. Just now I went back to look at the first draft—there were twenty-six drafts—and from the start the poem included image after image from the natural world; but of the ones you pointed out, only the trumpet honeysuckle was in the first draft. By draft three, though, the pluff mud and spartina marshes were there, as well as the spider lilies—though they weren’t wet-footed yet. So it was an early, but gradual, process—the accretion of language and imagery—and it’s a boon to us poets that the names for native flora and fauna are rich in sound.

DL: I very much admire the way you've succeeded in animating the setting. Tell us how you created the sense of motion and energy that pervades the poem.

SLM: I wrote the poem not long after the active hurricane season of 2005, the year of Hurricanes Katrina and Rita among others. So the sheer energy of the storms was still with me. Despite the danger from hurricanes, the love for the lowlands and the wild beauty there persisted in my mind. More than once I’ve been in the situation of whether or not to evacuate—and if so, when—and it’s hard to leave, despite the danger. In the poem I wanted to show the attachment to the land, to a way of life, to the wild and even the less-than-beautiful aspects of the coastal plains.

Most of the images that came to mind as I was writing have their own motion of some kind—the snakes and alligators, the owls, the shrimp boats at work—that energy plus the force of the wind in the poem, always the wind—well, all of these, together with the fear, attachment, and uncertainty stirred up by the storm at hand, contributed to my own sense of agitation and unrest. And I hope that the swirling energy was conveyed.

DL: One of the feats of this poem is its syntax. How difficult was it to get one long sentence to sustain the entire poem? Tell us, also, about the function of the dashes.

SLM: I love what syntax can do in a poem, its ability to indicate not just sequence but also hierarchy and relationships, its role in manipulating the rhythm and pacing. Syntax is truly like a conductor leading an orchestra. Because “Coastland” consists of a sustained list, it felt natural for it to be one long, convoluted sentence. I wanted the movement of the poem to be somewhat like a spring that uncoils, a movement that seemed fitting for a poem of wind. As you can tell, too, I’m fond of dashes. I often use them to interrupt myself or to set off an explanatory phrase, sometimes for the extra-long pause that I’m aiming for. Other times I use them because I’ve already used commas, and further commas to set off the phrase or clause would simply be confusing.

DL: Your use of anaphora is hypnotic and all the more impressive because it occurs within one long sentence. The repetition of "upland from" and "from the" scattered throughout the poem adds speed and intensity. How did you decide how much was enough and not too much?

SLM: I did play around with that as I revised, but actually the frequency of those repetitions settled in sooner than I expected, probably because I kept reading the poem aloud. That’s the only way I can make those sorts of decisions, to hear the rhythms and patterns sounded out in different ways. While I’m reading my poems aloud, I hold my hand up close in front of my mouth as I read so that the sound bounces back to my ears. Then, and only then, can I begin to tell what is and isn’t working.

DL: Although there's no end rhyme, you make the poem sing with other sound devices—alliteration, assonance, consonance, and monosyllabic words. Tell us about the craft decisions that resulted in the poem's music.

SLM: I try to follow sound whenever I can. Thus, when I make diction choices, they’re often based on sound. The more I do this, the more it becomes natural to me. As a result, my ear is becoming more attuned to sound patterns. Reading the poem aloud comes into play, too. One example from the poem is those spider lilies mentioned earlier. In an early draft the image focused on “the spider lilies’ white thin stars,” referring to the narrow-leaved white flowers of native spider lilies that grow in swamps and along the edges of rivers. I liked the description of the flowers, but the image didn’t seem to do anything for the sound and rhythm of the poem. Eventually the wording became “the wet-footed / spider lilies,” which meant a loss of the flowers as stars but a gain of the rhythm and sound repetition in “wet-footed.” That’s the kind of change I’ll make for the sake of a poem’s music.

My reading directly affects my craft decisions, too. I seek out poems by other poets that are musical, hoping to learn from them. There are so many decisions to make! Thank goodness, many of them are ones we’re not even conscious of when we make them. Some of those good, unnoticed decisions derive from the bones of our writing practice—and old failed poems.

Readers, please listen to Susan's reading of her poem.