The book launch reading for The Crafty Poet: A Portable Workshop was held on Sunday, November 10, at the West Caldwell Public Library. We had a perfect day for it and a heart-warming turnout. A total of seventeen poets came to read. Here are some photos, in the order of the reading. I used the structure of the book to structure the reading. 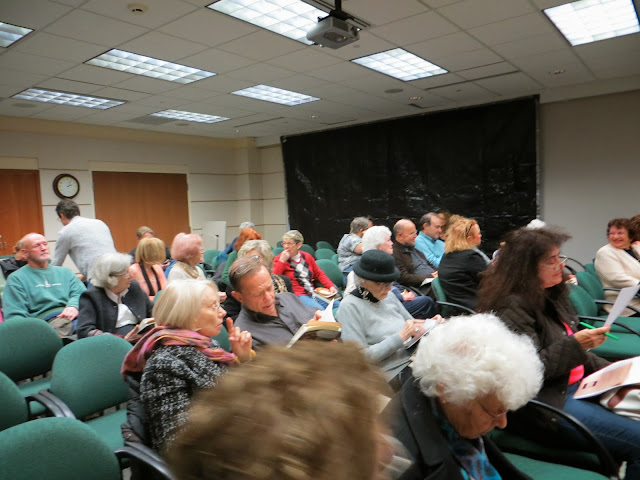 This is an early picture of the audience arriving. We had 52 people for an afternoon of poetry. 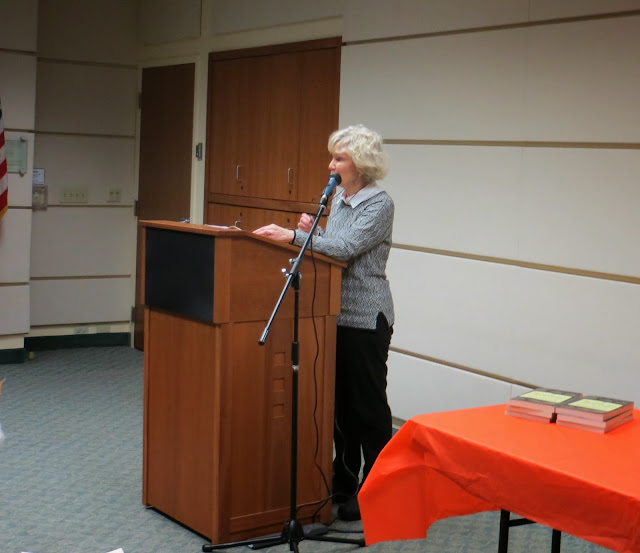 This is me, Diane, welcoming the audience and introducing the book. 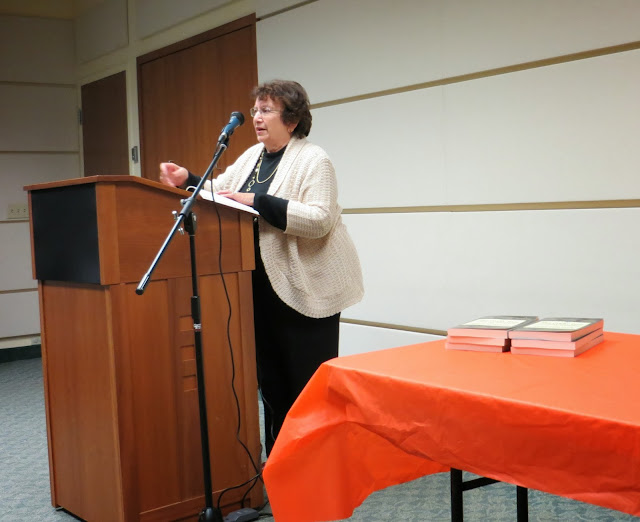 Susanna Rich reads "Radish," a sample poem written to the prompt that accompanies
Rod Jellema's "Because I Never Learned the Names of Flowers." Susanna later also read
"Gassing Up in New Jersey, Just Before Midnight." 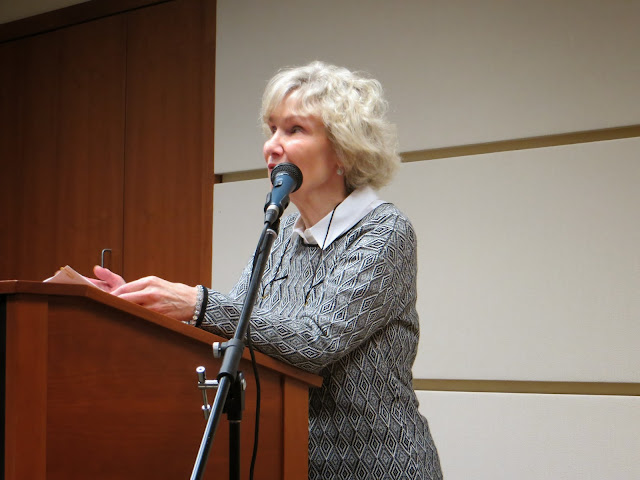 Me talking a bit about my Craft Tip, "Finding the Right Words." (I seem to be looking for them
on the ceiling.) 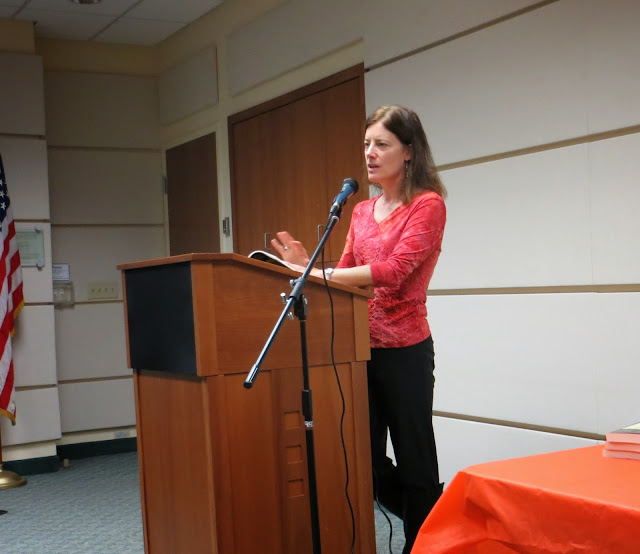 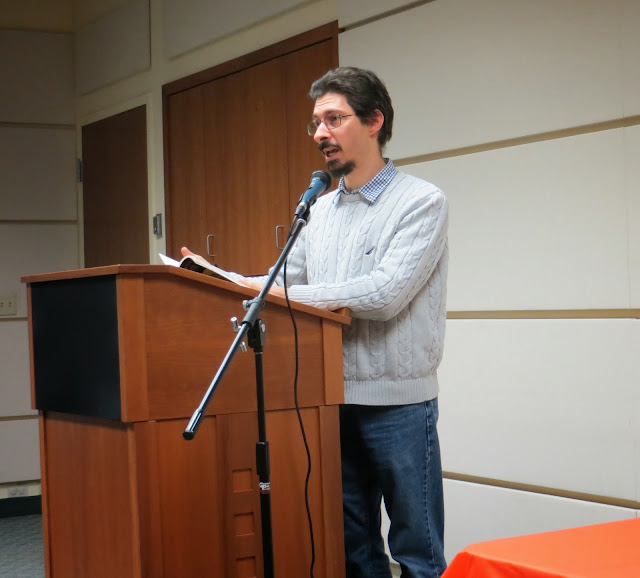 Michael T. Young reads "Advice from a Bat," a sample poem written to the prompt that
accompanies Amy Gerstler's model poem, "Advice from a Caterpillar." 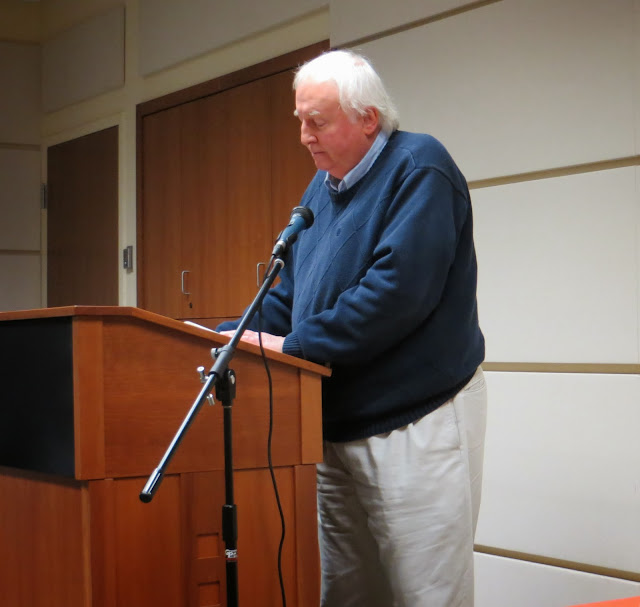 Section III. Sound
Sandy Zulauf reads "Doctor Poets," a sample poem written to the prompt that accompanies
Suzanne Zweizig's model poem, "American Supermarket Idyll." Sandy will present his poem
and the book as a gift to his doctor on his next visit. 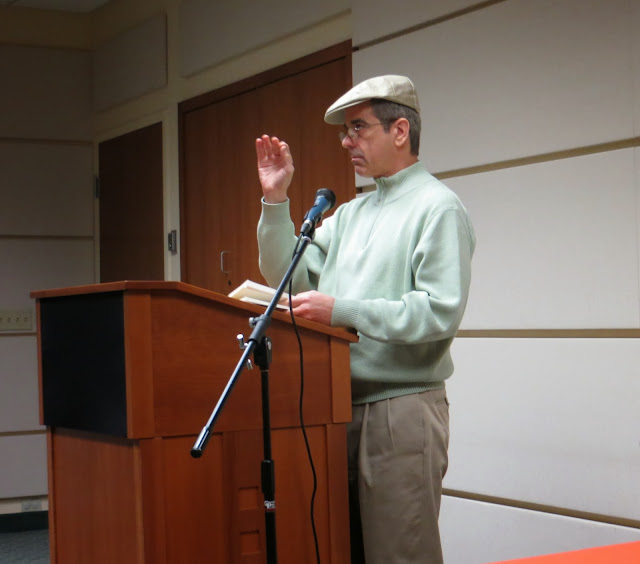 Section IV. Voice
Joel Allegretti reads his acrostic poem, "In a Station," a sample poem written to the prompt
that accompanies Jeanne Marie Beaumont's acrostic, "After." 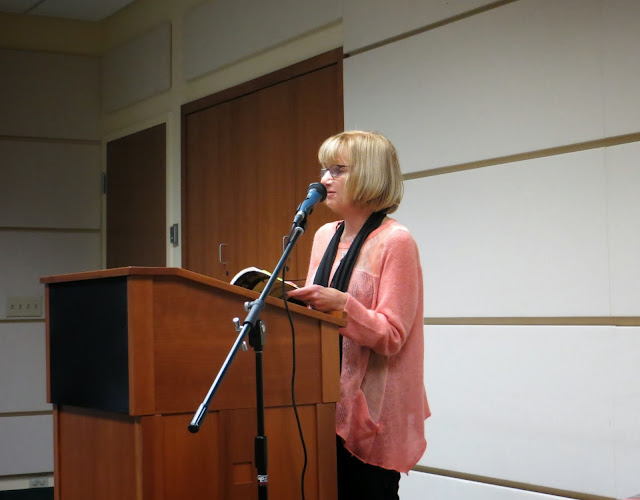 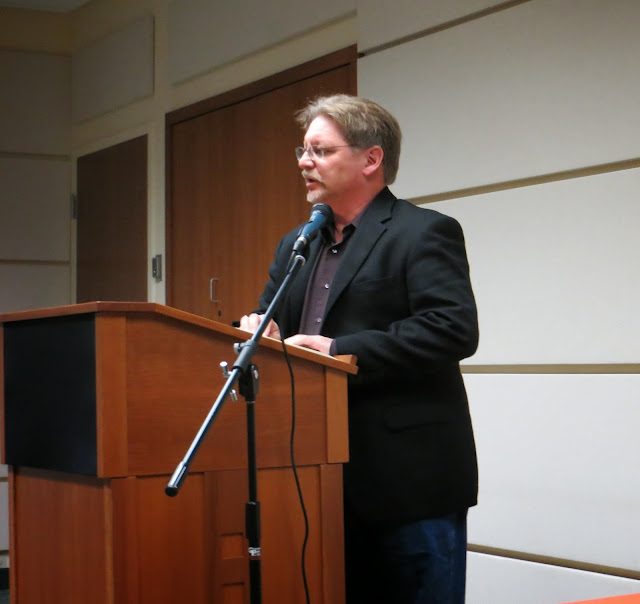 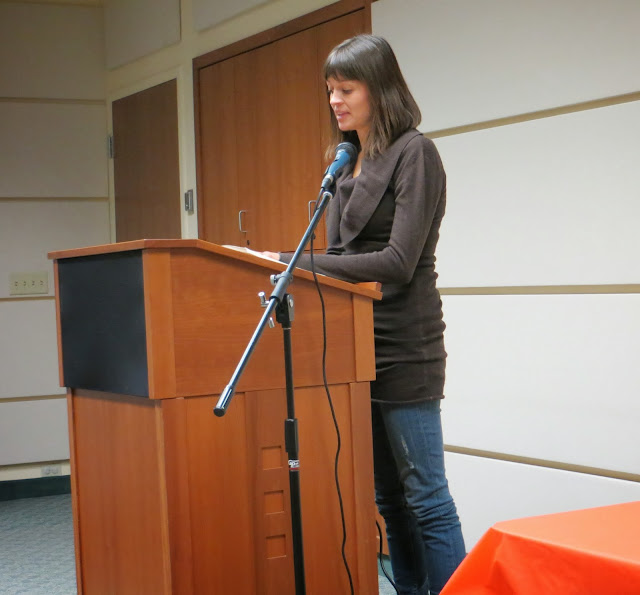 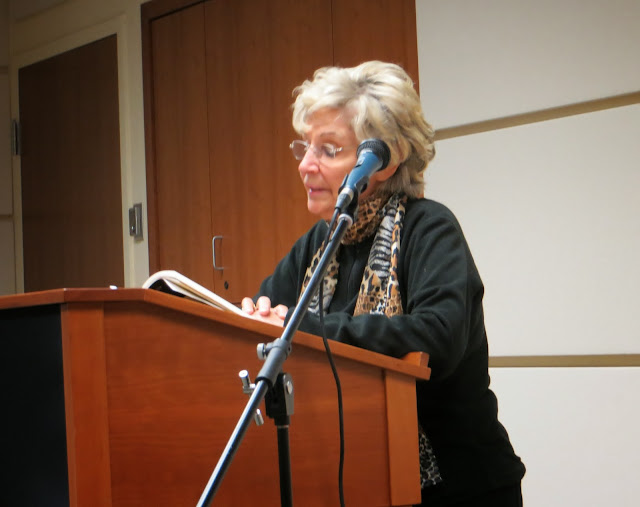 Wanda Praisner reads "After Love," the sample poem she wrote to the prompt for Bronwen's poem. 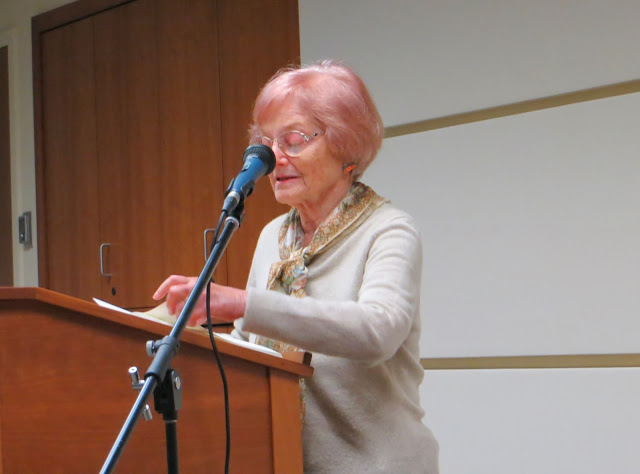 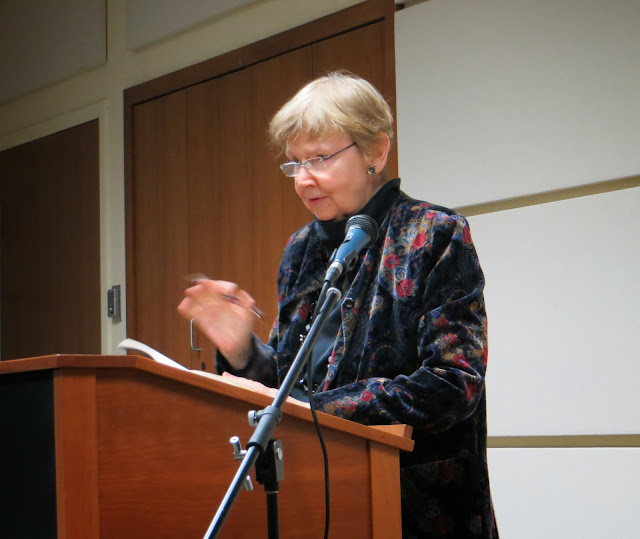 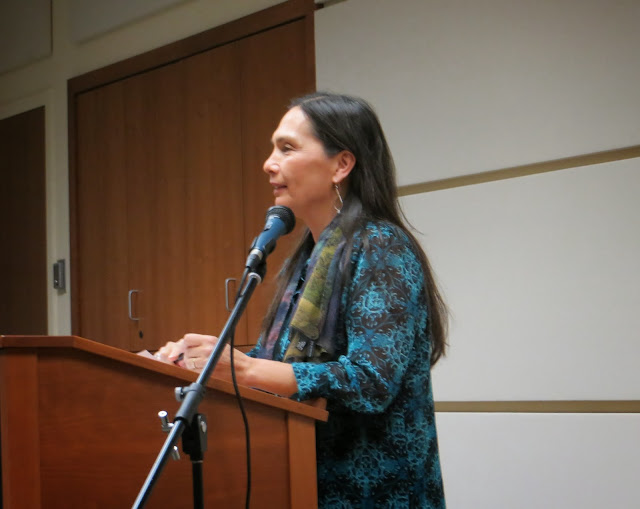 Section VII. Syntax
Delaware Poet Laureate JoAnn Balingit discusses her craft tip, "The Promise of Syntax,"
and then reads one of her poems illustrating a syntactical device. 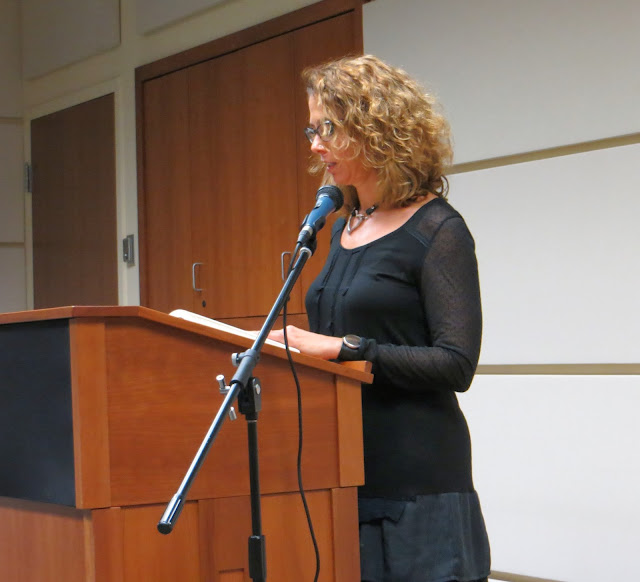 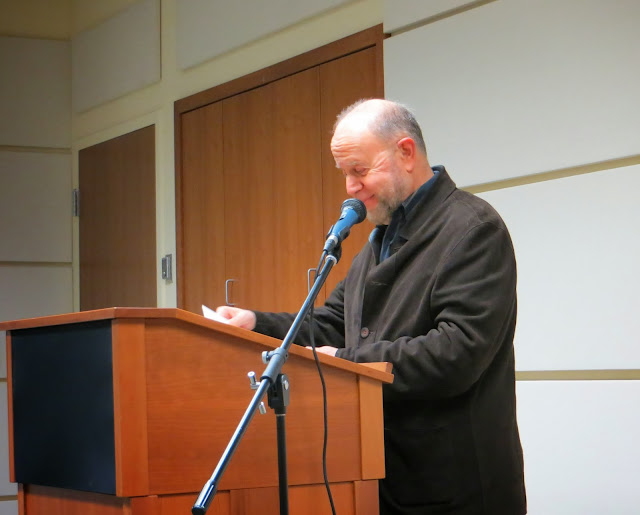 Basil Rouskas reads "Scents of Summer," a poem that he wrote using the prompt
based on Marie-Elizabeth's poem. 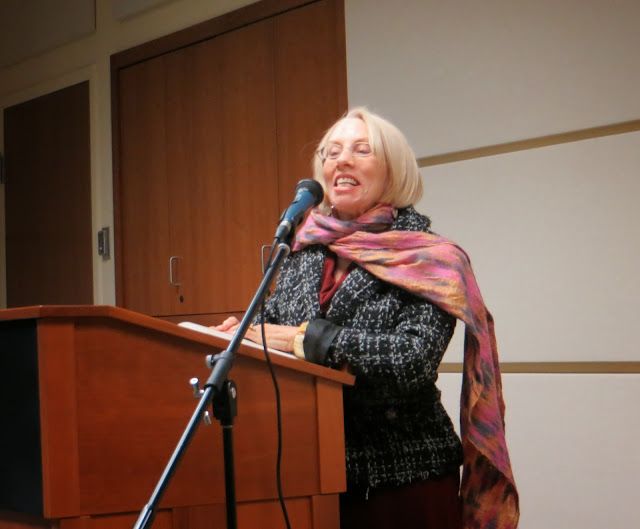 Section X. Writer's Block / Recycling
We didn't have any poets present for this section, but we hope we sent everyone home
with lots of enthusiasm for revising poems and writing new ones.

Following the reading we had a reception with homemade cookies made by me—brownies, white chocolate chip and chocolate chip cookies, toffee delites, date nut bars, and lemon love notes. While people munched and talked poetry, I signed books which felt like a perfect way to end the party.

The Crafty Poet is available HERE.

Posted by Diane Lockward at 3:02 PM