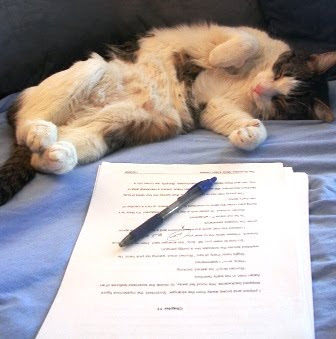 I've already said in a previous post that I like contributors' notes for several reasons. I like to know a bit more about the poets whose work has interested me. If a poet's work has really grabbed me, I might be inclined to buy that poet's book. It helps if that information is available in a note. So including notes can help readers decide which books to buy and help poets get some book sales. That's good for all of us.

1. I like to find a reasonable number of previous journal credits. I think 3-4 is ideal. More than that starts to look like bragging. Over 5 looks like desperation. Don't do it. I also think it's a bad idea to include forthcoming journal publications. After all, if someone looks at this journal in a year, those forthcoming poems will already have come forth. General rule of thumb: The longer the bio, the less impressive it is. Err on the side of brevity.

2. Now here's my main pet peeve in a note: Bean counting! For me, it's a major turn-off when the poet specifies the exact number of poems he or she has had published in the exact number of journals and anthologies. This is really unattractive, braggadocious, competitive, and amateurish. If you feel inclined to add this information, lie down and don't get up again until the urge passes. Likewise with specifying the number of Pushcart Prize nominations. It's nice to get some of these, but beyond a certain number, you start to look like a loser. Bridesmaid syndrome.

3. I am interested in the books you've published, but if you've published many books, just list the most recent. (For books, I'm happy to know about forthcomings. A foolish inconsistency?)

4. I always cringe a bit when I come to fat words like "widely" or "extensively." Err on the side of modesty.

5. I'm vaguely interested in where the poet lives, but I'm not especially interested in who he or she lives with. I do not care one whit about the animals that reside with the poet. Too cute. You've got a chocolate Lab? Nice, but that doesn't affect my response to your poetry.

6. I am interested in any significant prizes won. But don't go overboard here.

7. I'm interested in your occupation but probably not your hobbies unless they're really cool. (I'm betting a lot of people, though, would reverse this.)

9. I don't care where you went to school or what degrees you earned. And I really, really don't want to hear about who you studied with. You may have studied with the late William Matthews, but that does not convince me that you are his equal. Your poems will do that.

10. I also dislike reading that your manuscript, Such and Such, is in search of a publisher. Try Craig's List. Or do what every other poet does, i.e., send the manuscript out to publishers.

So those are my likes and dislikes. What are yours?