Using Audio to Spread the Word 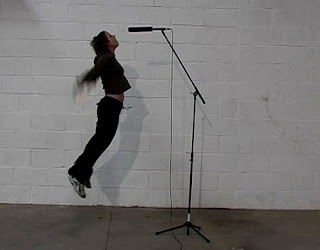 I've recently become increasingly interested in the various ways that poets might use audio and video production to put their poetry out into the world. If you can't get to California to give a reading, how about bringing California to your website or blog where you've posted some podcasts and videos? After all, historically, poetry is an oral art form. How hard do we work to get music into our lines? And yet, most often we encounter poetry only on the page.

So I was really pleased to get the new Poets & Writers and find an article, "The Audio Revolution," by poet Todd Boss, whose first collection, Yellowrocket, was published by Norton in 2008. Todd's thesis is that while we have at our disposal many ways to quite easily make our poems available in audio forms we continue to rely almost exclusively on print forms, a practice that Todd sees as outdated and not in our best interests. With the internet and its limitless audio opportunities, we could reach a much wider "listening" audience. He suggests that we follow the model used by musicians. By the way, although this article focuses on audio, I think the same points apply equally well to video presentations. In fact, many of the examples Todd points us to combine audio and video.

Todd has a cousin who is a musician, so he used him and his studio to get started. If you visit Todd's website, you'll find examples of his audio and video recordings. When Todd's manuscript was published by Norton, review copies were sent out with CDs featuring some of the poems. What a great way to get people interested in your book!

Todd has since worked with other musicians and has given several readings accompanied by musicians. I've long been wishing that more venues would combine poetry with music. One reading I especially enjoyed giving was at Northampton Community College in Pennsylvania where I was booked along with jazz musicians, Nancy and Spencer Reed. I'd like more of those! Todd also points out that musicians tend to get paid more often and just plain more than poets get paid. True again—Northampton remains one of the best-paying readings I've had.

The article also provides a number of online sites for readers to visit. One is Motion Poems where audio files have been combined with animated videos. Although the article suggests that you might have the same thing done with your poems, the site has only 6 videos posted—5 of them by Todd and one with a poem by Major Jackson. And there's a note that poems are taken by solicitation only. Nevertheless, the site is worth a visit to see what can be done.

Todd also provides some of the technical information you might need. Most new computers now come with the capacity to make audio and video. If you're not satisfied with your computer's audio, Todd suggests a few inexpensive microphones. He also recommends a call-in site, drop.io, where you can phone in or upload audio files that will be hosted at the site. I know that gcast.com provides the same service but no longer offers the phone-in option for free. This site appears easier to use, but drop.io also appears to offer storage space for video and web pages as well. If you have a poem in an online journal and that poem is about to disappear, you can preserve it at this site.

Finally, Todd does not suggest that audio options will replace the printed page, but suggests that they can be used to supplement the printed page. Makes sense to me. So now I'm working on a few practice videos with audio.

Posted by Diane Lockward at 3:11 PM