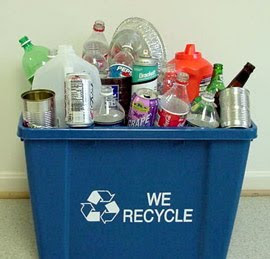 I'm talking about recycling your writing. I love it when I get a piece published and then later reprinted somewhere else. Getting that extra mileage is especially gratifying if the first publication source had a limited circulation or hit a distant part of the country. I also like to go from print to online and the other way around. Of course, opportunities to republish poems in journals are very limited, and I find that the number of journals that do republish tend to be, well, not so hot.

My favorite way to get a piece back into circulation is anthologies, maybe because I really like anthologies. I'm fussy, though, about which proposed anthologies I send to. I've had several experiences where I've submitted, had the poem or poems accepted, then waited and waited, only to learn that the project wasn't going to fly. Not much lost since the work had already been published. Still, it's annoying. So for the most part, I submit only to anthologies that already have a publication agreement or ones whose editors solicit my work.

My earlier blog post on obsession was originally written a few years ago in response to a call for brief essays on that topic. Each essay was to be accompanied by a poem that illustrated the obsession. Cool idea for an anthology! I wrote the piece, added the poem "Organic Fruit" which had previously been published in the Seattle Review, and sent in my submission. It was accepted. Then I waited. And waited. Queried and was told things were moving slowly, but moving. Many months later it became apparent that the two editors had never even gotten as far as completing their proposal. The project died. One dead essay. But the poem was reprinted in the 2009 Alhambra Poetry Calendar.

Then back in April another blogger invited other bloggers to guest blog at her site. I dug out the essay and the poem and sent them to her. She posted them but could not get the poem formatted correctly. Obviously, that's a poem where format is critical. We went back and forth a few times, but she just couldn't get it right, so I eventually asked her to just delete the post. Essay died again.

Then a few weeks ago Red Room invited their blogging members to post on the topic of obsession. They would then select a handful to feature. So I again dug out the essay and posted it there, but without the poem as I didn't think the poem would format correctly there. My piece was one of ten featured. Nice. Then I thought, hey, why not get a bit more mileage out of this piece and repost at this site. So that's the history of that bit of recycling.

Another kind of recycling that I like is when a poem of mine appears somewhere and some bloggers find it and post it at their sites. I know that not all poets like that. Some are offended if they are not first asked for permission. I don't mind at all as long as the reposter doesn't butcher the poem or mangle my name. Really, I think recycling is cool. What do you think?