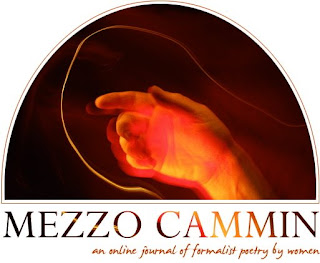 The new issue of Mezzo Cammin is now online. This journal is devoted to formalist poetry by women. It evolved out of a critical seminar led a few years ago by Marilyn Taylor at the West Chester University Conference. I was one of twelve participants. Our topic was undervalued women formalists. We each chose one poem by each of two such poets and wrote a critical essay. It was a wonderful experience and out of the lively conversation that took place came the idea for the journal, beautifully ushered in by Kim Bridgford who is its editor.

While I don't consider myself a formalist poet, from time to time I enjoy working with forms. I have a particular interest in invented forms. I have two poems in this issue, both invented forms. The first one, "The Very Smell of Him," is a syllable count form. (I'm embarrassed to say that I can no longer remember what the exact name of this form is. Help?) The first line is 9 syllables, the next is 8, and so on down to 1 so you end up with a 9-line poem. The second poem, "Onion," is called a niner—9 lines, 9 syllables in each line. The form, as far as I know, was invented by Ann Silsbee.

Barbara Crooker also has two invented form poems, the first an anagram, the second a sevenling.

And then there's a crown of sonnets, this one including 14 sonnets. What's unique about this crown is that it's a collaborative crown with sonnets coming from six different poets. There's also a critical essay by Kathrine Varnes about the collaborative crown.

Each issue of this journal also features the work of a different woman artist. This issue's artist is photographer Marion Belanger whose photos don't even look like photos. They're exquisite. The artist has also written an essay about her work.

So check out this issue of Mezzo Cammin.

Posted by Diane Lockward at 2:59 PM