What Blocks the Poems?

I read in the current The Writer's Chronicle that Dana Gioia, chairman of the National Endowment for the Arts for the past six years, will leave his position in January. He will then direct a new arts program at the Aspen Institute. This will be a half-time position. Gioia says that he achieved most of the goals he set out to do for the NEA, but now looks forward to more time for his own writing. Not that he hasn't been writing; he has been, just not poetry. He says that he has not published one poem for the past six years!

Reading that shocked me. Six years is a long time to go between poems. I get antsy and weird-feeling if I go six weeks without writing anything new. But I do often go those six weeks or more without any new poems. I don't like it, but I've kind of accepted that as my particular process. A period of activity followed by a period of no activity. I like to think of the fallow periods as a time of gathering, of observing and storing up new material that's just waiting for the right ripe moment to unleash itself on the world.

I realized as I read the article that something about the work Gioia was doing must have run counter to his creative urges. And I wondered about my own counter agents. It occurred to me that I've been in one of those do-nothing poetic periods. Recently, my husband was in Florida for five days and I had the whole house to myself. I cleared off the kitchen table where I do most of my writing. Each morning I sat there with a cup of ginger day and scribbled down something. All bad somethings. Not a poem materialized. It wasn't that I wasn't writing at all. I was. I wrote a substantial article and a book review. But my poetry brain was in shut-down mode.

Maybe the pressure of Christmas shopping? Knowing I ought to be at the mall pushing myself to the counter. How about you? What stalls you in your poetic tracks? What conditions need to prevail for the poems to come? Is it possible to cultivate those conditions?

Maybe if I'd looked out the window and seen something like this: 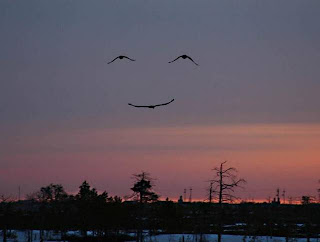 Posted by Diane Lockward at 2:03 PM

Email ThisBlogThis!Share to TwitterShare to FacebookShare to Pinterest
Labels: creativity