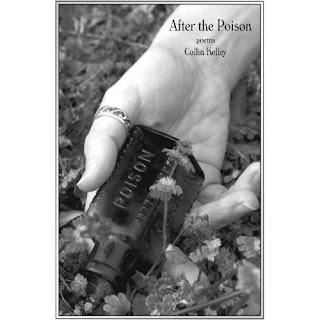 I'm interested in the various ways that poets manage to promote their work, something they really need to do if they want their work to find an audience. Certainly, the internet offers us some great opportunities, especially with the proliferation of audio and video possibilities.

Public readings are fun and probably the most effective way of promoting and selling your work, but not everyone can get to your reading. So if you can't bring the audience to the reading, is there a way to bring the reading to the audience? Poet Collin Kelley, author of After the Poison (Finishing Line Press, 2008), recently read at NYC's Cornelia St. Cafe. He has posted a video of his reading of one of the chapbook's poems, "Human Trafficking." Take a look and a listen:

Here's the text of the poem:

Human Trafficking
—BBC
In summer lull,
before the towers fall,
when crossing borders
is easy like sliding doors,
a torso washes up
at Tower Bridge,
no head or limbs, he's maybe seven
this delicate-chested boy,
stomach filled with quartz
and rough gold, the Thames
returning sunken treasure.

Three hundred black boys
have disappeared in London
as police determine this one
came from Nigeria
by the density of his bones.
From July to September,
they dissolved, slipped
through cracks.
No fibers, no fluids,
no grainy video images
of incandescent flesh
or flashing eyes.
Just gone.

This is called human trafficking,
African men and women
selling their own and whites
still eager to buy
at public auction,
souls now channeled
through air and wires,
transferred like a car title,
to wind up on some heap,
or stripped to shell.

One small boy, his homeland
a gene, his identity a mystery.
His missing face frozen
in someone's mind,
maybe a mother who sold him
for a few day's food,
or the white man who consumed him,
or the voodoo priest who beheaded him,
a sacrifice to drive the evil back to Africa,
a long reach and hunger quenched.

One small boy, 299 still missing.
They call this one Adam.


I love both the video and the poem. Isn't it wonderful to hear the poet reading his poem in his own voice, and, more than that, to see him holding his book and standing in front of an audience? Kind of makes you feel like you're right there.

I was happy to come across the video, both because I've been thinking about the value of videos to poets and poetry lovers and because I recently finished reading Collin's fine collection. These are very contemporary poems, written about current events, many of them—poems and events— dark and disturbing. But as in "Human Trafficking," the poems are written with equal measures of passion and craft. I like the way in this poem the poet intermingles the facts, what he knows, with what he can only imagine. Ultimately, he evokes not just a body but a boy, a real boy who once had parents, a home, and a name.

Now that you've seen the movie, go read the chapbook. You will find it disturbing and satisfying.

Posted by Diane Lockward at 1:07 PM