The following is the third in a series of brief interviews in which one Terrapin poet interviews another Terrapin poet, one whose book was affected by the Pandemic. The purpose of these interviews is to draw some attention to these books which missed out on book launches and in-person readings. 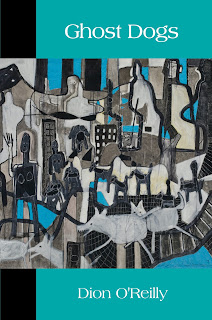 Geraldine Connolly: What central themes haunted you in the writing of this book?

Dion O'Reilly: The mind grappling with a world full of both exquisite beauty and also unimaginable evil pervades Ghost Dogs. I seek to balance these stark elements almost in the way a painter balances light and dark in chiaroscuro. I believe such juxtaposition of supposed opposites ignites the lyric moment, an experience of deep connection with the Living World. So I guess I would say connection haunts the book—how to connect, which, I think, might be at the heart of  lyric poetry.

A motif that emerged is the way animals function as inspiration and solace. I knew I wanted my book to be called Ghost Dogs because the entire arc of the collection reflects a haunting—the past whispering in my ear. I grew up on a ranch, isolated and often in peril: mastiffs, horses, pigs, fish, and raptors were a solace, a source of wisdom. This animal motif emerged naturally because, on the ranch, I spent more time with animal-animals than human-animals. As I say in my poem “Rivervale,” Herons lifted their great bodies from the streambed,/ shining fish caught in their beaks,and the agony/ twisting in the air made sense.

Gerry: The California landscape is very vivid in your work. How does the landscape of your childhood inform the poems?

Dion: Well, as I say, I grew up (and still live part of the year) in a beautiful place—the Soquel Valley, on an eighteen acre ranch with two streams running through it. So I write what I know. Portraying connection with The Living World is a theme I borrow from eco-poetry, and just another way to engage the lyric moment of connection. A landscape is a self-portrait; a self portrait contains a world.

For some reason, as a child, I was able to pay attention to The Living World, and it lifted my thoughts to a different plane. That kind of focus was redemptive, and I’m grateful. It’s the same process when I write, paying attention helps me transform. For example, early in the book as a child, I watch the heron’s prey—the fish struggling—but as an adult I identify with raptors. I admire their hunger and their agency:

The sun, a muzzle flash,
turning the meadow bright, burning
off the haze. I soar in, see it magnified,
everything itself only more so.

Gerry: Can you tell us about your writing process?

Dion: The most important tool for me is reading regularly. Reading all sorts of poets. I start my day, preferably before sunrise, with reading poetry.

Other than that, I would say that really looking at my life is key to my process: Ghost Dogs contains stories I carried for decades. The difficulty was in seeing the narratives differently. For example, writing about my sister led me to express a new compassion for her. I struggle not to be the heroine of the tale, not to write revenge poems, not to reinforce tired grudges or viewpoints. If the poem does not create a connective moment of insight, it doesn’t satisfy me, doesn’t provide the poetry fix I seek. I guess that’s what we call discovery, which is often the hardest part of the process. But that moment of discovery might be what makes a poem a poem. It’s a thrill

But sometimes I wonder what discovery really is cognitively. It might be a  moment where, suddenly, I see my thoughts at work, almost like meditation, a meta moment where I catch myself identified with my thoughts, rise above, and connect with a different Self—a moment where I say, This isn’t the same old story. It’s a song. It’s a sonnet. It’s a chant. It’s a moment where I did wrong. It’s not what I thought it was. It’s not the voice in my head anymore. We all have voices in our head, from childhood, from middle school, from MFA workshops. I would hope my process sees these thoughts, these running inner dialogues, and transforms them. My poet mind is like a kind adult shaking my suffering, self-involved, or just blithely unaware self and saying Hey, things aren't what you think they are!!!

Nowadays, I work less from my old narratives and more from prompts, word lists, rhyme, and form. I think that's a common evolution for poets. Still, word lists and prompts often excavate memories related to those in Ghost Dogs, but they force me to express them differently.

That being said, I write about whatever obsesses me. Whatever voices are in my head! I love to give myself that freedom and permission. It’s a kind of self acceptance. I think of the painter Chagall who never stopped painting flying goats and Russian villages. All the paintings are different yet the same. I don’t care if I write about the same thing for the rest of my life. The magic of poetry is that it’s a portal to infinite perspectives.

Gerry: Did you find it difficult to organize the book or did the poems fall easily into place?

Dion: Yes! I found it very difficult! Danusha Lameris, Ellen Bass, and Diane Lockward helped me organize Ghost Dogs. Ordering the book was its own discovery. I realized the poems traced my experience in a cohesive way I hadn’t seen before. The arc goes something like the following: reveling in the beauty of the Living World, the bad stuff that happened, the struggle that ensued, the redemption of adulthood.

Gerry: Do you think of yourself as a poet of the body? It seems that your work is so truthful about the body, both its suffering and its pleasures. Overcoming the suffering seems like a central concern, also you dare to write about the aging body in such a  frank and accepting way. I wonder how you came to this stance. Do you think of it as stoic?

It’s true my body has experienced extremes: the constant beatings as a child, enduring third-degree burns over most of my body, but life is beloved and joyous too with its many physical pleasures. I’ve had a lot of fun in my life and taken my body on many adventures! I just want to talk about it all. I don’t want to leave anything out. True sadness, for me, is to ignore part of my own experience.

I'm not afraid to talk anatomically about a woman's body, to break taboos or broach certain topics. I don’t understand why talking frankly about the aging female body, both its pleasures and its decay, is not a subject for polite company.

Maybe it’s because I grew up in such an isolated place, grew up in a barn as they say, I have always found it difficult to adhere to social conventions, so I’m just more open about my body. Dorianne Laux said of my writing, You're willing to say anything, and that can’t be taught. I agree, that at best, it’s difficult to teach a willingness to break silence. But whenever I read someone like Sharon Olds, Diane Seuss, Rachel McKibbon, Francesca Bell, Alexis Rhone Fancher, or Denise Duhamel, I see any subject is worthy of poetry. Singing the body electric has a long history in American poetry. It’s time for women to sing it too. Funny how people never stop being shocked yet intrigued by these violations of taboo. I guess that means we still need to talk about it.

I don’t know if I’m stoic. Maybe resilient is a better word. I think stoics suffer in silence, and I like to belt it out!

Two hundred pounds apiece,
with strong bodies, great black heads,
and sad, sagging faces, they were my companions
through the long years of childhood.
Mastiffs. Herds of them—
studs, a handful of bitches, scores of puppies.
Bored, in dusty clumps, they guarded the driveway,
pulling themselves up
onto oversized padded feet
to trail my horse through the hills,
then—with surprising speed—racing
up deer trails in futile pursuit
of coyotes or bobcats.

My friends risked stitches in their thighs
by knocking on the door,
and when the proud cars of boyfriends pulled up—
a gleaming ’68 Camaro, a convertible Bel Aire—
the pack ambushed them,
ferocious muzzles breathing steam,
drooling on the windows.

Now, all these years after leaving home,
I miss the dogs,
how formidable they were,
negotiating between me
and the world. I have
no silent creature at my side
to touch on her wrinkled brow,
no coiled animal to summon,
in love and ready to die.

Dion O’Reilly has lived most of her life on a small farm in the Santa Cruz Mountains of California. Her writing appears in such journals as The Massachusetts Review, New Letters, Sugar House Review, Rattle, and Bellingham Review. Her work has also appeared in a number of anthologies, including the Terrapin Books anthology A Constellation of Kisses. Her work has been nominated several times for a Pushcart Prize. An earlier version of Ghost Dogs was a finalist for the Catamaran Poetry Book Prize. She received her MFA from Pacific University. Ghost Dogs is her debut full-length collection.
website


Geraldine Connolly is the author of four full-length poetry collections: Food for the Winter (Purdue), Province of Fire (Iris Press), Hand of the Wind (Iris Press) and her latest book, Aileron, published by Terrapin Books in 2018. Her work has appeared in Poetry, The Georgia Review, Cortland Review, and Shenandoah. It has been anthologized in Poetry 180: A Poem a Day for American High School Students, Sweeping Beauty: Poems About Housework, and The Doll Collection. She has been awarded two fellowships from the National Endowment for the Arts. She has also received the Margaret Bridgman Fellowship of the Bread Loaf Writers Conference, a Maryland Arts Council fellowship, and the Yeats Society of New York Poetry Prize.
website