Here's the official list of the 2018 winners of the Pushcart Prize. The winners include poets, short story authors, and creative non-fiction authors. Many authors receive nominations, but as you can see only a handful win the prize, making it very special. Terrapin Books is proud of Lisa Bellamy who has won a first Pushcart for the press. Congratulations! 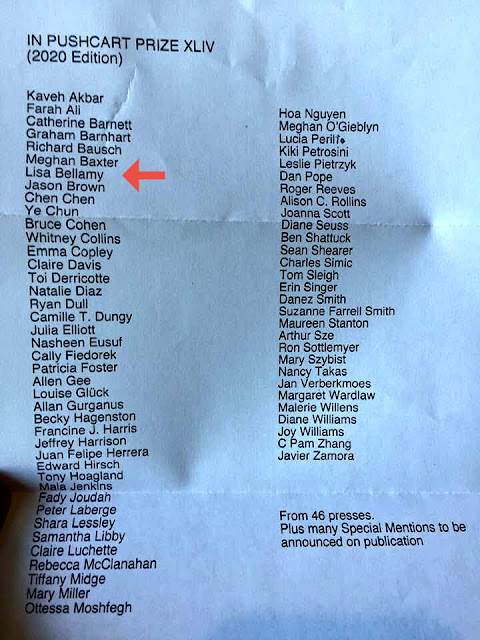 As a seed, I was shot out the back end of a blue jay
when, heedless, she flew over the meadow.
She had swallowed me in my homeland when she spied me
lying easy under the sun—briefly, I called her Mother
before I passed through her gullet like a ghost.
In a blink of God’s eye I was an orphan. I trembled
where I fell, alone in the dirt. That first night
was a long night, early May and chilly, and I remember
rain filled my furrow. I called out for mercy—
only a wolverine wandered by. I cursed my luck,
I cursed the happenstance of this world, I smelled
his hot stink, but he nosed me deep into the mud—
this was the gift of obscurity. I germinated, hidden
from the giants of earth, the jostling stalks,
the various, boisterous bloomers, and this was my salvation.
After seven days and nights I pushed through—
yes. Here I am, kissable: your tiny, purple profusion.