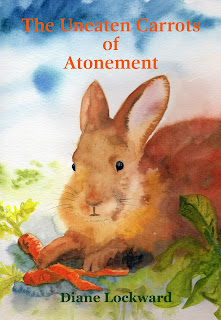 We all know that when you have a new book out a certain amount of promotion is necessary. That's certainly true for those of us with small presses, but it's also true for poets whose books are from larger presses. Several times I've had the experience of learning that a poet I know has a new book out—and that it's been out for months or longer. Why didn't I know that sooner? Because the poet never told me or anyone else. That's a big mistake, one that costs the poet a bunch of sales.

My new book, The Uneaten Carrots of Atonement, came out mid-February. Since I believe that if we poets want readers for our work we first need to let them know that it exists, I prepared a simple flier with cover image, one blurb, and Amazon link included. I sent the flier flying off to my email list.

Within a matter of days, the book sold out at Amazon. Good news, right? Should have been and in the past would have been. But for unknown reasons, my listing at Amazon then indicated that the book would ship in 1-4 weeks. Most people don't want to wait up to 4 weeks. I began to get emails from people telling me they'd deferred ordering or would buy the book when they next saw me. I assumed this was a temporary situation. It was. Soon the book was listed as "Temporarily Out of Stock," even worse. I called Amazon repeatedly and was told that books had been ordered and the listing would go to "In Stock" as soon as the order arrived. One Amazon rep even suggested that I tell people to order from B&N! Weeks went by. Finally, the listing went to ships in 2-3 weeks. Better but not great. Then several people told me that they'd actually received the book within a week. Not a bad wait.

I debated whether or not to send a second e-mail flier to let people know that they could now get the book at Amazon. Would that be pesty, overkill, obnoxious? Then I remembered several times when I'd received a second notice from someone else and was thereby reminded that I'd meant to order that book but had forgotten. I went ahead and ordered that person's book.

Also, in the weeks when my book was not listed as "In Stock," it had become available as an e-book. And the print book was being discounted 25% at both Amazon and B&N. So I had new news to include.

I went ahead and sent the second flier. I immediately began to get return emails. Oh no, I feared, this person is going to demand to be removed from my email list. But that didn't happen. Instead, some people thanked me for the reminder and said they'd just ordered the book. Others wrote notes of congratulations—worded in such a way that it was clear they had missed my first notice. One person wrote and requested a review copy.

So let people know your good news. And if you have a good reason for sending a follow-up note, go ahead and do it.

And by the  way, in the second note, I took the Amazon rep's suggestion and included a link to B&N.

Now as of today, my Amazon listing has finally, finally stopped showing the ships in 1-3 note. Progress. This morning it said Order Soon, Only 4 Copies Left, More on the Way. Definitely progress. And the book is now discounted at 28%. But I won't be sending a third note. That would feel obnoxious.

Posted by Diane Lockward at 2:33 PM

Email ThisBlogThis!Share to TwitterShare to FacebookShare to Pinterest
Labels: Amazon listings, promotion for poetry books, the uneaten carrots of atonement