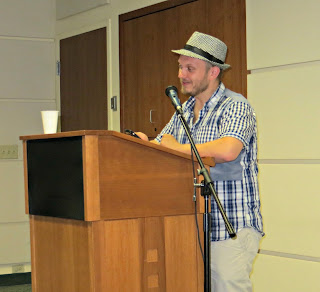 Charlie Bondhus’s second book, All the Heat We Could Carry, won the 2013 Main Street Rag Poetry Book Award and the Publishing Triangle’s 2014 Thom Gunn Award for Gay Poetry. Previous publications include How the Boy Might See It (Pecan Grove Press, 2009), and two chapbooks, What We Have Learned to Love—winner of the Brickhouse Books 2008-2009 Stonewall Award—and Monsters and Victims (Gothic Press, 2010). His poetry appears in numerous periodicals, including Poetry, Tupelo Quarterly, Midwest Quarterly, CounterPunch, and Cold Mountain Review. He teaches at Raritan Valley Community College in New Jersey and is the Poetry Editor at The Good Men Project.

All the Heat We Could Carry is a collection of poems written primarily in the voices of a gay soldier returning from Afghanistan and his civilian lover. The poems alternate between the battlefront and the home front, exploring, as they do, questions of masculinity, commitment, and violence.


Praise for All the Heat We Could Carry:
"All The Heat We Could Carry is a rare, brilliant and necessary book, offering a people who have lived well during the war a species of lyric night-vision, a camouflage night, wherein we are taught to field strip a rifle, but also to think about 'the soul, / a puff of wind / shot from the mouth.'" Our wars come home in these poems, through a prophet who’s seen hell, who now lives in the aftermath where all is refracted through the searing lens of wounded memory: 'the sun now heavy as a blood bag, where it is hard to tell / the difference between civilians and ghosts.' These poems move with precision from war to home and back, from stun grenade, body bag and bone saw to a garden in winter. If you want to know, or think you want to know, you must read Charlie Bondhus. If you want to know why, pay attention to the fifth section of his poem 'A Talent for Destruction.' Bondhus is a true poet, and this is among the best books I have read in a very long time."—Carolyn Forché

Earlier you had written me
about the roadside bomb’s
oranges, blues, and pinks,
which threw 200-lb men,
wearing 80 lbs of equipment,
into the hot, metal wall
of an Abrams tank.
When you came home in May,
I had a planter
of spiky bougainvillea on the porch;
the first thing you’d see,
a different kind of explosion.

We went to the bedroom
to tend to your body, starved
from fifteen months of hard living.
I smelled chemicals, felt shrapnel’s grit,
saw the places you had been burned.
You told me about the sliver
of metal lodged in your right calf,
bone deep, inextractable, that would not
affect your ability to walk or sit
but would always be there, much in the same
way there will always be war
someplace, affecting our lives.

Lying naked beneath the whup, whup
of the ceiling fan as you smoke
on the porch, I think about flowers and bombs,
the books I read on combat fatigue,
and wonder if this thorn in your leg
is attached to a stem that runs
the length of your spine,
exploding, in your head,
a white phosphorous bloom.

Please give Charlie's prompt a try:


Charlie has generously offered to have this Call for Submissions posted here. Check it out.

From Charlie Bondhus​ for The Good Men Project: People of all genders are warmly invited to submit poetry (simultaneous submissions AND reprints fine!) to The Good Men Project, a website dedicated to discussing what it means to be a good man in the twenty-first century.

On average, the site gets 3.3 million unique visitors and 8 million page views per month, and each published poem gets featured on the site for several days, so this is a very visible venue! Oh, and the poetry section is listed as one of the "Most Personable Poetry Markets" on Duotrope!

Work dealing with men or masculinity is a plus, though our first standard is simply high quality poetry.

Submit up to 10 pages of poetry, as an attachment, to charlie@goodmenproject.com.

Email ThisBlogThis!Share to TwitterShare to FacebookShare to Pinterest
Labels: all the heat we could carry, charlie bondhus, the good men project, west caldwell poetry festival