R.G. Evans, aka Bob, was one of six featured readers at the 2015 West Caldwell Poetry Festival. 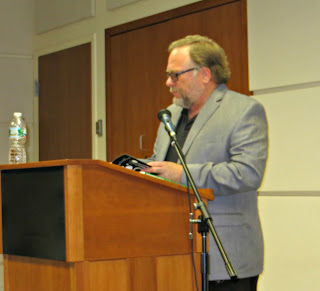 R.G. Evans' first collection, Overtipping the Ferryman, received the 2013 Aldrich Press Poetry Prize. His poems, fiction, and reviews have appeared in Rattle, The Literary Review, Paterson Literary Review, Lips, and Weird Tales, among other publications. His original music was featured in the 2012 documentary film All That Lies Between Us. He teaches high school and college English and Creative Writing in southern New Jersey.

Overtipping the Ferryman is a collection of poems ranging from the dark to the darkly comic. Themes include mortality, the art of poetry, grief and loss, and the natural world. Most of the poems are free verse, but the book includes formal poems such as sonnets and a villanelle as well.

Praise for Overtipping the Ferryman:
“With an ear that searches and regularly finds language that complicates and fulfills his apparently Manichean vision, R.G.Evans navigates between reverence and irreverence in these often terrific poems. Death and fire dominate their imagery, and a kind of spiritual ferocity their tone. These are spiritual poems that don't attempt to console. They are poems of complicity. Their speaker wants “more,” and knows something about its price. To overtip the ferryman suggests the anxiety behind the journey, the uncertainty of the arrival. It doesn't get much better than this.”  —Stephen Dunn

Month Without a Moon

Any night I like, I can rise instead of the moon
that has forgotten us, not a thought of our sad lot,
and roam the darkened oblongs of the dunes.

Once you said the moon was some pale god
who turned away his face to cause the tides,
and once you said that, I of course believed

that you were mad. Now the ghost crab guides
me to the edge where land is not land, sea not sea,
and all the sky above is one dark dream.

This is the month with no full moon. You
were its prophet, and I am standing on the seam
between belief and what I know is true.


Here's the prompt Bob sent us home with. Give it a try:

In one of the most famous scenes from the film Jaws, Quint, Brody and Hooper sit in the cabin of the Orca drinking and comparing various scars they have (moray eel bite, thresher shark’s tail). Quint reveals that one mark on his arm is a tattoo he had removed: the USS Indianapolis. He proceeds to tell the true story of the Indianapolis, the ship that delivered the Hiroshima bomb and which ultimately sank, many of the survivors attacked by sharks before the rest could be rescued.

Like Quint’s, the marks on our bodies tell the stories of our lives.

Make a list of all your bodily markings: scars, tattoos, piercings, etc. If you want to go deeper, you can list your emotional scars as well.

Write a poem either 1) in the voice of one of your scars speaking to you (recalling how it came to be, what it has to teach you, etc.) or 2) in the form of a dialogue between two of your scars/markings speaking about you in the third person.