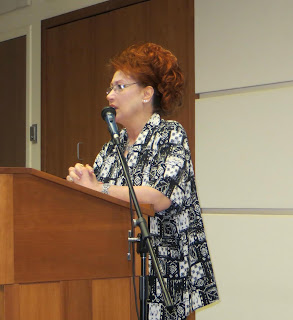 Adele Kenny is the author of several collections of poetry, most recently A Lightness, A Thirst, or Nothing at All. Her poems have been published in numerous journals and anthologies. She is the recipient of two NJ State Arts Council poetry fellowships, the first place Merit Book and Henderson Awards, a Merton Poetry of the Sacred Award, the 2012 International Book Award for Poetry, and Kean University’s Distinguished Alumni Award. She is the founding director of the Carriage House Poetry Series and the poetry editor of Tiferet Journal. One of her poems appeared on the marquee of the Rialto West Theater in NYC as part of the 42nd Street Art Project. She has twice been a featured reader at the Geraldine R. Dodge Poetry Festival.

A Lightness, A Thirst, or Nothing at All is a collection of 52 prose poems that are deeply rooted in imagery and metaphor. They contain complete sentences and deliberate fragments, speak the language of dreams, and give a nod to the surreal. They often include strange layers of language in which what appears to be abstraction isn’t. Lightness picks up the spiritual journey begun in the earlier What Matters and moves that journey forward.

Praise for A Lightness, A Thirst, or Nothing at All:
"Hardwired by Kenny’s gift for dimension and her profound understanding of the human spirit, the poems in this collection show us the healing power of attention and awareness. Kenny’s words move associatively (and swiftly) through image and sound, and she makes a particular music that is uniquely her own. Impelled by lyrical precision, these poems cast light on what we are learning, and what we already know, about ourselves. This collection contemplates the ways in which the “interior life and the outside world intersect” and is a must-read for anyone interested in looking beneath the surface of things. In addition, through the process of these poems, Kenny leads us to see that, as C. S. Lewis wrote of the spiritual journey, '… there must be a real giving up of the self.'”—Alex Pinto, Tiferet, Spring 2015 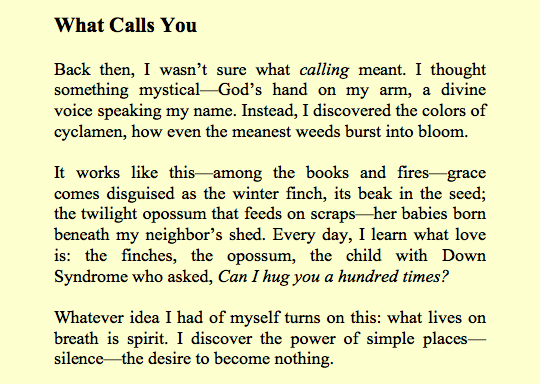 Adele sent us home with these suggestions for revision. Hopefully, you can put them to use on the poems you've written to the prompts offered by the other festival poets.
Often when I conduct poetry workshops, I give participants the following list, which is not a standard “prompt” but something I hope will be useful when you work on editing.
1. Try to write in the active, not the passive, voice. To do that, it can be helpful to remove “ing” endings and to write in the present tense (this will also create a greater sense of immediacy).
2. Be on the lookout for prepositional phrases that you might remove (articles & conjunctions too).
3. The great author Mark Twain once wrote, “When you catch an adjective, kill it. No, I don’t mean utterly, but kill most of them—then the rest will be valuable. They weaken when close together. They give strength when they are wide apart.” This is especially true in poetry. So ... as you work on a poem, think about adjectives and which ones your poem can live without. (Often the concept is already in the noun, and you don’t need a lot of adjectives to convey your meaning.)
4. Avoid clichés (and, while you’re at it, stay away from abstractions and sentimentality).
5. Show, don’t tell—through striking imagery, a strong emotional center, and an integrated whole of language, form and meaning.
6. Challenge the ordinary, connect, reveal, surprise! And … remember that a poem should mean more than the words it contains.
7. Create a new resonance for your readers, a lit spark that doesn’t go out when the poem is “over.”
8. If you take a risk, make it a big one; if your poem is edgy, take it all the way to the farthest edge.
9. Understand that overstatement and the obvious are deadly when it comes to writing poetry. Don’t ramble on, and don’t try to explain everything. Think about this: a poem with only five great lines should be five lines long.
10. Bring your poem to closure with a dazzling dismount. (Be careful not to undercut your poem’s “authority” by ending with trivia or a “so what” line that doesn’t make your readers gasp.)
Something to Try:
1. Take a look at a poem you’ve already written and apply the preceding items as a checklist for editing.
2. Go through your poem one item at a time and see if there are changes you can make.
3. After you’ve finished, compare your original version and the newly edited one. Is the edited version stronger than the original?
Posted by Diane Lockward at 10:00 AM

Email ThisBlogThis!Share to TwitterShare to FacebookShare to Pinterest
Labels: a lightness a thirst or nothing at all, Adele Kenny, prose poems, welcome rain books