I seem to have disappeared from the Blogosphere, but I'm still here. First, as you must know, those of us in New Jersey got slammed with Hurricane Sandy. I'm very lucky in that my house sustained no damage. But take a look at this house just a few blocks away. 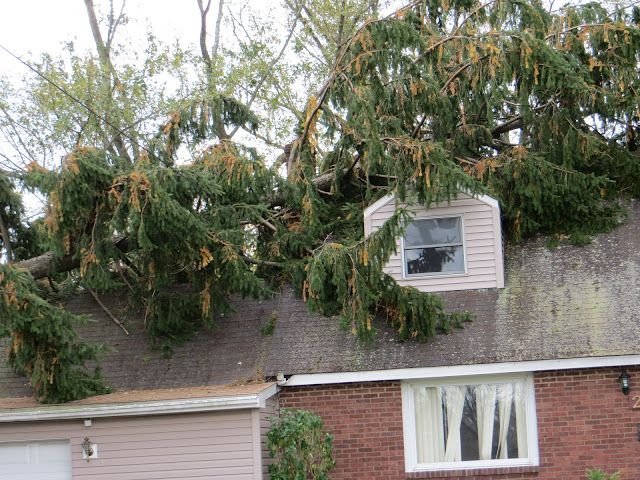 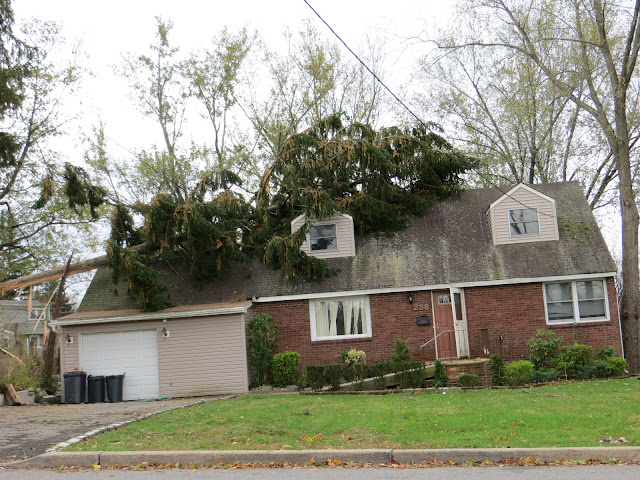 If you look to the left of the garage, you'll see where the tree trunk just snapped. But because the tree was so close to the house, the roof appears to have sustained minimal damage.

We lost lots and lots of branches that snapped off and fell, but fortunately we had recently removed two large dead trees and trimmed other living trees, so no trees crashed. As with last year's storm, leaves were still on trees, making them more subject to toppling.

The hurricane rolled in on Monday. At 7:15 that night the power went out. My husband had cleverly contrived to be in Florida—same stunt he pulled during last year's horrible October storm—so I was in the dark and on my own. At least it wasn't initially as cold as last year. Another lucky break was that we did not get the 12 inches of rain we were supposed to have received.

The next day I went to my daughter's house as she had not lost power. While there I could get on the internet and hear the sound of other humans and enjoy the light. But I didn't want to sleep there. What kept me sane at home was the Kindle Fire onto which I'd wisely downloaded a book. Since the Kindle is backlit, it was great for reading in the dark. Then I could get emails on my cell phone, but I don't have a smart phone so it was hard to send notes. Not a big deal.

Husband arrived home on Wednesday after a two-day delay. On Thursday at noon all things FIOS disappeared. No phone, no tv, no internet. I kept telling myself to be grateful that I still had heat and light while others had lost everything—and I was grateful. Still, it was frustrating to have had those things and then lost them again. All of that was restored late Monday afternoon.

Then yesterday we had the Nor'easter, Athena. Again, no damage here, but I really feel for the people who've already lost their homes and for those still without power. Also, some people in this area who'd had power restored lost it again. A big problem around here is getting gas. We're on an odd-even day plan which has helped a bit, but the lines are still very long as some gas stations have still not had their power restored and gas deliveries seem a bit spotty. Another smart move I made in anticipation of the hurricane was filling up, so I should be good for another week or so if I continue to hoard what I have in the tank.

Here's a picture of today's snow. Pretty, yes? But I'm sure I'm not the only one who thinks a second storm was a bit too cruel. 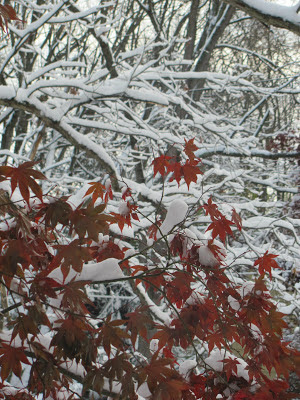 At least I've had a good start on cleaning out my bookshelves.

Posted by Diane Lockward at 1:37 PM