It's my pleasure to host a salon to celebrate the publication of What Matters, the newest poetry collection by Adele Kenny. Adele lives a life fully immersed in poetry. She has for years run a workshop at her home. Many New Jersey poets can trace their published poems back to Adele's living room. She also has for years run the Carriage House Reading Series in Fanwood, NJ, and has hosted many poets there. I've heard Adele read several times, have read her books, and am now happy to hear what she has to say about her new book. Please join us.


Diane:  Tell us how you went about writing these poems and assembling them into a collection.

Adele:  My muse is fickle – she takes three-martini lunches, and heads to the south of France for months at a time – which means that I don’t write as often as I’d like. The forty-seven poems in this collection were written over the past ten years.

For me, poems almost always begin as single images. This was especially true of the poems in this collection. A very few of the poems also appeared in Chosen Ghosts but were extensively revised for What Matters; I included them because they are part of a “story” that overlaps from one book to the other, just as life experiences sometimes overlap. My goal was to create a collection of poems that would be intimate rather than private, a collection that would touch the universal part of readers’ hearts, as well as the personal.

Diane:  Tell us the story behind your cover.

Adele:  My good friend and fellow poet Edwin Romond wrote of the cover, “I don't think I know of any cover of a poetry collection that better captures the soul of the contents than yours. Absolutely perfect.” I was grateful for that note from Ed because the cover painting (Beata Beatrix by Dante Gabriel Rossetti – poet, painter, and Christina Rossetti’s brother) was the first picture that came to mind when my publisher asked if I had any ideas for the cover illustration. I’d written an ekphrastic poem based on the painting (“In Memory Of,” in section three of the book), and the painting image admittedly haunts me.

A long-time fan of the Pre-Raphaelites, I feel close to Beata, which, I believe, “speaks” the meaning of What Matters: loss, grief, coming to terms, healing, survival – all things I suspect were present for  Rossetti when he made the painting, although his particular circumstances were quite different. In addition, Rossetti explained in a letter that he portrayed the woman in Beata (his wife Lizzie) in a state of “spiritual transformation” – a fundamental theme of What Matters.

I considered other possibilities for the cover but always came back to Beata. My publisher (John Weber at Welcome Rain Publishers) generously purchased the rights to use the image, which is housed in London’s Tate Gallery.

Diane:  How did you select the title for your book?

Adele:  Strangely enough, What Matters had a title several years before it became a book. Like many images in the poems, the title came to me late one night. It literally “popped into my mind”  before I’d even begun to think of the poems in terms of a collection. I woke up the next morning knowing that What Matters would be the title of my next book. That day I took a long look at my newer poems (revised, written, and in process) and began to see them arranged in sections relative to the experiences that drove them. The title powered the long process of writing, editing, tweaking, and selecting.

Diane:  What do you hope readers will take away from your book?

Adele:  What Matters is a book about survival, specifically my own experience with breast cancer (the three sections of the book – before, during, and after), but it’s more than just a collection of poems about an illness. In fact, few of the poems focus exclusively on that. Interestingly, though, as it worked out, the official publication month of the book is October, and October is National Breast Cancer Awareness Month. I like to think that What Matters offers meaning and hope to readers who have dealt with the illness themselves or through family members and friends.

Most importantly, What Matters affirms that we’re all survivors of one thing or another (grief, fear, illness, losses of loved ones); individual experiences differ, but we’re all survivors. What Matters looks at life as it is and celebrates the moments in which healing begins, the ways in which the human spirit survives, and the ways in which we remember how to live. I’ve come to believe that one of the things poetry does best is to tell readers that they’re not alone. I hope the poems in What Matters do that.

Diane:  Please choose a poem for us and, if you like, tell us why you chose this one.

Adele:  The poem I’ve chosen is “Like I Said” because it’s one of the lighter poems in the collection and shows that sometimes it’s good to take stock of things and to “laugh at life” (it’s also a “goof” on grammar and pop culture) – the point being that, despite whatever else, “what matters” is the peace we make within ourselves.

Okay, so it’s Sunday. I didn’t
go to church. I’m an Irish Catholic,
I know about sin, but I was tired and
just didn’t feel like getting dressed.

On Thursday night, I fell and broke
a slat from the garden fence. My
hip still hurts – the bruise is as big
as my Yorkie’s head.

That would have been enough, but
this morning the vacuum coughed up
a hairball and quit. The only food in
the fridge is a bearded yogurt.

The washing machine refuses to spin.
There’s no clean underwear left, so
I’m not wearing any. Like I said,
I was tired; I didn’t feel like getting

dressed, so I didn’t go to church and
abdicated rights to all that grace.
I put on a pair of dirty jeans, a dirty
shirt, and sat outdoors all morning.

I did nothing but talk to my dogs,
watch squirrels, and wonder what it
might be like to nibble Prozac from
Johnny Depp’s lower lip.


Let's all gather round while Adele reads her poem for us: 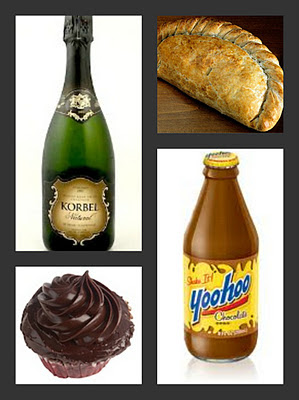 Now it's time to enjoy the snacks that Adele has requested. First, her favorite beverages, Korbel Natural Champagne and Yoo-Hoo. Then something sweet: dark-chocolate cupcakes with dark chocolate frosting and something savory: Cornish Pasties (small D-shaped pies filled with meats and veggies). These snacks might very well serve as a metaphor for the collection.


Overheard at the party: “In Adele Kenny's finely wrought meditations on grief and loss, she never forgets that she's a maker of poems; in other words, that the poem in its entirety is more important than any one of its utterances, phrasings, or laments. What Matters straddles two of the exigencies of the human condition: diminishment and endurance. It abounds with poems that skillfully earn their sentiments.” (Stephen Dunn)


Before you leave, be sure to pick up a copy of What Matters. Feel free to add comments in the Comments section.

For another poem from the book, check out Survivor which was featured on October 1 at Your Daily Poem, in honor of Breast Cancer Awareness Month.

Visit Adele's blog, The Music in It, for weekly prompts.
Posted by Diane Lockward at 9:44 AM